Skip to content
Home » Articles » Uncategorized » An Analysis Of The Battle Between Google and Seznam: A Close Call

An Analysis Of The Battle Between Google and Seznam: A Close Call

If you project all of Google’s market share in Europe on to a map most of Europe would be covered with the colors of Google. Even worldwide there are few countries where Google is not the dominant force.

One of the countries in which that is the case is Czech. There Seznam has been the number one for years. Web measurement service Toplist however now suggests that Seznam has been taken over by Google. Seznam however believes the numbers are not right at all. Has Google taken another step in world domination or are they just closing in on the local giants?

Looking at the numbers which Toplist gave out there is no denying: Google is to say the least coming close to Seznam in numbers. Seznam has a whole still has the biggest market share but Google sites are closing in. Google.cz is second with a 31.1% market share and if you combine that number with Google.com and Google.sk in total they account for 47.2%, about 5% more than the combined Seznam sites.

The way this is calculated is not based on number of searches, like we are used to here, but on percentage of clicks send to monitored websites. As you may know Google isn’t too easy in giving away numbers which can help us determine the exact market share. That makes it hard to really see if the numbers provided by Toplist are correct or not.

One thing which should be taken into account is the way the Google sites are calculated. The combined Google sites have a large market share, but they are based on people from other countries living in Czech. There are for example many Slovakians in Czech who use Google.sk. Take a look at this list for example and be the judge:

It is not clear how serious we should take the numbers. But you could say that if you calculate all these Google sites as one, why not calculate Firmy’s numbers with those of Seznam, they belong together after all.

“We have stated from the very beginning that we do not accept this interpretation of Toplist statistics. And we are very unhappy that nobody asked us about our opinion. The truth is that our competitor is bigger in total for searching of Czech websites from Czech, Slovak and dotcom domains put together. But Seznam.cz operates only on the Czech market and has only one domain. So we would say this is irrelevant data.”

Only last year Google was way behind Seznam in market shares. Seznam had a ‘lead’ of about 20%. No matter how you look at the numbers, Google has closed that gap (almost) entirely. What happened? What has changed?

There are several reasons why Google has become more popular in Czech. First of all Google has been holding an actual marketing campaign in the Eastern European country. A TV campaign has made the presence of Google more visible for many people in Czech.

Secondly there is the type of visitors using Google and Seznam. Seznam is more of the ‘old’ search engine (a better word would actually be portal). That means that most users are over 35. The younger generation is now choosing Google.

The third reason is that Google seems to have learned from the past. In countries like Czech the local elements are very important. That means you really need to be using them. Until recently Google was treating Google.cz as just another Google site with some US engineers working on it. They have taken up more of the local knowledge, which seems to be working.

Finally Google has been pushing local products and more applications in the Czech language.

Why is Seznam that popular anyway?

Being one of the few countries in which Google is not the biggest search engine it’s interesting to take a look at why Seznam was so popular in the first place. How did Seznam survive that long? 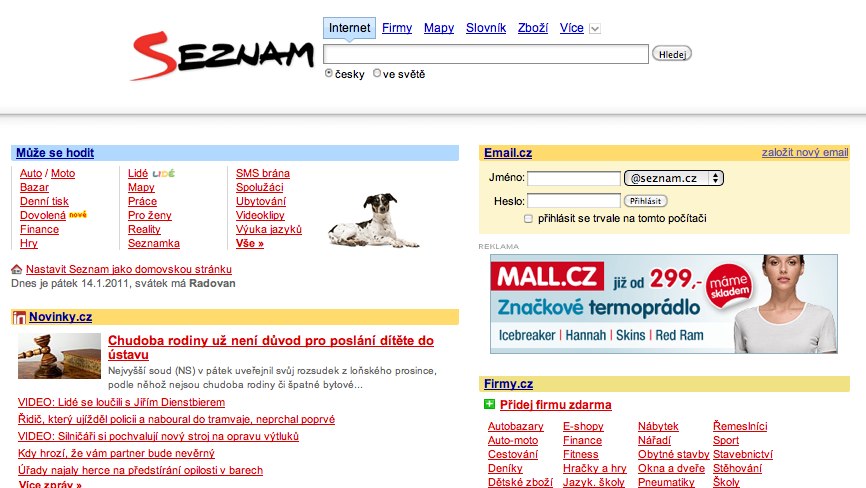 First, let it be noted that in almost every European country there are still one or more local search engines with at least a little bit of market share. That is because of the cultural element. People like the fact that the website comes from their own country. Czechs have that strongly, they are a nationalistic country which prefers local products. Did you for example know that Coca Cola is not the biggest soda brand in Czech, but Kofola is? So culture matters. But there is more.

Another reason of Seznam’s popularity has been strong because Google just didn’t care that much. That means that for example they didn’t have an office in Prague. That means the presence was low and presence makes that you can built local relationships with influentials: the local companies. “Letting the market slip” didn’t help Google’s market share.

Another major reason why Google couldn’t beat Seznam is that when it comes to the Czech language they just couldn’t compete. Seznam simply better understood the way Czechs search. It’s the same issue Google runs into in for example Russia with Yandex. Google was using English speaking engineers which have a different look on how people formulate queries in another language. Since they didn’t use the locals they just didn’t deliver the right quality of product.

Finally another reason why Seznam beat Google is that Seznam has a lot of extra products and sites. It’s a portal, but they also deliver a very good map-product as well as a very interesting business directory Firmy.cz, which generates a lot of traffic.

So did Google win over the Czechs?

It’s still hard to say if Seznam has lost their position to Google. One thing is clear: Google is taking Czech serious and is making an effort into getting hold of that market share too. One step closer to world dominance.

Bas van den Beld
This article was originally written and published for Searchengineland and has been slightly re-written to post here. Google is the...
Read More
Join our 9,000+ Subscribers
Receive daily, weekly or monthly updates on our latest content