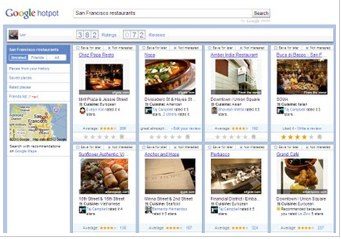 Slowly the lines of the new “Google Me” are showing up. Eric Schmidt already announced, in between his weird statements, that Google will not be making a new Facebook but will be showing us “Social layers” on top of the search results: adjustments to the SERPS or other Google products which will add to the social experience.

Now its time for the next layer. On the day Facebook announced their ‘messaging system’, which will probably not be the Gmail killer which it was suggested to be, Google launched “Hotpot” a personalized recommendations engine based on what you and your friends are liking.

Hotpot is another step in social AND in local. It looks at Google Places data and then looks at reviews and ratings from you and your friends. Based on these ratings it looks for similarities and then recommends you a place.

Google will need a lot of reviews from you and your friends to get this working. They already have a large amount of information but they want more to be as accurate as possible. Therefore they created the Hotpot rating app with which you can rate the places you’ve been and invite your friends to it. The rating can be done both online and on Android.

You can also do it online at http://www.google.com/hotpot and to be honest, it works pretty smooth and nice. Do a search on a location for for examples “restaurants London city” and you can immediately start rating.

Now when you do a search in the “Places” filter you will see all the ratings you made related to that specific search. Recommendations can also be seen when searching on Google Maps, Google Maps for Android or when checking the Place pages for a specific business.

Another step to local and social for Google therefore. But will this work? The weird thing about the new feature is that you need to sign up for a Places nickname, so its not your Google account, though it is related to one another. This probably has something to do with privacy matters as Vanessa Fox explains on Searchengineland. Google told her:

“Users’ ratings and reviews appear only in the Places profile, not in the Google profile. We have done this to ensure that users have control over how their reviews appear to the public.”

Finally, don’t we want to do this in tools we already use? Like for example Foursquare or Yelp? It would have made more sense to me if Google would have bought Foursquare and integrated this into that.

As for the job of the SEO: here’s another challenge for you…