First there was Jeeves

It wasn’t that long ago that the internet was brand-spanking-new. I remember trying to find websites by simply typing in a guestimate of a web URL into Internet Explorer. I would try things like “www.surfboardsforsale.com” or www.thingstodowhenyourebored.com”.  Then somebody told me that I should try using a search engine. Wow! It sounded so amazing and sophisticated. Now I wouldn’t have to guess random URL’s any more, which is a shame really, I had a lot of fun doing that. 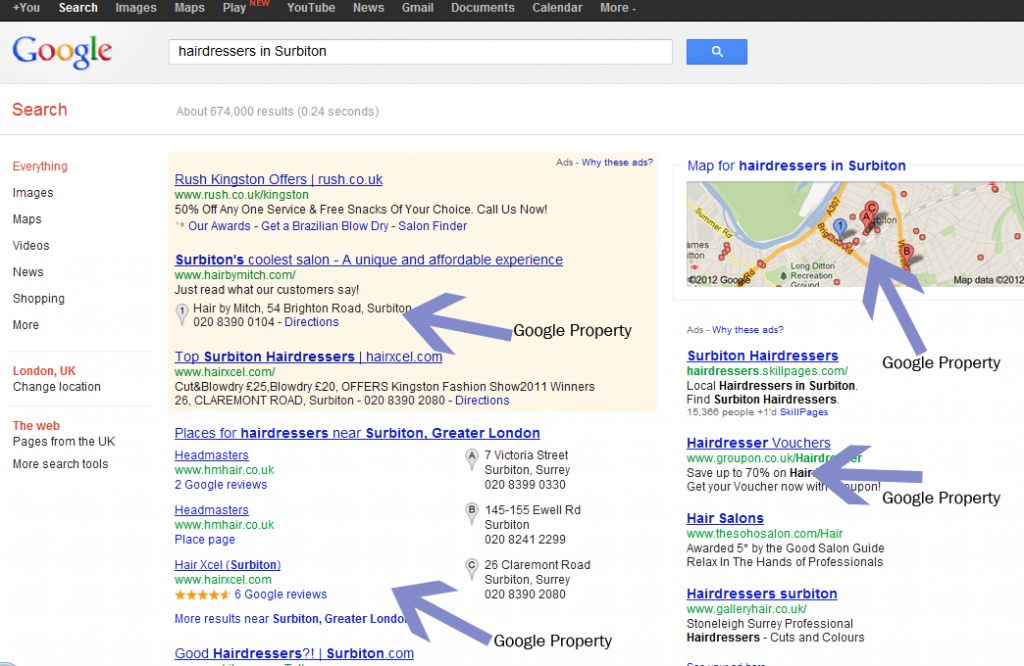 All of a sudden, the likes of Altavista, Lycos, Yahoo and Google changed my world. I could find anything I wanted, whenever I wanted. At least that was the idea. In reality, what actually happened was that I found more and more rubbish. I asked Jeeves every question under the sun but he never gave me a decent answer, he couldn’t even tell me how to cheat in my maths exam!

For various reasons, Google began to attract the largest percentage of “searches”. Apparently, it was the easiest search engine to use, and it gave the most relevant results. The real beauty of Google was that it was idiot proof. It was so simple to use, even your 90 year old Granddad could use it. More and more people “made the switch” and all of a sudden Google had by far the biggest slice of the pie. And that’s the way things have remained for a relatively long time. At least until now.

Every time you look at the Google SERPS, something has changed. Update after update has moved us further away from what we all fell in love with in the first place; Google’s simplicity. Anyone that works in SEO will have had those typical conversations.

“We can’t find the login details for the Google local account, or was that a Google business listing account, no, wasn’t it a Google+ page we set up for that client? No, it was a Google products account, but which Gmail address is that linked with? – let’s just set up a new account and start again!”

Admittedly, Google have come a long way and it’s not all been bad. Spammers now have to work harder for their bread and I’d like to think that Google has made massive contributions to the online universe. But have they really done it all for free? All of a sudden, the first page of Google is a window display for all the different Google services. You can get your name and face next to your work, as long as you attach it to your Google+ profile using rel=”author”, you can get beautiful images of your products shown in the SERPS, as long as you use Google products, and of course, you can buy your way to the top with quality Google PPC campaigns.

But it’s OK, their tools have always been superior and at zero cost, so we’ve all been happy to remain loyal. Yesterday, however, I logged into Google Analytics, which I’ve always loved because it offers comprehensive data for free. I was astonished to see Google pushing their premium Google analytics package. Hmmmm, interesting. What Digital Marketer wouldn’t want premium analytics and the chance to get one up on the competition?

A Glimpse of Google’s Future

I think what I found could be a glimpse of Google’s future. Premium Google Analytics comes with a premium price tag! This is exceptionally un-characteristic of Google, especially when you realise that most of the information offered in the premium package used to be offered for free.

Was this Google’s master plan? Are they simply giant “drug dealers”, giving us the “good stuff” for free, then when we are well and truly “hooked”, SLAM “show me the money”.

That’s what it looks like with the “Premium” Analytics package. It’s as if they thought of every little detail in advance. Maybe the privacy settings weren’t initiated to “protect” users privacy after all? Just saying.  What do you say? Surely “hiding” all the search terms done when logged in to a Google Account couldn’t have been beneficial for Google could it? Also by “hiding” these search terms behind https doesn’t that mean NO OTHER analytics package can access this data either, oh wait, except from Google Premium Analytics. Weird that.

The truth is, Google’s dominance, or monopoly depending on your stand point, hasn’t gone un-noticed. The Financial Times covered the formal US Government investigation after complaints were made that Google were putting its own services ahead of other companies, “robbing rivals of internet traffic”. Google responded with confidence quoting that;

“It’s still unclear exactly what the FTC’s concerns are, but we’re clear about where we stand. Since the beginning, we have been guided by the idea that if we focus on the user, all else will follow.”

I think the question that seems most obvious is; which user? Google seem to be confused about the differences between Internet users and Google users. Surely, they shouldn’t be viewed as one and the same.

The Best Time to Compete?

Maybe this is the time for the likes of Yahoo and Bing to fill the original role of Google, being a search engine not a self-engine!

People, especially in Britain, don’t like to feel that they are being controlled, or watched and the way Google are going, people are going to be looking for a simple service that they can trust and feel comfortable using. Have we trusted Google too much?

Whatever we think or say about Google and the Digital world, one thing we cannot ignore is that times are changing – for better or worse is debateable, and debate, I’m certain we will continue to do.

“Google should be like a Swiss Army knife: clean, simple, the tool you want to take everywhere.”
Marissa Mayer

“Google’s mission is to organize the world‘s information and make it universally accessible and useful.”
Google