Last week Google announced that it is dropping Authorship profile photos and circle counts in the SERPS. The reason? To clean up the SERPS. And hey, as Google’s Webmaster Trends analyst John Mueller explained: “experiments indicate that click-through behavior on this new less-cluttered design is similar to the previous one.”

Also last week Barry wrote a post here on State of Digital about how Google is slowly on it’s way to dominate the entire web. When Google announced the Profile Pictures change the response from some was that this was yet another one of those moves that Barry ‘hates’ so much. We as SEO’s were ‘used’ to get the authorship profiles up and running and now that Google doesn’t need them anymore they just toss it out.

So, Google *incentivate* us to implement Authorship and then takes the incentive away after a while, once we have fallen for it… sigh.

Do people who say this have a point? Maybe. But, there maybe more.

Let’s put on our tinfoil hat on for a minute and think about some conspiracy things based on Barry’s and John’s words and what we see in the SERPS.

So put on your tinfoil hat and think about these two things:

What did Mueller really say?

“experiments indicate that click-through behavior on this new less-cluttered design is similar to the previous one.”

What is he really saying? Is he actually saying that click-through rates on results with a profile photo are similar to the ones without?

What Mueller says is that click-through behavior on the new design is similar. That doesn’t have to be the actual result, it can be on any of the other results. What he also could be saying is that as many people on average click on whatever link in a search result page when that search result page has author profile images or not. So it could be the results above or below the profile picture.

So (tinfoil hat) maybe Google wants the profile pictures out for another reason? Maybe it is blocking clicks on one of the other results in the search results?

I can hear you think. “Yeah Bas, that’s taking a bit far.”

Well maybe. Words can be interpreted in many different ways. But take a look at this. This is the search result page when looking for Barry’s post from last week:

As you can see the profile picture has gone. It just shows Barry’s name. What you should know here is that I am not logged in here. Check out what happens when I am logged in: 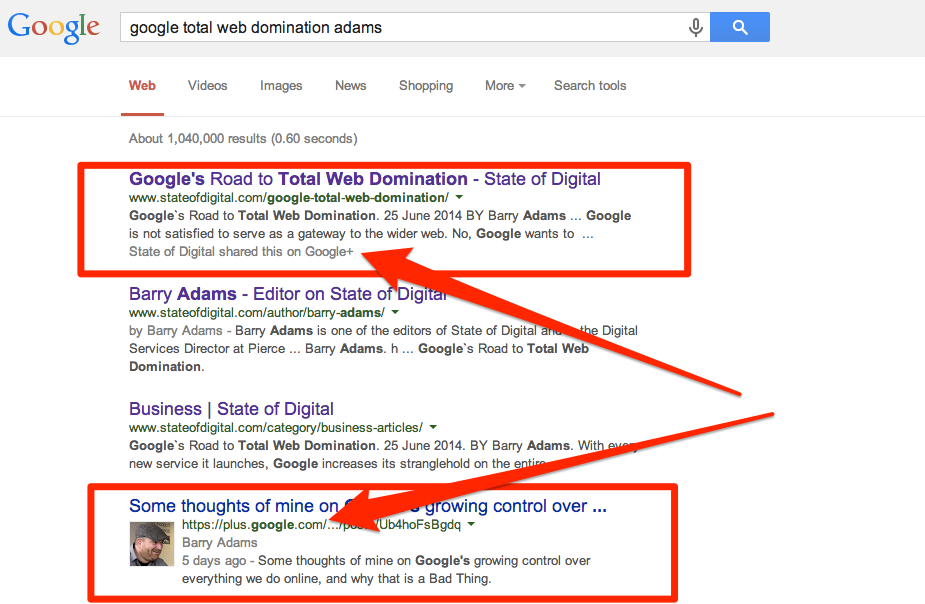 See the difference? The result still doesn’t have the profile image. But wait a minute. What do we see on spot #3? Isn’t that a profile picture of Barry? Why yes it is!

The result is however not the actual article, but a link to Barry’s Google+ update about the article. That does still have a profile picture!

So what happened to ‘cleaning up the visual design of our search results’? Why take away something which you are leaving in somewhere else? Could it be that Google (again, tinfoil hat) is hoping that you still click on the result with the picture, but preferably the one which goes to Google+? And maybe they thought: if they don’t click on the G+ result, why don’t we take away the image on the posts so the Google+ result gets some more attention?

Now I admit. This does seem a bit too far-fetched. It can’t be possible that Google took out the profile pictures on authorship just to push Google+ could it? Google would never do that. Right…? Or is Google going to take out these profile pictures as well?

I’m curious about your thoughts. Is this too far fetched or could there be a different reason for taking out profile pictures in search results than just ‘cleaning up the visual design of our search results’?