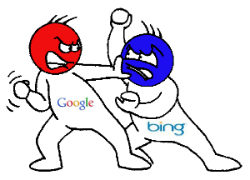 Bing calls Google Names but does Gain Some Market Share

Bing and Google will probably never be best friends. The two biggest ‘official’ search engines got into a fight several months ago when Bing allegedly copied Google’s search results. Ever since the tension between the two has been there. Google will probably remain the biggest for a while, but Bing is closing in on Google according to the latest numbers.

It is not those numbers however but a Bing “Easter Egg” which got the most attention this weekend. A Googler noted that Bing had been hiding some interesting results which seemed to be a ‘pinch’ towards Google on specific searches.

Software engineer Andy Arnt found two results which seemed to have a negative message to Google inside the search results. A search for “more evil than satan himself” returned the results “10^100“, while “Hiybbprqag” gave back “hiybbprqag (orcish) = whiner (common)“.

The results now seem to be taken down by Bing, who has not responded yet, after Searchengineland reported about this.

10^100 stands for “Googol”, which off course is where Google’s name comes from. In other words, they are calling Google “Evil”, which again refers to Google’s motto “Don’t be evil”.

The term “Hiybbprqag” was used by Google to ‘prove’ that Bing was copying their search results (here are some interviews about that with Danny Sullivan and Bing’s Stefan Weitz). Bing now had placed a line within the results saying “hiybbprqag (orcish) = whiner (common)”. 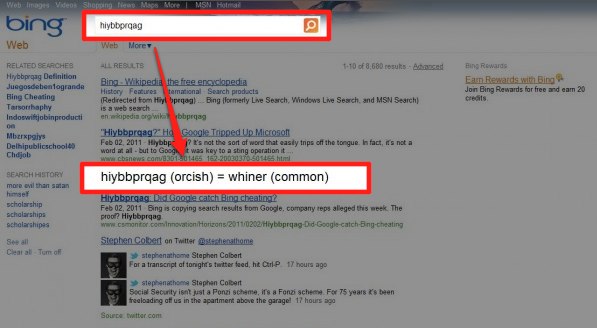 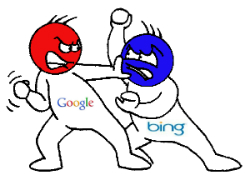 While engineers are fooling around with easter eggs and discovering them, the users however are simply trying to get answers to their searches. And according to Experian Hitwise, Bing has (again) gained some market share from Google.

In August 65.09 percent of all U.S. searches were done on Google, making them still the biggest search engine in the US. The combined Bing-powered search is getting 28.99 percent of the searches, making it the second largest search engine. More importantly: Bing gained 3% market share. Google however lost 1% market share. So Bing won about 4% compared to Google. Surprisingly enough however Yahoo gained the most market share with an increase of 5%.