Skip to content
Home » Articles » Uncategorized » Bing gaining share in the US: success rate much higher than Google

Bing gaining share in the US: success rate much higher than Google

We keep on asking for a competitor for Google. And all of our eyes are then focussed at Bing. So far in Europe we feel kind of left behind when it comes to Bing, even though they recently started moving towards European mainland by launching in France.

If we however look at the US as an example of what lies ahead we might see some interesting developments in the future. New numbers from Hitwise tell us that in February Google lost some market share, where Bing is gaining.

Google still takes up almost 67% of all searches in the US but Bing is closing in really slowly. Bing-powered search is now on 28.48 percent while Bing.com itself accounts for 13.5%. Count Yahoo with that (15%) and you see that Bing has got quite a nice market share going in the US. We have to take into account that many of Bing’s searches are not only on the Bing website but still they are doing well.

What is interesting is that Hitwise also looked at success rates: the searches which actually resulted in a click to a website, so not a search which was performed and then done again or in a different way because the searcher didn’t find the right link to click on. Here both Bing and Yahoo score a lot better than Google. More than 81% of searches ended up in a click on these engines, while on Google “only” 65.8% ended up in a click to a website.

This could indicate that Bing’s results are better, but it can also mean that Google provides more information on the result page itself.

Did Instant influence the length of search queries?

Hitwise also looked at the length of search queries. With the arrival of Instant Search, which Bing will roll out in a similar way soon, some analysts suggested that longer search queries might be typed in less often because the suggestions would make it more tempting to stop typing sooner.

The numbers Hitwise is giving us do show that longer search queries (five to eight words) went down 2 percent compared to January 2011, and that one word queries went up 2 percent, but there is no real sign of actual influence of Instant on that. 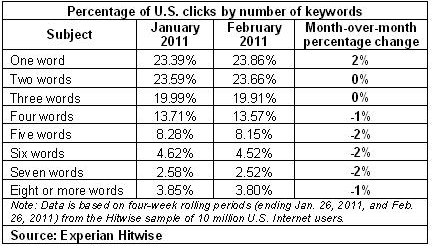