Skip to content
Home » Articles » Uncategorized » Bing integrates Facebook into their search: the next step in social search integration 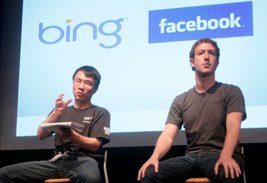 Bing integrates Facebook into their search: the next step in social search integration

It was clear that anytime soon something was going to happen between Bing and Facebook. Microsoft and Facebook already were working together on the search inside Facebook, but last night they announced a further cooperation. In the US (not in Europe yet!) Bing now uses Facebook “like” data to give you results from within your social circle on Facebook. Also they will be showing Facebook-powered people search results

The move is mainly important for Bing to get more attention for their search engine. They now have access to data which their biggest rivals Google don’t have. That makes that the step towards Bing might become easier for many users. The deal however won’t upset the search landscape just now, but it has potential.

So how does it work?

There are already a few extensive posts out there who describe exactly what you can expect from the Facebook integration on Bing. I won’t go and repeat that here, but I would like to highlight the main changes which you will be seeing on Bing in the future.

The biggest change is the extra results you will see on the result pages saying “Liked by your Facebook friends”. You will see links there, relevant to your search off course, which were liked by one of more of your friends. For this to happen you do need to connect your Facebook account to Bing.

The feature is similar to the “results from your social circle” we can see on Google. The biggest difference here off course being that Google looks into different sources where Bing looks in only the most popular one: Facebook. The Google feature doesn’t really work that well yet, the Bing feature needs to prove itself. Will we be getting better results from Facebook? Time will tell.

A few years ago when you searched for a name you would find the Wikipedia results first (if people had a page), then you would find blog pages. These days the people search is all about social media. Where can we find a persons Twitter profile, his Facebook page or another local social network page.

Google is giving us their Google Profile pages, but Bing now gives us the Facebook pages. It is a feature with potential but as it looks now its not quite there yet. As I wrote a couple of months ago in my post “What “Google Me” should be” there is a huge opportunity there for the search engines to claim the space of people search. The fact that Bing now shows the Facebook profile pages is the first step. But to be honest I expected a little bit more. With the connection to Facebook Bing should be able to find out one way or another which person you are looking for, even if there are more people with the same name. It looks like Bing doesn’t really have that entirely for now. But maybe that will come.

Not a Google killer

What does this mean for the search landscape? The Facebook deal is something which Google will look at with envy. In the past few weeks both Marissa Mayer and CEO Eric Schmidt have hinted towards the possibility of getting Facebook data into their search results. As Schmidt said Google was willing to get it one way or another, with or without deal.

At that time we, and off course also Mayer and Schmidt, already knew by the rumors that Facebook and Bing were talking about extending their deal, resulting in what we are seeing today. They will not have been pleased. The Facebook data is one of the missing elements in Google’s social search efforts.

This change however will not be a Google killer. There are many reasons why people choose a specific search engine. Wether or not Facebook data is in there could be one of them, but not for everybody. The hardcore “Facebookers” will most probably not first go to Bing to find Facebook results when they are already on Facebook at that time. But if Bing plays their cards right they might get a lot of goodwill out of it and a lot of people who are willing to try Bing now. But the new Google social layers which are expected very soon (Google usually tries to grab the momentum away so I’m expecting something within days now) will without a doubt have Facebook-like features in there.

When Facebook is involved one thing which is always comes along is privacy matters. What will happen with the data Microsoft and Facebook are now sharing. As Danny Sullivan points out in his post it on first sight looks as if privacy is taken care of. But a closer look shows that there are still some question marks about that. Will the data which Bing gathers based on your searches also be given away to Facebook for example? What can Facebook see because you are logged in to both? Questions that will without a doubt be answered in the future.

So what does this mean for SEO? Do we have another “death of SEO”-post ready for this? Absolutely not. As said many times before, SEO is changing but its not dead. At the A4U Expo conference this week Will Critchlow showed us that Facebook itself now is becoming an interesting area to optimize for. Based on a number of likes your blogpost can now show up in the Facebook search results. The change Facebook and Bing announced yesterday will only mean yet another boost for the vertical search like in Facebook, but also outside of Facebook, within Bing.

That makes SEO more challenging. How will we be able to make pages rank on specific likes, where do we start on that? Questions that are already being answered by SEOs around the world as we speak. At the moment the results from Facebook are specifically presented next to the regular results, not integrated yet, but that can still come. It now means an extra possibility to rank in Bing.

Finally, should we care about this Facebook – Bing integration? Yes we should off course. It makes sense that the two make this move. Facebook and Google have not been the best of friends and are in a battle of being “the biggest online” so the move towards Bing is understandable.

Yet, its just the first move of many we can expect in the coming weeks and months, or even days. Google will respond to this and Bing and Facebook will optimize what they are doing here. So the future looks interesting. Unfortunately Bing and Facebook again decided that for now this is a “US only” feature. Let’s hope they don’t wait too long to get to Europe this time. The integration of search and social has just taken a next step. I’m curious to see what and when the following step will be.

Update: below the video which Bing send out to explain the new feature: