A recent eyetracking research performed by User Centric focussed on the differences between the two search engines. It was a follow up research from a study they performed right after the launch of Bing.

The study showed that even though there was not a lot of difference between the two, Google “won” slightly based on time spent looking at the results. Even though you can interpret that in different ways. It also showed that organic search still beats paid search by miles. Where everybody looks at the organic results paid search is being looked over in many of the searches. Only 28% of people searching on Google actually notices the paid results on the right…

Let’s first look at the battle which was the main purpose of this research: Bing or Google, which one wins?

The original study, which was performed in 2009, showed a lot of attention value for Bing. But the search engine then had just started so the searchers might have been biased or needed to get used to Bing first.

The current research shows that Google and Bing are not that far apart. Every participant on the researched made eight searches: four on Google (without Google Instant) and four on Bing.

We off course also added in the difference in general between paid and organic.

Sponsored results at the top
The sponsored results on the top in both engines are the best looked at positions for ads. More than the results on the right. Important with eyetracking studies is also the amount of time people spent looking at a particular area. This study shows people take more time looking at Google’s top ads than at Bings. At Google they look for 2.8 seconds per search task, on Bing 1.9 seconds. They also ‘gazed’ longer: 0.9 seconds opposed to 0.7 seconds.

That might indicate that those would convert better, but you have to be careful drawing that conclusion. Google produced more information per link so people needed more time.

Organic search results
Every searcher on both Bing and Google looked at the organic results. And Google seemed ‘favorite’. People spent 14.7 seconds looking at the Google results and 10.7 seconds at Bing.

But again this doesn’t have to be what it might look like. A longer look at the page might indicate more content to look at, but it could also mean they can’t find what they are looking for. That is one of the things you cannot measure with eyetracking, which does sometimes make it dangerous research.

Left pane
I myself am a vivid user of the left pane. I make filters all the time, but I know that that is me and not the average searcher. And this research shows that again. Only 17%-18% of the participants actually looked at the left pane, let alone use it.

Bing’s left pane however seems much more useful than Googles since they spent 2.9 seconds looking at it and with Google only 1.2. This might have something to do with the fact that in Bing’s left pane you can see your own history, which makes that you recognize what you see and therefore look longer.

On-hover flyouts (on Bing only)
Yesterday and last week I talked about Google’s preview options. Bing has had that for a long time. In opposite to Google that is triggered by a mouse over. This research only looked at Bing’s “flyouts” because Google didn’t have them yet when the research was done.

It turns out that most of the participants (75%) don’t use them, or use them by accident. 67% said they had never seen one before the study.

Looking at this study you cannot really say that somebody actually “won”. It seems as if people are taking more time looking at Google’s results, but does that make them better? It could also make them worse, depending how you look at them. So a winner is hard to announce in this battle. 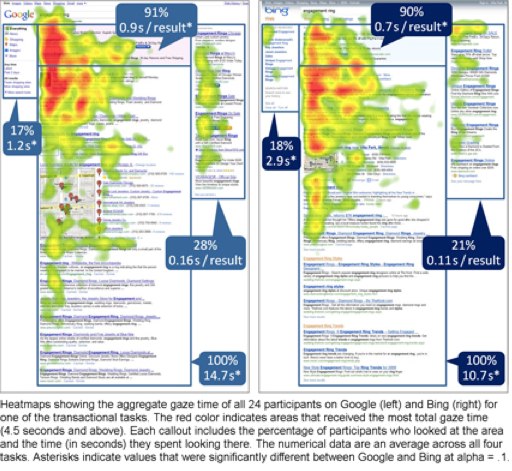 Finally we can conclude something about that other ‘battle’: paid or organic. It’s a debate which has been going around on many search platforms, both online and offline on several events: which is better, paid or organic search? In some cases it is a difficult debate to actually have because a combination of the both probably is the best way to go. But when numbers are thrown in it seems as if sometimes the discussion cannot be won.

The research clearly shows that organic wins. All participants look at the organic results. “Only” about 90% of people look at the top organic results. But the most shocking part is that not more than 28% on Google and 21% on Bing actually look at the paid search results on the right. That is extremely low. Even though we have to take into account that this is a small group of people performing searches.