Welcome to the already the fourth of our Friday Commentary. In this series every Friday experts will shine a light on the digital industry. Where are we heading, what is going on and how should we approach this as decision makers? This Friday it’s the turn of Hannah Smith, SEO Consultant at Distilled.

According to Buzzfeed, I am neither Brenda Walsh nor Kelly Taylor. I am Andrea Zuckerman.

Today, I’m ok with that. As Beverly Hills 90210 girls go (incidentally, I’m talking about the original series, not the recent revival), Andrea Zuckerman was a pretty excellent human being. She was smart and friendly, albeit almost totally forgettable.

Rewind twenty-something years,  I *really* wanted to be Kelly Taylor. She dated both Brandon Walsh and Dylan McKay. Moreover she had an excellent fringe.

Back then (yes I’m talking about mid-nineties) I had a terrible fringe, and growing up in surburban London no one ‘dated’ anyone. We snuck into films we weren’t old enough to see at the cinema and got drunk in packs in local parks. Typically you’d ‘see’ someone for a bit (that normally meant you and your friends and them and their friends would happen to end up drunk in the same park) and if it lasted beyond two weeks you’d be ‘boyfriend and girlfriend’.

There were no malls. No pastel-coloured Peach Pit diner to frequent.  Luke Perry never showed up.

No wonder I wanted to be Kelly Taylor.

I remember filling out a similar quiz back then. Of course it wouldn’t have been an online quiz, it would’ve been in a magazine. My result? I was Kelly Taylor. So were all my friends.

So what changed? How is it that I used to be Kelly Taylor, but now I’m Andrea Zuckerman?

The quiz must be broken. Luke Perry, there’s still a place for us!

What I think is interesting however, is that creating content which allows people to define themselves isn’t new.

Birds of a feather, flock together

Human beings are pack animals. We need to feel like we belong. We feel most comfortable when surrounded by people who are similar to us. How we define or categorise ourselves is important because it allows other to relate to us. The very act of self-definition makes us relatable. We need those hooks to hold on to. It’s how we connect with people.

Let me give you an example.

Today I was speaking to a journalist who I’ve never met in person. I’d left Spotify playing through my headphones, and whilst still on the phone accidentally unplugged said headphones, causing the music I’d been listening to, to blare down the phone. Suitably embarrassed at inflicting my music on this guy I’d never met, I made some flippant comment about not being able to move past my fifteen year old self when it came to music. He responded by telling me that he’d spent the morning listening to Rage Against the Machine.

Instantly we were fine.

Regardless of the truth, (i.e. he may or may not have been listening to Rage Against the Machine that morning) I felt at ease. As far as I was concerned he was like me. We had instant rapport.

Creating content that allows people to define themselves is a pretty smart move if what you’re seeking is social traction.

A study into the psychology of sharing commissioned by the New York Times back in 2011 highlighted the following motivations for sharing:

Now clearly, content that allows people to define themselves doesn’t hit all five of those motivations, but I’d suggest it hits points one (albeit probably weighted more towards ‘entertaining’ than ‘valuable’), two, three and, at a push, point four.

A key theme throughout the study was that:

Sharing is all about relationships…

Examples in the wild

So, who’s doing a good job of this?

Well, obviously I’ve already highlighted a Buzzfeed example (and there are many others) – incidentally that particular piece didn’t do as well as I would have expected. I’d guess that’s because Buzzfeed’s core audience are a little too young to remember 90210 the first time around.

Speaking of which, dear reader I’m troubled. Does this mean I’m too old for Buzzfeed? Actually, don’t answer that.

UsVsTh3m are another site doing some great work on this front. Their ‘How Middle Class are You?’ quiz has received over 100k Facebook likes and over 2,500 tweets.

For those of you who are wondering, I am ‘bog standard middle class’ – so that makes me Victor Meldrew from One Foot in the Grave.

I’ll confess to having a soft spot for UsVsTh3m – the site is so doggedly British I imagine it’s incomprehensible to anyone who’s not lived here at some point. It’s what I like most about them. If they were to drop some of the very British references they’d doubtlessly see more shares. I’m sure they know this and it’s a deliberate decision.

Quizzes aside, what other types of content let people define themselves? Check out this speed reading test from Staples:

Yes. You read that correctly. I read 256% faster than the average person. I am a READING MACHINE! Beat my score. Go on. I double dare you. This piece has been shared over 70k times on Facebook.

Finally, whilst not strictly being a piece of content that lets people define themselves, I think this piece from the BBC is noteworthy for a related reason – it allows people to put themselves in the content – so rather than defining themselves, they’re able to see how they fit into the bigger picture. This was launched back in 2011 when the world’s population was due to hit 7 billion: 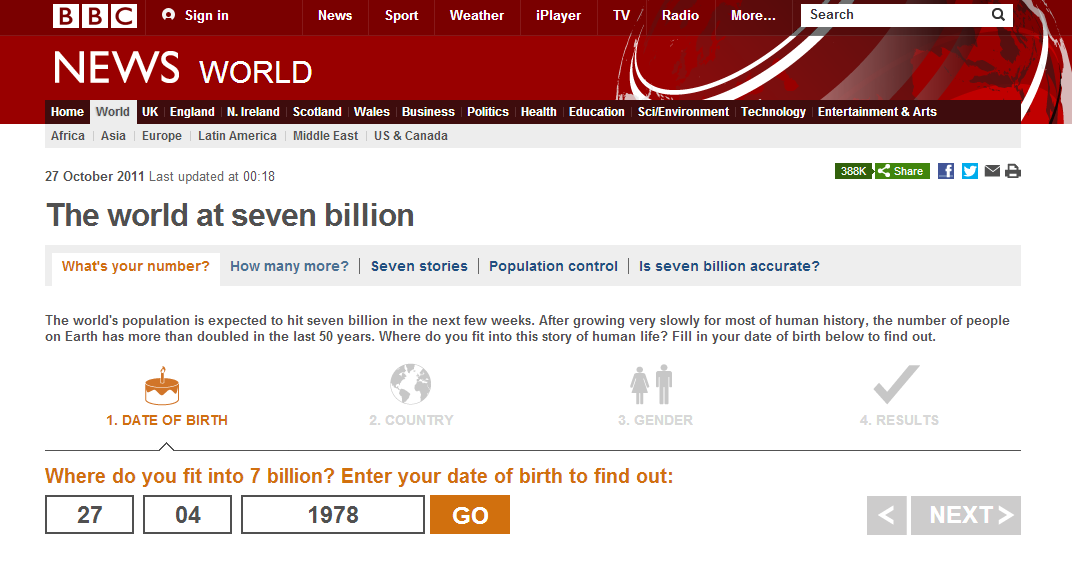 I think this is pretty cool. It’s been shared more than 250k times on Facebook and has received over 80k tweets.

And so dear reader, over to you.  Thoughts? Got more examples of content that lets people define themselves? Let me know via the comments.