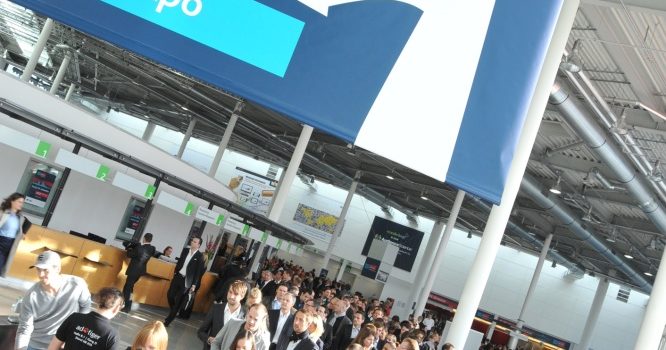 Last week, September 15th and 16th I was visiting just another conference – this time a headed out for the dmexco (which is short for “digital marketing exposition & conference”) in beautiful Cologne, Germany. And I thought I’ll just wrap it up for you because – looking at the event from a (German) online marketing perspective – it surely has its place. But let’s start with the facts.

First of – let’s have a quick look on what the dmexco is all about: “The dmexco is the leading international event for the entire digital value chain. Comprising of a combination between an exposition and a conference, a concept that is unique worldwide, it stands for innovative and futureoriented marketing in the midst of a global growth market. […]”. Woho, sounds tempting, doesn’t it?

According to the organizers the expo hall was sold out with 355 national and international exhibitors with an exhibition space measuring 27,000 m². Around 15,800 branch visitors came to the dmexco and a conference program with over 150 speakers from all over the world. But… that’s what the official version is 😉 OK, now… Let me throw in some thoughts here: I’m attending the conference since forever, basically I started going when it was still called “OMD” and took place in Düsseldorf, but anyways – even just comparing it to the dmexco in 2009 it doesn’t really “feel” that it got any bigger at all – maybe I’m totally wrong but to me it looked pretty “stuck” and more or less the same.

The only significant change I could notice was moving the conference track over to a dedicated location – which really does make sense. On the other hand the rooms were way too small and most of the time you wouldn’t event get a seat. I mean I didn’t try to get in but I heard it couple of times that it was more or less impossible to watch a session at all. It’s maybe not worth mentioning but if you’re a conference organizer and let’s say you want to build up a strong conference track that’s probably one of the worst things you could do: Having not enough space to let people attend to the sessions. That does need some improvement for sure!

Looking at the visitors again I find it fairly interesting that according to the latest press-release there was a share of about 15% non-German visitors, I’d have guessed it to be way lower. And also when looking at the exhibitors on the floor – to me a very, very big number (as I said, my feeling was like a 95%+) of companies are based in Germany. Not that it’s bad thing but to me the “we are a somewhat big international conference” doesn’t seem to be the case. At least not this year!

Ok that’s it for ranting 😉 and please don’t get me wrong: I really like to visit Cologne every year and meet up with friends and colleagues because the one thing the dmexco really is about is networking. This year (like the ones before) started already started on the 14th with an affiliate regulars’ table at the Wolkenburg (which is freaking awesome, just a great place for some really good and long-lasting online marketing discussions). And besides visiting the dmexco for two days, traditionally there’s also the OMclub on the first evening of the conference which – again – just offers a huge amount of networking possibilities! And so just that you know – Germany’s online marketing crowd can party really hard – some impressions can be found over here.

That being said I’m pretty curious to see what’s happening at dmexco in 2011 – the event will be held in September again and I heard some rumors about adding a third day to boost up the session grid again. A little too early to say, but if the organizers are going this direction and in parallel will fix the issues with the sessions they had this year, it might even be worth visiting some of the panels next year.