The 2012 edition of the Dublin Web Summit is Europe’s largest tech event, a two-day extravaganza boasting over 4000 attendees and 200 speakers spread across four different stages.

Of these latter four, I only managed to see Jon’s talk – I could only attend the first of the event’s two days, and I probably didn’t make the most effective use of my limited time. I ended up darting between stages a lot, leaving midway through a talk because I got bored and thought there might be a better talk on somewhere else, and subsequently catching just the tail ends of other talks.

So my review of the event is, by my own admission, based on a brief and inherently flawed experience. Take it as you will.

The Dublin Web Summit is, on an organisational level, a very good event. Aside from the queues at registration on day one (which I avoided entirely, courtesy of a separate media & speakers entrance) the entire process of running an event went without any noticeable hiccups.

There was plenty of coffee & drinks to go around as well as a delicious lunch (all free, except for the one coffee bar where you had to pay with a tweet). The various exhibitors offered plenty of schwag to take home, and the various stages were – with the exception of the tiny and cramped Cloud stage – well set-up and with plenty of seating.

Over the course of the first day I caught a few talks that I thought were excellent: 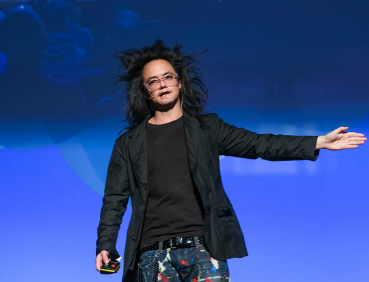 AOL’s digital prophet David Shing – or Shingy as most people tend to call him – was a magnificent presence on the main stage, boasting a transcendentally weird haircut and paint-splattered jeans. Whether he’s a genuine freak genius or just caters to that image I couldn’t say, but I’d tend towards the former.

His talk was about the Next Big Thing, illustrated by a number of statistics that showed what the current trends on the web were and where things were heading. Shingy’s premise was that niche products & services are where the web is increasingly heading towards, from niche content curation to niche apps and niche social networks.

Late in the day on the main stage Baratunde Thurston, formerly of The Onion and now of the Jack and Jill Politics blog and the Cultivated Wit startup, gave a hilarious talk about the convergence of comedy and technology.

I laughed often and loudly during his talk, and while I couldn’t tell you exactly what the point was Baratunde was making, it sure was entertaining. 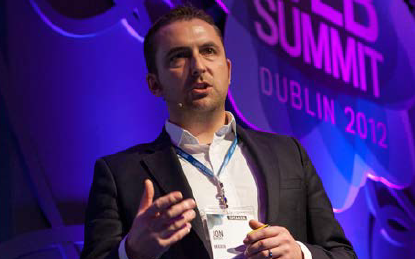 On the digital stage I caught Jon Myers’s talk about the changes in search marketing due to increased adoption of tablets and smartphones. Jon, a regular on the digital marketing speaking circuit and a great friend of State of Search, delivered one of the scarce talks that was light on hype & sales and heavy on facts and data. Just the sort of thing I was hoping to see more of.

Illustrated by a number of fascinating metrics about click behaviour and demographics, Jon showed how mobile is coming to dominate search in ways that businesses genuinely need to come to grips with. At its core it was a ‘go mobile!’ type talk, but the barrage of facts to back up this often-repeated mantra was highly illuminating and conveyed a genuine sense of urgency.

Marin Software published a white paper about the mobile search market which contains many of Jon’s metrics, and can be downloaded here.

On the tiny and poorly lit cloud stage the epically-bearded and bravely-hatted Henry Bar-Levav, CEO of Recursion, gave a talk about the security threats to cloud computing. He listed a number of potential threats and angles of attack that hackers could exploit, and his talk left me feeling very uncomfortable with the security – or, more specifically, the lack thereof – of the stuff I upload to various cloud services online.

The four talks I mentioned above were little gems of excellence in a general sea of mediocrity. Many other talks I witnessed were either blatant startup sales pitches or panel discussions abundant in meaningless waffling about startups.

I can only blame the speakers in part, as their talks were under significant time constraints. On the digital stage each talk had a 15-minute slot, and the main stage featured precious few talks over 30 minutes. I got the impression the Web Summit was trying to mimic the TED talk series, which replaces lengthy in-depth content for slick short narratives.

Short talks aren’t necessarily bad talks, but brevity does lend itself much more readily to mediocrity. Evgeny Morozov has written a brilliant evisceration of the whole TED phenomenon that you really should read – in fact, I wished the Web Summit organisers had read it as well. But it would probably have come too late.

After a visit to the web summit an uninitiated layman could be forgiven for concluding that the entirety of the web consists of hundreds of millions of small startups swarming around (and occasionally being gobbled up by) web giants such as Google, Facebook, Apple, and Microsoft.

Eight out of ten sessions were either about life in a startup, generating startup ideas, venture capitalist startup funding, startup crowdfunding, or selling your startup to a big company for a gazillion bucks.

This is a symptom of a very complicated and pervasive disease that is infecting our discourse about the web, which I’ll probably elaborate on in a separate post at some stage, but which can be summarised as ‘ADD-style worshipping of vacuity at the altar of startup culture’.

I would argue that some of the most interesting web technologies are being developed by established medium and large businesses instead of startups, but you’d never know it based on the output of the Web Summit and similar conferences.

The Web Summit is a very well-organised event that has a lot of potential. If I were to give recommendations to Paddy Cosgrave and his organisers, who did an excellent job on the conference overall, it would be these: broaden your scope beyond startups, feature less speakers on fewer stages, and have them deliver longer in-depth talks.

If they take such advice to heart, the next edition of the Web Summit could truly be the technology conference to attend.

[Featured Image Credit: The Next Web]