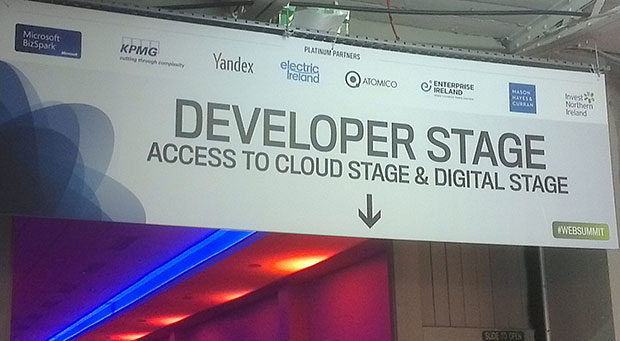 Last week I had the honour of attending the second day of the Dublin Web Summit held at the RDS in Dublin, Ireland. Considering that the Web Summit is really in its infancy being that this is only the third year the event has been running it is already a huge deal – touting 200+ speakers and 3000+ attendees over the two days.

The second day appealed to be because of the developer track they had running, being a code monkey I’m naturally drawn to talks by other coders, and who wouldn’t want the opportunity to hear greats such as Monty Widenius (of MySQL fame), Ilya Segalovich (co-founder of Yandex) and whilst not a developer (but I can’t hold that against him) your very own Bas Van Den Beld.

Before I dig into some of the talks in greater detail, let me sum up my experience as a whole. Unlike a lot of conferences where you leave with a lot of actionable points and very direct inspiration, the Web Summit made me feel generally inspired to be working in the digital industry but left me lacking much new knowledge.

I was also surprised that, considering this was a tech/startup conference, the central theme (if there was indeed a theme) for the second day was that our industry is all about people, and if you can please people both the people you work with and the people you work for then you will be in pretty good shape. This of course isn’t anything new, but I think events like this really drive home the importance of this little nugget of information and occasionally I think we all need reminders of this.

Now, onto my actual critique!

The venue and the planning

The amount of work that has clearly went in to picking an appropriate venue and making sure everything ran smoothly needs to be mentioned, apart from the odd technical hitch (hey, it is a tech conference, of course there had to be the odd technical hitch!) everything ran incredibly smoothly. The fridges were well stocked full of complimentary drinks and snacks, the free coffee was free flowing and not terrible, the free wifi was accessible by all and actually stayed alive for the duration, and live streaming was set up for all the talks available to the internet at large for free.

I’ve attended several conferences in my time, many more expensive than the ticket price of this one, but none have felt as professional and well thought out, so serious kudos need to go to those in charge.

Some of the talks

I don’t want to go into too much detail into any of the talks, but here are some of my personal highlights – as I say I was looking forward to the developer track and spent most of my day there.

One thing I would say about the talks is that many of them felt very rushed, this is simply because there was a massive time constraint placed on the speakers – many only having 15-20 minutes to cover topics that could easily span an hour.

Matt Mickiewicz kicked off the developer track with a talk entitled The War for Tech Talent in which he stated that good engineers will never be unemployed and the main problem posed to them is that of too much choice.

My takeaway from this was focus on becoming a better engineer, make yourself indefensible to your current company and your life will be easier in the long run.

Eamon Leonard was up next with an excellent talk on Corporate Culture, this was the first talk I heard that touched on what I later decided might have been this theme around people I mentioned. After listing all the things that culture isn’t (beer fridges, foosball tables, etc.) he went on to say the company culture is made up of the cloud of people that work there.

He went on to say that whilst it is important for the founder to stamp the kind of culture they want from the outset, every member of staff has a role to play in defining the culture of a company.

My takeaway was that no matter what your role in your company you have a part to play in defining the culture of where you work.

Bas Van Den Beld was next up on my list, he was giving a talk on how we humans want to be able to trust people, and how the people we trust can inform our decisions and learnings in ways we could never imagine. One poignant example was how British schools are taught how much of a success the battle of Dunkirk was for Britain, when objectively it was a German victory.

Interestingly it wasn’t a massive leap to jump from a war involving extreme fascism to Google and how they are showing search results based not only on contextual search and local search, but also on what our friends and peers like and how it is attempting to add some authority to search results by including author information along side the content.

I managed to record a video of his talk, which I have put up on to YouTube.

My takeaway was that we need to consider the social groups of our users and who they take influence from when building a marketing strategy and that social is big and probably only going to get bigger as search engines adopt more and more social algorithms in their thinking.

Chris Poole is the next speaker I want to talk about, I was very excited to catch his talk because I’ve known him to have a very pragmatic approach to how he deals with issues surrounding his most famous creation 4chan.

His talk was essentially a quick run through of the history of 4chan, how he handled each major problem as it arose and had some of the following nuggets of information:

Obviously 4chan has a very unique set of requirements so perhaps this information is not advised on all projects, but I think they serve as excellent rules of thumb.

Ilya Segalovich from Yandex is the last talk I want to cover in this article (honestly, I could write another couple of thousand words on all the talks, but I heard you yawning five minutes ago).

His talk seemed to be around dispelling the myth that the only reason Yandex outperforms Google in Russia is because they are a local company.

In his opinion it is because Yandex is just doing things better than Google, they have attempted to match or beat Google in almost every area (including their own Yandex web browser).

Interestingly when asked how social effects search he responded that “search will always be search” which seems to be a departure from the way Google are doing things.

My take away, and really his conclusion is that competition between companies results in a better experience for users. Don’t be afraid of taking on the big boys.

I just wanted to briefly mention some of the exhibitors that took up display in the main hall of the RDS that either really interested me or I got speaking to.

Geekli.st – is almost like LinkedIn for nerds, you can promote your technical achievements amongst peers that will ‘get it’.

45 Sound – is a way to crowdsource concert footage, something you can easily struggle with on YouTube.

Copygram – is a service for printing and backing up Instagram pictures.

Movember – the men’s cancer charity that asks people to grow moustaches during the month of November.

This isn’t strictly to do this with conference but it is part of the conference experience so I thought it was worth noting. This was one pretty disappointing aspect of the web summit experience for me – bad websites annoy me at the best of times, but bad websites coded by people who should know better really grate on me.

Without wanting to go into a full blown technical rant (if anyone of you like hearing full blown technical rants, hit me up after you read this) the websummit.net site isn’t responsive to the point were it just doesn’t work on mobile devices, sub-pages are entirely hidden because no thought has been put into the fact people might not be using the mouse to navigate the website. The information on the site doesn’t appear to be updated very often, an example is that when I was browsing the website whilst writing this very article I find links to job opportunities that have long since passed and the site is currently promoting the fact the conference is now LIVE (pro-tip, it‘s not).

I enjoyed the day, thought it was well planned, enjoyed seeing the passion in the various startups that attended and would go back next year.