Skip to content
Home » Articles » Business » Eric Schmidt at Google Hearings: Close to Monopoly, but we’ve not Cooked Anything 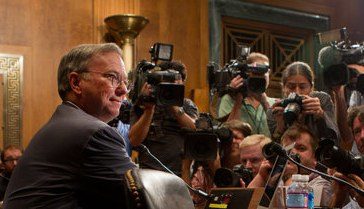 Eric Schmidt at Google Hearings: Close to Monopoly, but we’ve not Cooked Anything

Is Google a monopoly? And is Google deliberately pushing down competitors in their own search results? These are the main questions a US Senate subcommittee is trying to get answered in a special Google hearing this week.

With a market share of over 65 percent in the US and close or even over 90 percent in many European countries and with the enormous amount of acquisitions Google is doing these days this is not such a strange question to be asking. The hearing was triggered by complaints from Google competitors like Yelp.

One of the people being heard is Eric Schmidt. Now we all know he likes to throw around some quotes we all find either amusing or interesting. And at the hearing we were not disappointed. Schmidt claimed that Google had learned from mistakes that Microsoft made in the past, he also almost said that Google indeed was a monopoly (isn’t that like close to a confession?) but did not “cook anything” and while he was at it he kind of explained how Google tests algorithm changes.

Is Google a Monopoly?

One of the main questions is whether or not Google is a monopoly. Schmidt off course tried to deny this. But when asked by senator Herb Kohl:

“But you do recognize that in the words that are used and antitrust kind of oversight, your market share constitutes monopoly, dominant — special power dominant for a monopoly firm. You recognize you’re in that area?”

Schmidt acknowledged that Google was getting close:

“I would agree, sir, that we’re in that area….I’m not a lawyer, but my understanding of monopoly findings is this is a judicial process.”

Which makes sense, because simply looking at market share shows that Google is dominant to say the least.

An interesting part of the hearing was when Schmidt talked about how Google tests its algorithmic changes. He told the committee how rigorous the testing process is. The subcommittee released a document (PDF here), which has a specific section about this testing. Be sure to also read Matt McGee’s post on Searchengineland about this.

The number of changes Google makes were also revealed: 516 changes in 2010.

A very uplifting moment came when Republican senator Mike Lee claimed he had done some tests and claimed he found out that Google was manipulating the results saying they “cooked” the results. Schimdt jumped directly on that stating:

“I can assure you we have not cooked anything”

A lot has been written about the hearings so far. To get a total view of what went on I would suggest you read some of the articles listed below. What we can assure you is that Google is far from done here, they will face some heat in the near future.

Video of the hearing

You can watch the video of the hearing below