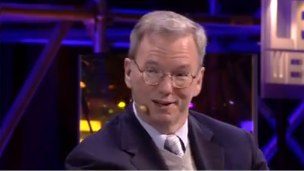 Eric Schmidt Confirms: The Social Signal is a Ranking Factor

Eric Schmidt can always be woken up to make a remark which might just go around the world. So when he took the stage at LeWeb 2011 last week our ears were wide open. And we were not disappointed.

Next to a lot of ‘commercial’ talk from Schmidt there were a few lines which drew the attention. For example he stated:

“The social signal, the people you ‘hang with’ is actually a ranking signal”.

The remark was made in a segment of only a few minutes about Google+, the first video below highlights the specific segment:

So with this remark he confirmed that it now matters for your rankings who you connect with. Results are not just based on content or links anymore, social signals are right up there with all the other ranking signals.

Schmidt not only confirmed this, he also explained that the people you have in your circles are a factor, especially when it comes to YouTube:

“Google benefits of having social information of you and your friends. The organization of your circles for example can help Google to make a better selection of YouTube videos for you.”

LeMeur asked Schmidt about Facebook, do they want to beat them? Schmidt urged to say that he believes Facebook has done a great job and that it would be useful for anyone to have competition, but even though you could ‘feel’ they do want to beat them, he didn’t say that out loud. In stead he focused on the area in which Google and Facebook compete (Google wants not to compete directly, but in an area where Facebook still has some catching up to do), he focussed again on the data:

“It is not just a question of competing with Facebook. The information allows Google to be better and that is our objective.”

Below you can find the entire interview. In the first part of that interview Eric Schmidt calls Hugo Barra to the stage who demonstrated the Ice Cream Sandwich (Android 4.0) platform, with the face recognition feature we highlighted earlier today.