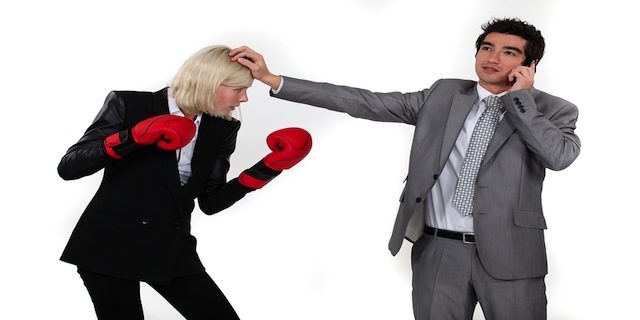 There is no doubt that the technology sector is more than averagely sexist. The reasons for this are multitude and too complex to explore in this blog post, but suffice to say that the technology sector – and the digital marketing sector, as a subset of the tech industry – is infused with a laddish attitude and enjoys pervasive and embedded sexism.

I find this rather unpalatable. I think the tech industry needs more women, and more participation from women. We shouldn’t abide by companies and conferences using objectified women as enticements and attention grabbers. We’re not stone age cavemen any more.

If you attend tech conferences – and I include digital marketing events among these – there are a few things you can do to help encourage the industry to become more female-friendly, which in turn will encourage more women to join the tech industry and enable the entire industry as a whole to grow and mature.

If you see booth babes used at a tech conference, your best decision is to avoid that booth altogether. A second tactic is to leave feedback to the company utilising booth babes, telling them that their product looked interesting but their use of booth babes made you decide against considering their offering.

Some conferences use booth babes – or even Playboy playmates – as enticements, and whenever you see such a prehistoric mentality on display you should strenuously avoid the conference and let the organisers know their backwards approach to marketing ensures you will never participate in their event.

Insist on a Balanced Speakers Roster

Too often a conference’s speakers roster is dominated by men. While in some industries this is due to a lack of participation by women – though such niche industries are increasingly rare – in digital marketing we have no shortage of women doing great work. (One look at the State of Search bloggers panel will tell you that.) So there is quite literally no reason why a digital conference’s speaker’s roster should be primarily made up of men.

When you see a digital marketing conference agenda dominated by male speakers, you should question why. Ask the organisers about this, but don’t expect a meaningful reply, as most will answer vaguely (if at all) and dodge the issue entirely. The mere act of asking will hopefully serve to highlight the issue with the organisers, and perhaps make their speaker selection process a bit more gender neutral.

Don’t be a Dick

If you’re a man and attend tech conferences, make sure you don’t act like a dick. Women don’t attend conferences to pick up guys. They’re there to learn and network and exchange war stories, just like you.

Women’s participation in after-hours social events should also not be remotely construed as an invitation to flirt. No matter how drunk you get – and I imagine some of you will get very, very drunk – do your best to behave like a civilised gentleman.

An abundance of dickhead men trying to hit on women at tech conferences is sure to dissuade many women from attending future events. And that makes the event – and as a result the industry as a whole – poorer for it.

As long as there are small-minded men in tech we’ll have sexism in tech, but at the very least we should ensure such behaviour is openly discouraged and frowned upon. You can do your bit to improve the industry’s attitude to women. Doing nothing is not an option – it takes good people to act to make positive change happen.