Finally Google+ Has Search (and more)

When Google last week opened up its API’s I predicted that pretty soon we would also be seeing a search within Google+. Something which has strangely been missing from the start. If it wasn’t going to be Google itself, with the API surely a developer would come up with the search functionality pretty soon, after all we saw the same happening with the share functionality on Google Plus.

But this time Google didn’t let the developers beat them. The search box on top of Google Plus, which used to only search for people now searches through Google+.

Google has made a real ‘universal’ search experience out of it. People come first followed by the other content. By default it is set to the “Best of” results, which means they are the most relevant results for your search, but you can also filter into channels yourself: everything, people, Google+ Posts and Sparks. 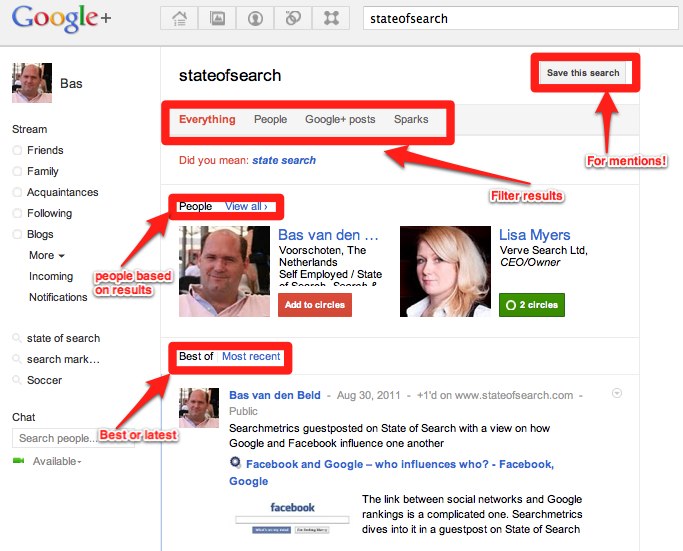 One thing which is also very interesting is the fact that you can also save a search. It might seem as a simple feature, but this is exactly what makes other social networks like Twitter interesting. The ability to keep track of certain topics (or mentions!). With this functionality you can finally keep track of what people are saying about your brand for example.

Google has made a few other changes to Google+ this past week, which are mostly related to mobile devices:

Hang outs has become more interesting for those wanting to use it as sort of a meeting tool. You can now do screen-sharing, name a hangout, use Sketchpad and Google Docs within Hang outs.

More importantly however: you can now use hang outs from your mobile device. If you have the right phone, with cameras, software etc, you can use your front camera to join a hang out. For now that is only available in Android 2.3, but it will be on the iPhone and other phones really soon.

Google has improved the mobile app in general. You can get SMS text-message notifications, do photo-sharing on the IM-service and they changed the name “Huddle” to “Messenger”.

With the open API we will be seeing many changes in the near future, but the most important one Google finally launched: search. What kept you so long Google?