Get your comments, by Facebook: Social Network preparing commenting system

Facebook has big plans. The Social Network is slowly but surely moving away from ‘just’ being a Social Network into becoming a controller of the web. It looks remarkably like the path Google has taken: each time make more services which are available outside of your territory.

Now Cnet reports that Facebook is planning to launch a new service which will not be running on the Social Network itself, but as a third party service. In a few weeks it is said that Facebook will be launching a third-party commenting system. This system would allow blogs to be using Facebook’s commenting system on their website.

This would mean that it is yet another part of the website which bloggers will be ‘giving away’ to Social Networks. The commenting will be all done within Faecbook. This also means the actual data of the commenting is not in the hands of the blog owner anymore, but in the hands of Facebook.

There are some interesting benefits to using Facebook as your commenting system. For example it looks like comments will appear on people’s walls and even fan pages might be promoting your content. Your content, or at least your comments, will be ‘carried’ through the Social Network, reaching a possibly higher amount of potential readers. After all, if a friend of you has commented on a blog post, you are more tempted to read it.

There are also a few ‘buts’ to it off course. How will Facebook treat your comments? Will there be ads? Will they be used as ads? And how will Facebook work with permissions to login using either Twitter of Google?

Facebook at first seems to be aiming for the large Media Sites and is in talk with a few of them. One site which already has Facebook managing their comments is People.com. 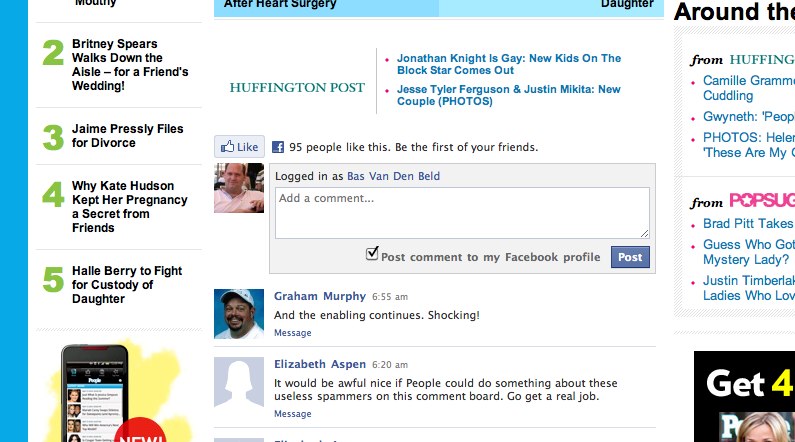 Hannah Butcher
Editor, content gatekeeper; whatever you call yourself, being in charge of a company blog can be a tough job. You’re...
Read More
Join our 9,000+ Subscribers
Receive daily, weekly or monthly updates on our latest content