As anyone that’s spoken at a conference before will know, the preparation that goes into creating your presentation can be very time consuming. Therefore you want to make sure you’re maximising the opportunity and getting as much benefit as much as possible. So here’s my tips for making sure you’re getting the most out of the energy you put into your presentation, not all may work for everyone but hopefully some will.

Make sure you start promoting the fact that you’re speaking early across all your relevant social channels. If you use tools like Tweetdeck or Buffer you can schedule all your posts at once so that you don’t even have to think about it again.

Also think about how you promote it on social, obviously posts that include imagery are much more attention-grabbing and tend to perform better so consider including an image in your promotion. Moz do a great job of promoting all of their events using a simple image template, why not do this when you’re speaking too:

Get your whole agency/company involved in promotion

If you work agency-side then it’s a no-brainer that your agency will want to promote your talk form its social channels and in other communications, but make sure you get the rest of the people that work at the agency (or company) that you work for sharing the fact that you’re speaking to. This can massively increase the reach of your talk.

Again if you’re agency side, speaking at a conference can be the perfect opportunity to improve relationships with current clients and start new ones with prospects. What better way to build their trust in you than demonstrating that you’re regarded as expert enough to be speaking on the subject? Even if they can’t attend at least you’ve reaffirmed in their mind that you are a thought leader in your industry.

Make sure you do your research into what opportunities there are for networking, most events will have a pre or post party (my favourite are the ones that have both of course). If there isn’t an official one the best way to find out where people will be is to get involved in the conversation on Twitter, nine times out of ten you’ll find someone tweeting which pub everyone is gathering in. 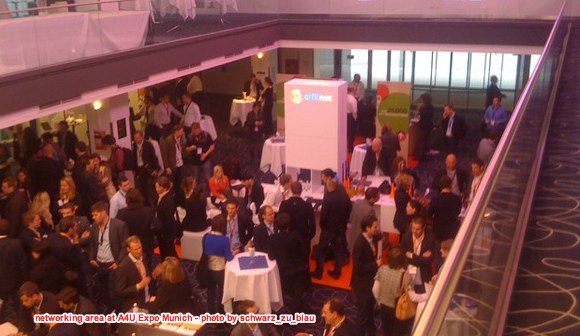 Give yourself time to stick around

Make sure you allow yourself plenty of time after your talk to stay at the event so that anyone who has questions and generally wants to discuss your talk further has the opportunity to. If you rush off you may well miss out on lead opportunities or just meeting more interesting people.

If you want your talk to spread further than just the people in the room then Twitter is certainly your biggest friend. Make it easy for people to tweet your sound-bites by including your Twitter handle and the event hashtag on all of your slides. There’s nothing worse than wanting to tweet what someone has said but not being able to find them on Twitter then when you finally do forgetting what they’d said in the first place.

If you really want to make sure your talk’s getting attention on Twitter then why not get a colleague to come along to the talk and either prep them with the key sound-bites beforehand or ask them to pick their own while you’re talking. Make sure this is being amplified by your agency/company’s social accounts as well.

Upload slides during conference to capitalise on buzz

If you’re able to, then make sure you upload you slides to Slideshare and share them during the conference to capitalise on people that will be viewing the hashtag. This all means you’re likely to get included in the many round-up posts that are often published meaning even more exposure to people who weren’t at the event.

Depending on the content of the presentation you might also be able to turn it into a more long-form piece of content or event just a blog post. This again just allows more reach from the content that you’ve spent time carefully creating.

All of the above has been focussed more around driving people external to your business to your content, but it’s important not to forget about people internally as well. Why not set some time aside (dependant on the length of your talk) and invite anyone internally that’s also interested or could benefit and present it to them as well. You could choose to do this before the event instead as a rehearsal for yourself as well and to prep yourself for any questions they think might be asked afterwards.

Latest Post from Laura
Events How to pitch what journalists want