Skip to content
Home » Articles » Uncategorized » Google +1: the pieces of the social puzzle are coming together

Google +1: the pieces of the social puzzle are coming together

With the official launch of “+1” yesterday Google took yet another step towards getting all the pieces of their social puzzle together. After failures with social experiments like Orkut and Buzz Google now has decided it will be adding social features to their search results, so called ‘social layers‘, which eventually will turn out to be Google’s new approach to social.

The +1 button they launched yesterday doesn’t seem to be that new. After all, we have all seen the “stars” in search wiki and the mentions of social sharing on sites like Twitter. But the +1 button does do a little bit more than just that. It is sharing to your own network and it is connected to your Google Profile which seems the be the center of attention when it comes to Google’s social efforts. I’d like to look at some obvious questions with maybe some not so obvious answers.

There are many posts on the web describing what it exactly is. The best one probably can be found on Searchengineland where Danny Sullivan has once again made an extensive overview of the new feature. So I’m not going to repeat that here. But you can watch the video which Google released about it below and on top of that I’d like to talk about what it is not.

The feature which allows you to vote up a result in the SERPS and in the near future will allow you to do the same on websites has on many places been compared to the Facebook like buttons. Which off course is not strange because the basis of the button is the same: vote for a page and make that page more popular.

It is a mistake however to think its exactly the same. The biggest difference for starters is that it will be showing up in your search results. Where Facebook relies on your stream or on the fact that you are already on the specific page one of Google’s aims is to give you more information about the search you are doing. It is triggered based on the search you are performing, it is what you are looking for at that specific moment of time. You will recognize somebody within your social circle and will be more tempted to click on the result.

Facebook does have a similar widget for on the pages itself (“shared by”) but than you’ve already reached the page. The fact that this shows up in SERPS will increase the click through rate, especially those of the ads.

Does this impact rankings?

So is the next step search marketers should be taking to get everybody to vote on their links? No, don’t, please. It’s not another popularity contest. We may like the fact that many “+1-ed” it, it will not directly influence the rankings of your site. Matt Cutts told Searchengineland: “we’ll look at it as a potential signal to improve search quality as well.” A potential signal. It does not affect rankings now.

And yet it does…

As far as Google reports this feature does not change how the algorithm works in general. So a website with more “+1-s” will not rank higher. Except for when it comes to personal search maybe. Because people within your social network liked the result chances are it might be on a higher position for you personally. But as soon as a searcher comes outside that social circle there will be no influence anymore. The trick therefore will be to get influentials to like a page.

What about the data?

Data is one of the main reasons Google is doing this. In their official blogpost Google says:

“Our goal at Google is to get you the most relevant results as quickly as possible. But relevance is about relationships as well as words on webpages.”

They are trying to find the relevance. Making the results as fitting as possible. And that is what they are trying to do here. The fact that somebody you know might like a page will make it more (or less in some cases) relevant for you. With the enormous amount of data they will be gathering they will be able to make your results even more personal than they already were.

“We will record information about your +1 activity in order to provide you and other users with a better experience on Google services.” 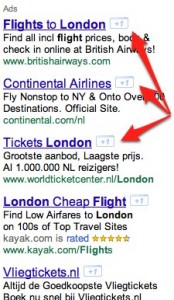 Yes, off course this is also about money. By putting the “+1” also in the ads, the ads will become much more relevant. That will increase the value off the ads, for the advertiser and for Google. On top of that Google will have more data (yes data again) to share with advertisers. One sentence in the privacy policy says it all:

“We may share aggregate statistics related to users’ +1 activity with the public, our users, and partners, such as publishers, advertisers, or connected sites. For example, we may tell a publisher that “10% of the people who +1’d this page are in Tacoma, Washington.””

The ultimate question off course which has no right or wrong answer. We’ll have to wait and see. There are many who already have written it off, it won’t work because its either too much like Facebook or too much like Buzz or nobody will use it because it’s within the SERPS.

I think that if the combination is right it might just work. But hugely important for that is how it will be implemented on websites. If that is picked up well it can be successful. Plus, you have to look at the bigger picture. Combine it with all the social layers they have already implemented and will still implement in the future.

So what’s the next step? Are we actually going to see a Google Social Network? Well in fact that is already there. They are building that social network step by step without many noticing it. When it’s done you’ll be so used to the social elements within Google it will feel as if its always been there.

The key thing to keep an eye on are the Google Profiles. That is where it all comes together.

We’ll be posting some expert opinions on this later today. In the meanwhile I’d love to hear your opinion about it!

Oh one more thing: I’ve heard people say this is Google’s April fools’ joke. It’s not. Not only is it launched at March 30, it is part of a pattern. Plus remember Gmail? That was launched on April 1st…