Skip to content
Home » Articles » Search Engine Optimisation » Why Google celebrates its 18th birthday, not on its birthday 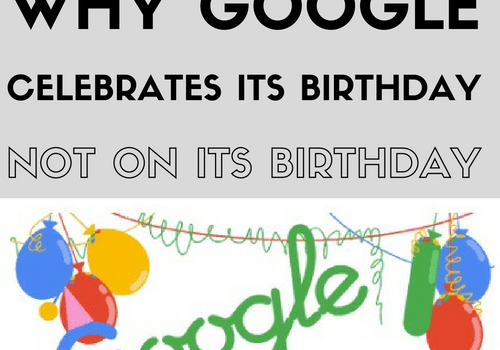 Why Google celebrates its 18th birthday, not on its birthday

If you go to Google’s homepage today you will see a small celebration happening. It’s Google celebrating their own birthday. Every year since 2002 they celebrate it with a doodle:

Today marks the day that Google turns 18. In some countries, that means you’re an adult. There is some confusion about the date, though. Doesn’t Google know its own birthday? That doesn’t sound like an adult.

In sports, with some athletes, their birthdate are a reason for discussion. Some are older than they appear to be. With Google it’s not about years, it’s about days. Because when is Google’s birthday really? On the 27th? Or was it the fourth? Or was it an entirely different day?

You would say Google knows its own birthday. So we could ‘assume’ that the 27th is the right day. But why did Google then celebrate their birthday on the 26th in 2005? It only started celebrating on the 27th the year after. To make it even stranger, in 2004 Google was 20 days earlier on September 7. Which was a day later than when they celebrated a year earlier on September 6…

What is the right date?

Well actually, the right date is September 4th… at least, that’s the day Google filed for incorporation in California (according to their own history timeline). Most businesses will see that as the ‘birth date’.

It’s a bit of a mystery, not many sites actually seem to have the answer. Back in 2007, Danny Sullivan tried to answer the question but only got to “Google’s birthday is whenever it wants to be”. And today many sites are wondering about it again.

The real answer seems to be in Marketing and PR.

In 2005 Google wanted to announce something big. A nice “PR trick” or “marketing trick” is to make things come together. So they decided to “attach” their birthday to a big announcement. That of the new index.

And not just any index. In a blog post on the Google blog, Software Engineer Anna Patterson announced:

“For our seventh birthday, we are giving you a newly expanded web search index that is 1,000 times the size of our original index.”

Back then it was a big thing, though. And since they wanted to announce the increase in the size of the index, they needed a ‘reason’ so they picked the birthday.

So we should say today: