Skip to content
Home » Articles » Business » A Google board meeting got videotaped! (In 1999…) 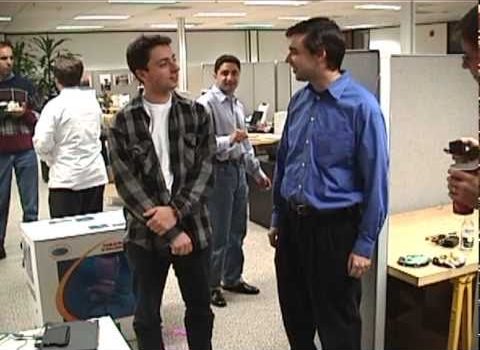 It’s rare that you actually get to see what is going on within the Google Plex. In some cases you get a peek of what happens after working hours (are there “after” hours at Google anyway?). It is even more rare that you can actually look into a Google Board Meeting.

Yet somebody decided to bring a camera to a regular board meeting which shows some announcements of new employees and the celebration of some birthdays, amongst which Larry Page’s. The video has been posted on YouTube. But before you get too excited: it is a video of 1999, when Google was still a relatively small company, way before Eric Schmidt had even heard of the company.

It is a very nice video to watch even though not much is happening, but the way Larry and Sergey move between their co-workers, the presence of dogs and baby’s (amongst which Susan Wojcicki’s) and the playful mood and the present which Sergey gives to Larry for his birthday show the original culture of the company.

Found through Searchengineland, from the Xooglers blog.