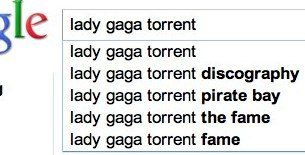 It’s a fine line between freedom on the web and piracy when it comes to torrents. The little files help exchange movies, music, software and much more. Sometimes it is a bit shady whether or not this is right or wrong, sometimes its obvious.

Google announced several weeks ago it would be actively filtering results which are ‘piracy related’ when it comes to Autocomplete and Instant. They have now started doing that. If you start typing “Torrent” for example, until the last letter it shows a blank page and no suggestions.

The search results don’t seem to be affected at first, but if you look closer you’ll see that Google did remove some results based on copyright claims. Below the search for a “lady gaga torrent” it says:

In the torrent industry not everybody is happy about this. RapidShare told Torrentfreak:

“We knew about Google’s plans for quite a few weeks now. We embrace that certain search suggestions will not put a wrong complexion on RapidShare anymore, but we are concerned that at the same time the legitimate interests of our users will also be affected. We believe it was the wrong decision to remove the term ‘RapidShare’ from the search suggestions”

The move supposedly comes from the pressure Google is feeling from copyright activists and entertainment industries including the MPAA and RIAA.

More on this on Torrentfreak