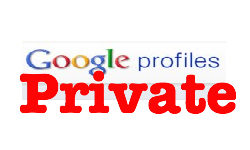 Something is up with Google and profiles. Maybe the rumors which are going around at SXSW about Google newest social efforts, supposedly called Google Circles, might have some ground after all.

Last week I reported about the new Google Profiles lay out. Google really seems to be moving with the Profiles because The Next Web noticed that on the Profiles Help Page it says “All private profiles will be deleted after July 31, 2011.“. What is Google up to?

Google doesn’t want private profiles anymore, which might indicate that they have a plan with the public ones. What is suggested is that Google is not rolling out anther Facebook clone, but a service which will connect friends and search.

This can already be seen by the “social share” functionalities Google already launched. The so called “results from your social circle” are based on who is connected to you. The Google Profiles might be very important in this matter. If a profile is set on ‘private’ they can’t connect it, so it will be useless for Google.

It looks like a simple thing, but this could really mean Google is ‘up to something’. I still don’t think Google will be releasing a ‘social service’, which was suggested before. I think they will be releasing social elements which will be integrated with existing features. The Profile connection could be part of that.