Skip to content
Home » Articles » Uncategorized » Google Disavow Tool, For Everyone Who Did Something Wrong 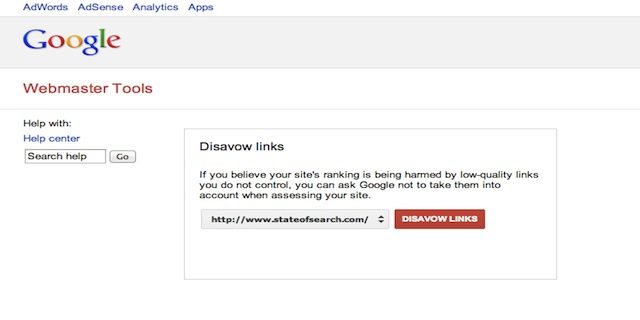 Google Disavow Tool, For Everyone Who Did Something Wrong

“Finally” and “About time” were amongst the remarks of many reactions yesterday when Google officially announced their “disavow links” tool at Pubcon. The tool is a way to let as a site owner Google know which links pointing at your site you think should be ignored by Google.

The tool was already expected by many SEOs because Google had been testing it out amongst several SEOs in the past few weeks and Bing already launched its own tool back in June. The tool can be seen as a direct response to Penguin updates: sites with a lot of bad links need to clean up their act. With this tool Google makes that a bit easier. But not just for the site owners, for themselves as well.

As said the tool is really meant to clean up bad links pointing at your website. The best way to do that until now was to figure out which links are potentially bad and trying to get them removed at the source. To be clear: that still is the best way to ‘clean up’ even though it takes up the most time and you are not sure whether or not you can get links removed.

The tool Google launched yesterday can help site owners do more in ‘bulk’. When you received messages in Google Webmaster Tools notifying you of a manual spam action based on “unnatural links” pointing to your site you can use this tool to tell Google which links you think are the ones which should be taken out of consideration.

Important to know here is that it is NOT a tool which allows you to ‘delete’ these links. You are telling Google which ones should, in your eyes, not be counted, Google will then take a look at them and might agree with you or not.

The tool works pretty simple (makes you wonder why it took them so long to launch, it is not a technical issue, that is sure). Once you got the messages in GWT as a ‘nice’ website owner you will try and get rid of the bad links. The once you cannot get rid off you can inform Google about.

You go to the Disavow page and upload a (text)file with the links in it you believe should be disavowed. 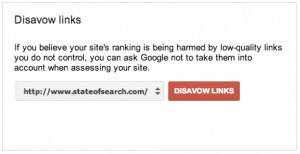 Google is clear about the format:

The format is straightforward. All you need is a plain text file with one URL per line. An excerpt of a valid file might look like the following:

After that it is time to wait for Google. And that wait can take a while. It is like sending a postcard to the other end of the world and not knowing when you will get an answer, let alone what the answer actually is. Cutts said it could take weeks before Google responds. And if you decide somewhere in the middle of that waiting time to adjust your file, the waiting will start from scratch again.

To fully explain the tool Matt Cutts created a 10 minute video which you can find below.

For whom is this tool intended?

Google specifically lets know that this tool is meant for those with issues, site owners which have received notifications in GWT about bad links. If you didn’t have those messages I’d suggest you leave the tool alone for now.

Cutts even points out in the video that it is mainly for the bigger sites. Smaller sites will be able to ignore this tool in general.

The launch of this tool will help SEOs but it will even more help Google in their fight against spam. Off course, Google will know from most of the links whether or not these are bad links and even if they are indeed bought or not. But the data (yes, again it is about data as well) which Google will receive from this tool will be priceless. SEOs will be telling Google what bad links are, which one they (potentially) bought.

Google will happily embrace that data.