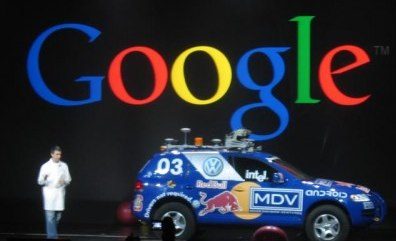 This is a guestpost by Brandon Moreau – Webmaster for Citiguarda Sydney Security Company, and DelMonico Hatter, seller of Borsalino hats for over 100 Years. Opinions expressed in the article are those of the guest author and not necessarily State of Search. This article is the second of a series dealing with privacy, technology, and where we are all headed. Read part one here.

Brandon is simultaneously a Technophile and Techno-skeptic. He is an avid reader of Stateofsearch.com and is grateful to Bas for the opportunity to guest post on this topic.

Down the Rabbit Hole

Well ok, where do we go from here? What’s the true future of Search? (At least, my best guess?)

It’s fascinating to me, I’ve heard Eric Schmidt reference this more than once: “If you have a billion people using a platform, someone will find a way to monetize it.”

Eric has also said that “we don’t make devices.” Actually, he’s right – Google is fundamentally in the Advertising industry, though they may appear to be in the Hardware and Software Industry. This is because they also have the unique position of being big enough to create the advertising space playground which they (and others) are then permitted to play in and make money from.

Example – Google capitalizes on the mindblowing popularity of Android by getting 100% of the mobile AdWords revenue from phone users of that OS. By contrast, AdWords revenue generated by Apple iOS users are split 50/50 with Apple.

Since the reach of Google is so huge, and it’s hard to see all of it at once, I think that Google’s true industry is a fact that your average user might not totally grasp, and it’s probably a reason why Newspapers (which are are first and foremost an advertising medium) are so worried.

Apple is in a different business than Google – they are in the Device Manufacturing market. When Schmidt says that they “don’t view Apple as a competitor,” in large part it’s not just PR like I first thought. In a really fundamental way, they actually are not.

As evidenced by the free offering of Android to mobile providers, Google creates the Open Platforms, or rather, “spaces which can attract attention,” then monetizes them once it has the attention of many. By comparison, Apple creates products, and then onsells them. Apple also creates a space for others to “play” in. But being a device manufacturer they are mostly creating a space for software. 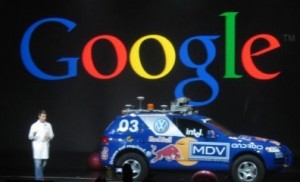 Ostensibly Google is developing Robotic Cars as a way of keeping people safer on the roads, since according to Eric Schmidt, “Humans shouldn’t drive cars.” Some people are certainly brushing this off as just another “odd” Google investment. I know I did. Though it is true that people certainly are in a lot of accidents, and that there is a good chance that a robot driver will eventually become an important safety feature.

But wait a minute, it’s not as far away from their traditional business model as everyone thinks – Google is “not a device manufacturer,” remember? They’re an advertiser. Let’s think for a second how Google will plan to monetize robotic cars by considering their existing overarching business model: Mobile First.

An LCD dashboard hooked up to a robot driver and a networked GPS is most certainly a location-sensing computer. It is a mobile device, isn’t it? And Eric has specifically made references to cars being included in internet capable devices (along the line of IBM’s “Internet of Things“).

First Google successfully monetized Search. Then they monetized Mobile. Soon they will be monetizing Local using a combination of the three.

The Future: What if they are trying to monetize drivers?

Once this Robotic Car technology really gets working well, If a driver doesn’t have to pay attention to the road as much (something which could be problematic in itself), do you think that he/she can pay more attention to suggested advertisements? And how many drivers are there on the road in technologically capable countries? How many hours do those people spend driving? That’s an untapped market if I ever saw one in the history of advertising. It just needs to be created.

It’s not only mobile phones that Google is looking at with their “Serendipity Engine” – I believe that a car’s on-board computer will conduct automated searches for drivers as they are on the way to games, concerts, restaurants, work, and play, just like their mobile phone will be doing in the near future.

First there came Newspapers, then Radio, then TV, then Internet. Then what? Eventually, Robotic Cars is what. Eric says the best way to increase income is to develop entirely new streams of income. I’m making the prediction that this is one of their major future profit streams, ten plus years down the line.

But in Google’s eyes, that’s just an extension of the concept of mobile devices, which, no joke, could eventually be everything from your car to your newspaper to your keychain to your coffee mug.

So, What Does This All Mean?

Don’t get me wrong – Google has done some incredible things for people. I’m still at heart an admitted Google fan and in fact have asked for “Google Swag” as gifts at the top of my list. The advances in medical, communication, information, and “augmented” living will be certainly things that people can use. But I am mostly afraid that humanity will become so used to “computers serving us” (again, Eric) that we will eventually lessen, and then lose, the ability to care for ourselves.

Think how you might feel if you and all the friends you know suddenly lost all connection to the internet, anywhere, for an indefinite length of time.

Last I checked, the best computer around was still the Human Mind. I might be voting in the minority on that… but I’m really just appealing for some temperance and judgment in the rollout and development of new technology.

Instead of using technology to make people “better” by handling our “inherent flaws,” why not concentrate on ways for people to truly improve themselves, just as we are, so we can better handle our life and environment, with or without technology?

You don’t need to be Aldous Huxley to grasp that concept… And that’s what’s gotten me feeling queasy.

In the future, Cars will be just another way to reach users, and by making them robotic you open up a whole new space for people to be streamed suggested advertisements based on their location and activity. Good or bad, that will likely be the way it is.

“With your permission, of course.”

Not mine… but that’s me.

I’m curious – would they have yours?

And do you think this is really the monetization model that Google will use? Has anyone else been thinking about this?