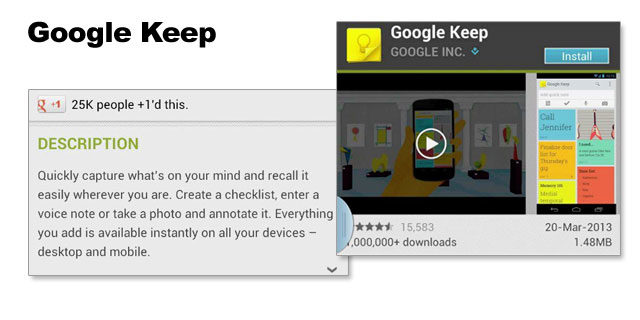 Google Keep is a new app/tool from Google that appears to be reviving the old Google Notebook, but the ‘buzz‘ appears to be regarding whether Google is taking on ‘Evernote’ and Microsoft ‘One Note’ and whether it has succeeded.

I personally favour the trusty ‘spreadsheet of doom’ combined with calendar reminders for deadlines and work based tasks. However, as a fan of traditional lists, mind maps and calendars to manage things, I thought I would have a look at the (not) much talked about Google Keep and see just how handy it may be as a tool.

I also downloaded the free version of Evernote so I could compare some of the features. This post is not intended as a direct Evernote vs Google Keep post as it is clear that at the moment Evernote is the more powerful tool due to additional note capability and share features. However, similarities suggest that this is a step towards Google moving in on the Productivity Tools space.

What is Google Keep? An Overview

Google Keep is essentially a scrap-booking sticky note app designed to help you store snippets of information on your Android device (sorry iPhone users – not available for you yet!).

It is Free to use and the application synchs with your Google Drive, which actually can be pretty handy depending on the types of notes you need to take.

As with Evernote, you can take audio notes, standard text notes and picture notes, but as yet, you can’t attach documents/videos or share to Twitter and Facebook.

The Google Keep interface and home screen is clean, easy to use and very easy to follow.

There are several different styles of notes that you can take within Google Keep: 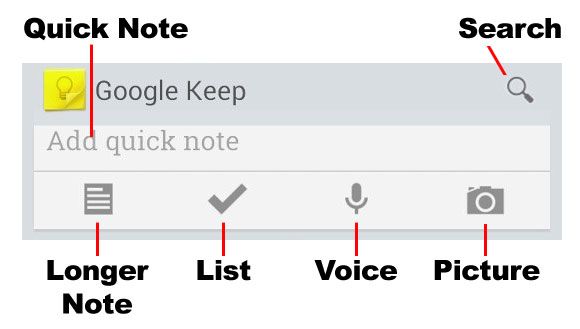 For general note taking and longer notes – if you type a lot of information into the quick note, it appears to turn in to a longer note – there does not appear to be a character limit either. Granted I got bored of pasting text to find out, but it is fair to say that you can write quite a lot in your notes.

You can also select all text, cut, paste and add to clipboard. You don’t seem to be able to paste from another app such as your internet browser so that was a little annoying. Especially as I wanted to make a chocolate layer cake and was feeling too lazy to cut and paste the URL to myself by email or re-type the ingredients 🙂 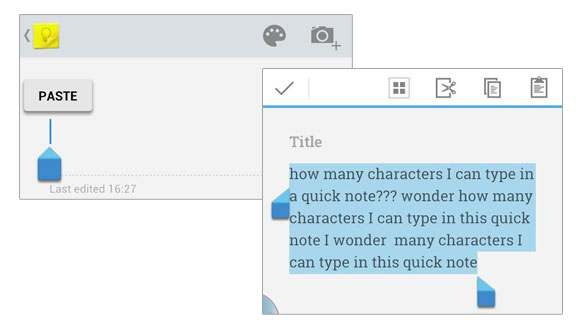 If you are a fan of the list, you can write as many ‘to do’s’, shopping lists, set lists as you like If you hate typing on the move on a mobile device like I do, a quick voice message to yourself can save you a lot of hassle. Google Keep also transcribes your speak to text, but my dictation is obviously rubbish as ‘remember to speak to Bas about that training thing’ turned into this: 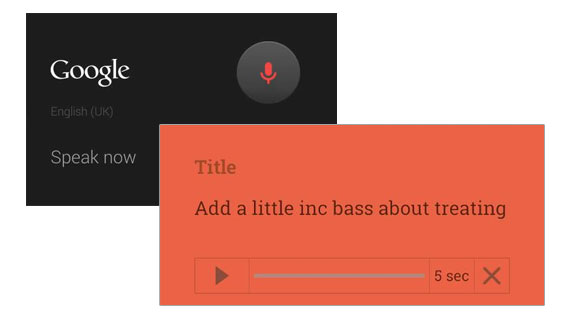 As expected, this opens the camera app. However, it is not currently possible to choose an already taken picture or take a screen shot (or a website for example, should you want to re-produce an error or take a screen for reference). 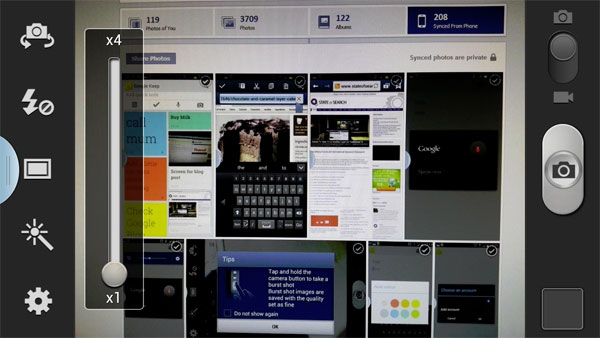 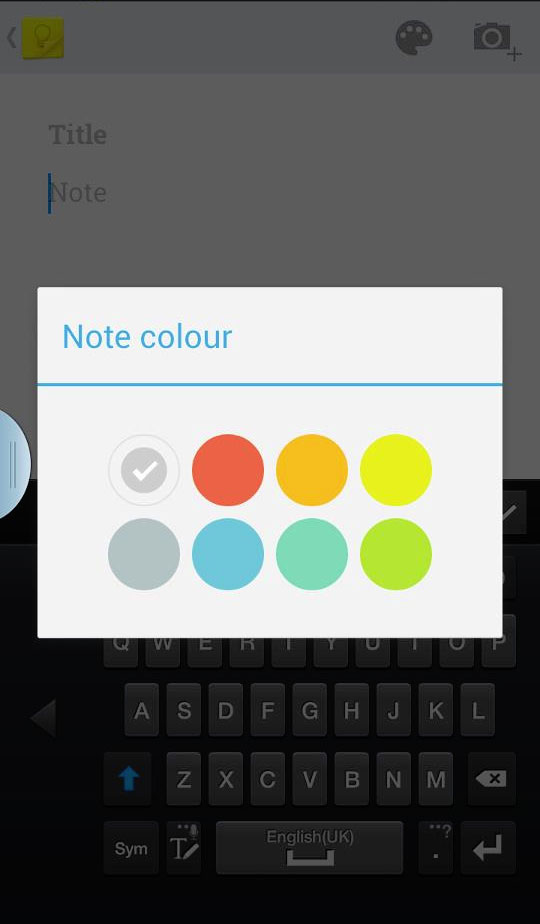 Other features include the ability to:

Features that are missing:

Having used the two to compare for this blog post, I actually found Google Keep not as slick as Evernote with regards to interface ‘look and feel’, but it is a lot cleaner, simpler, and smoother as we would expect from a Google Product.

The fact that it seems to have had a ‘soft launch’ (not many people I spoke to today noticed the announcement last week) suggests that this may just be a test to see if it is worth developing further based on uptake as opposed to a full on assault on Evernote territory.

However, given that there are significant similarities to other note taking packages that are available, the fact that Google Keep synchs directly with Google Drive, and that today the Android Marketplace had 25k G+likes /1 million+ downloads /16k reviews – I can’t see it being very long before full Evernote-style functionality is added and seemingly missing features are added due to demand.

I am not in the camp that thinks that every Google product may be for the chop in the long run a la Google Reader, but I am in the camp that thinks if you don’t use it, you will lose it, so uptake will be key as to whether this has legs as a contender in the space. Given the collaboration functionality of Google Docs and the storage capability of Google Drive it may happen sooner rather than later.

Download Google Keep from Google Play, and have a look at your own Drive version here – https://drive.google.com/keep/

For a few more details (but not many) – here is the Official Google Video: 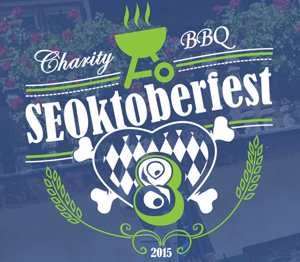 Guest Contributor
Google is increasingly encroaching in to search verticals like jobs and travel. Will their next move be in to real...
Read More
Join our 9,000+ Subscribers
Receive daily, weekly or monthly updates on our latest content