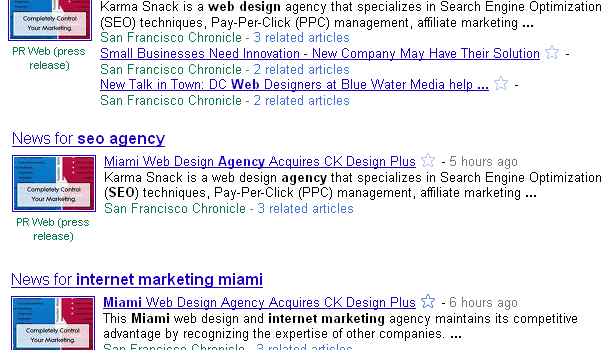 Somehow I’ve managed to get the ‘Google News expert’ badge by virtue of my experience with the Belfast Telegraph. In all honesty I don’t feel like a Google News expert by any stretch. I suppose it’s a case of the one-eyed king in the land of the blind. There are some truly great newspaper SEO people around like Brent Payne (Tribune, he was on our radioshow a few weeks back), Chris Moran (Guardian), and Julian Sambles (Telegraph) – compared to them I feel like quite the amateur.

But people seem to appreciate my sharing of what I learn about Google News at the Belfast Telegraph. So much so that I was asked to present about Google News on the Manchester SEO mini-conference last week. (Which was a great wee conference by the way, I had jolly good fun and met a great many wonderful people, including State of Search’s own Pete Young, Nichola Stott, and Kelvin Newman.)

One of the main points of my presentation was how simplistic the Google News ranking algorithm is when it comes to including news results on universal SERPs. I want to highlight that particular aspect of Google News a bit more in this blog post. 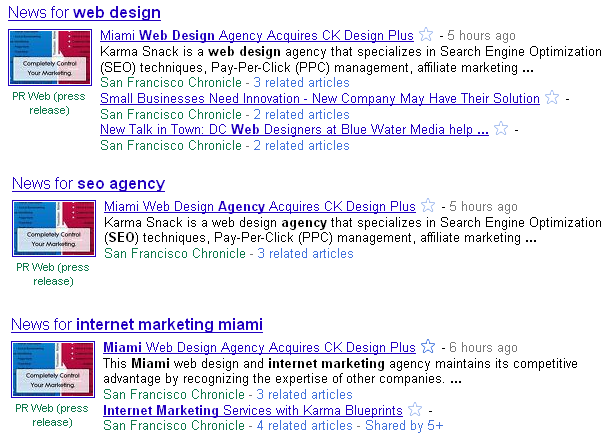 The image above is a great example of how easy a single news article can rank in universal search. It’s a single press release, published on the San Francisco Chronicle website, that managed to appear on page 1 for three very competitive and high volume keywords for several days.

This is just one example of a consistent phenomenon. A few weeks ago Pete Young launched a poll about who the most influential SEO in the UK was. My online editor at the Belfast Telegraph was so chuffed that I was nominated that he dedicated a brief news article to it, which instantly managed to outrank Pete’s own poll – twice! 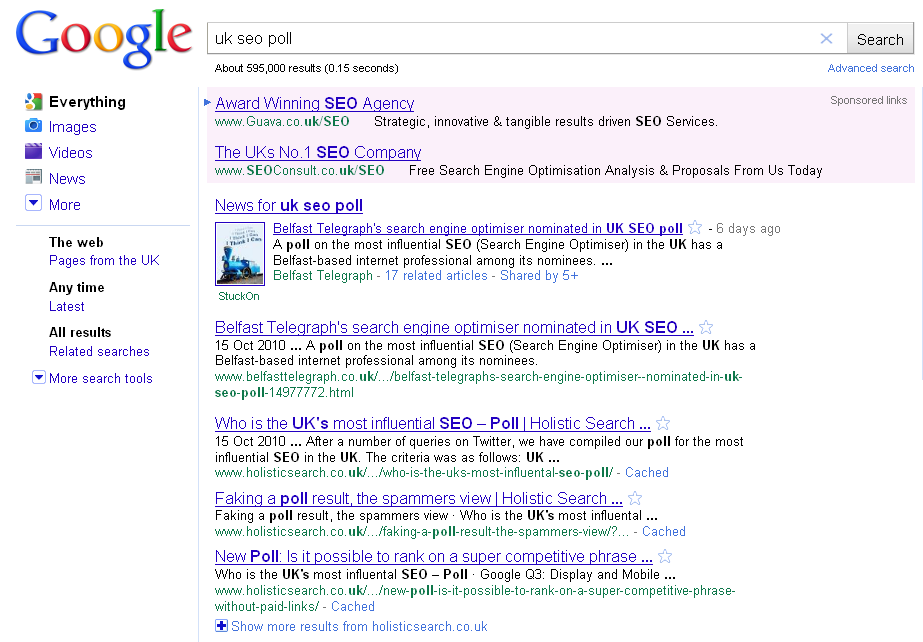 What it comes down to is that when you manage to get a news article – be it a proper news story, a press release, or even a paid advertorial – on to a proper general news site, you’re going to be dominating the uni SERPs for that query for a couple of days.

You see, the ranking algorithm for news on universal search is pretty simplistic. It’s basically a keyword matching algo – if your story contains the keyword, it’ll show up in the uni SERPs.

The only caveat is that your article needs to be published on a generic news site. It doesn’t have to be a big news site, it can be a small regional site, but it does have to be a site that has been marked by Google as being a proper all-round news site. It won’t work if your story appears on a small niche news site.

How can you use this? Well, it just so happens that many – if not all – small generic news sites are struggling to keep their heads above water. Monetising their online presence is a potent issue for these publishers, so perhaps if you give them a way to make money off of their content, you could potentially create a powerful win-win alliance.