I read with interest – and a degree of cynicism the recent research study by Google which highlighted a number of mindboggling statistics as to the impact of paid search in terms of driving incremental clicks to a site. The study for those that haven’t read it yet, suggested that an estimated 89% of ad clicks are incremental. At first glance that suggests a significant missed opportunity to potential advertisers that may be undecided about employing a doubleplay (or even triple play) search strategy which encompasses and tactically uses PPC alongside a mature and highly visible SEO campaign.

One may call me a sceptic – however I have been doing this job long enough to not take any research study at first glance However one has to take a closer look at the figures before jumping to any significant decisions as to how to move your integrated search spend forward in the long run. Firstly one has to accept – Google makes NO money from organic search and much of the revenue Google generates is from sources such as their traditional paid search inventory, the rapidly increasing mobile offering and the display network which Google increasingly takes more and more market share every month. As such any such studies are more than likely going to favour these channels rather than the organic model. One has to ask yourself in a similar situation with your business hat on – would you? 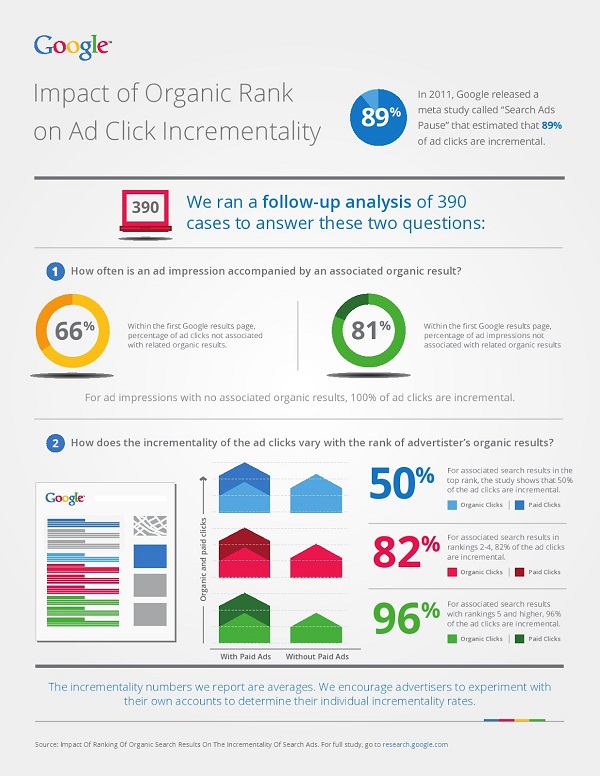 As such one may already call such a study into question, however we should look further into the study before discounting it at first glance. Google as a result of that initial 2011 study have done a follow up piece, reviewing around 390 campaigns to ascertain the impact of search ad pauses on site traffic. One has to again highlight, in the grand scheme of things this isn’t a particularly big segment which is being analysed nor is there any mention of sector, size or impact of brand – something which from previous research studies we have done can quite significantly impact what results are returned – certainly in some research pieces done internally we have seen traffic remain constant – and only the incremental conversions were impacted.

To fully understand the figures provided one also has to take a closer look at the follow up study Google conducted.
– Incremental clicks from sites in position one only were only 50%
– This figure rose to 82% for sites positioned 2 to 4
– At positions 5 and below this figure rose to 96%

When one looks at the Chikita, AOL etc clickthrough data models the figures for the final rung (positions 5 and below) is hardly likely to come as a surprise. Chikita suggested clickthrough of around 6% and below for positions 5, and as low as 2% although Google data through GWT tools suggest this figure is far lower – when overall data is combined. As such the requirement to get into these dominant and visible positions above the fold are increasingly important for search marketeers looking to maximise their traffic volumes for both organic and paid search.

Thus the integrated strategies a search strategist may employ, would look to become increasingly important if one chooses to accept the value of the Google study at face value. The difference according to the study would suggest the impact of being visible at position 1 is likely to result in around a 32% difference in clicks via organic search looking at the figures above. Again this isn’t something that will come as a surprise to many given the increasing real estate we now see taken up by the paid search and blended search result. Again one has to be aware of the changing landscape with both personalisation and localisation now impacting many peoples experiences within the search engines, however there is no doubting position 1 still stands as the holy grail – and that isn’t likely to change in the medium to long term.

Further to that PPC is increasingly utilising many resources previously the sole domain of SEO’s. Local search results are now available to integrate into PPC ads, via Location Extentions (linked to Google Places or manually created). Likewise, shopping results can be integrated with PPC ads (via Shopping extentions) using the Product Feeds many retailers already utilise for Google Shopping. That all affects the impact of the organic results, as many of these again have an impact on real estate which will obviously affect the amount of organic search results that can and will be returned via the search results.

Interestingly the biggest change may still be yet to come. WE have already seen Google testing a number of reduced result sets for organic search results, and with Google looking to now ‘answer questions’ rather than merely return relevant results. Whilst I personally still query the commercial impact of this given the ‘context’ that many commercial search queries have, there is no doubting this could significantly impact both potential incremental traffic that PPC generates and more importantly the long tail opportunity.

Now is the time to integrate not only your organic and paid search strategies but also integrate with the wider marketing mix, whether that be press, TV or PR. SEO shouldn’t operate as a silo – but as part of a wider integrated marketing communications channel where channels are planned with the broader objectives and commercial targets in mind.