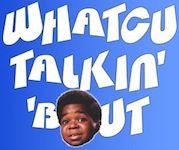 Sometimes it’s easy for us search marketers to get lost in our acronyms – and let’s face it, there are a hell of a lot of them in this industry.

SEO, SEM, PPC, CTR, CPC, SMO, PR– there is absolutely loads of jargon flying around in our industry, and we are constantly coming up with new ways to shorten terms – who can forget one of the latest ones with GSPYW?

It’s easy to get trapped in your own bubbles and circles on platforms like Twitter and forget that we communicate with wider groups of people. My own Twitter account, whilst predominantly search marketing focussed also attracts followers based on music and food/cooking that I share.

Then there are folks that are local to me that I also talk to, and shock horror; some people that I actually knew first in real life! (I’ll be honest – there aren’t that many of them, though there are lots more than the 0 on Google+ at the moment).

Anyway, back to what sparked this post – I was performing various searches to double check some ranking results that I’d seen some good improvements on. Whilst doing this, under one of my own sites, I noticed a Pinterest board was ranking. I of course immediately tweeted about it:

This actually piqued the interest of a fair few of my search marketing friends. It seemed clear to me that this was fairly rare at the moment.

It rumbled on to some further interesting questions about the rel=author and review rich snippets that I’d managed to get working for my own website on the SERP I’d noticed Pinterest ranking on.

However, not too long after the initial hubbub died down on the search marketing front, I was asked the following (I’ve not included their Twitter details here, as I wasn’t sure it was fair):

I knew this guy was vaguely interested in at least social media, so I launched into an explanation of what a SERP was and why this was a bit different from what I’d normally see:

I thought I’d explained this pretty well from trapped within my own little bubble and was bemused with the response:

I’ll be honest – I was quite excited – on the fairly generic term [easy dinners] there was a Pinterest board! Ranking in the top 5 positions! This was new, I hadn’t seen Pinterest appear in a search result before, and from the reaction I got from the rest of the community it seemed no one else had either!

I went on to explain why it was good, and ended with a bit of context:

I was quite amused at the response that garnered:

As I said at the outset, it’s easy for people in the search marketing world to get caught up in their own bubbles with our own jargon. It’s important to remember that no matter how interesting we might find some of these bits and pieces that the majority of people ultimately don’t care.

I found this interesting because I’d thought that Pinterest would rely heavily on social traffic from the likes of Twitter & Facebook. They probably still do, but search traffic was a stream that I thought was unlikely to gain much traction from. It seems they can.

I’ve been talking a lot about Rich Snippets on Twitter recently. One of my friends that I’ve known since school admitted that they’d stopped following me on Twitter due to my unintelligible ramblings. I tried to explain to him how interesting it was that I had a website that has 5 star reviews in Google results, and that I could get my face appearing next to articles I’d published.

All of these things are interesting to the right audience.

In the same way as these sorts of tweets frustrate an element of my audience, I’m sure to a degree my updates about music or food alienate members of the search community that I primarily look to engage with.

What’s the answer then – I have at times considered splitting various elements of my twitter activities into various sub accounts. However I suspect that none of these are ever likely to gain the “reach” of a primary catch all presence.

My answer for now is to plough on regardless, but trying to be more aware of all elements of those that read what I put out into a public space. It won’t work for everyone – they have the option to unfollow me if that is what they prefer, but I hope that won’t be necessary. I’ll trust that people will continue to see value in some of the tweets that I post that interest them specifically, but filter out the rest in-between.