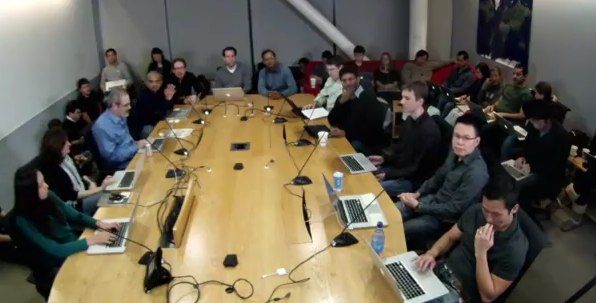 One of the most named points of criticism towards Google is their openness. In the past when you had a Googler at an event you were sure he or she was not going to say a word more than necessary.

In the past year or so this has changed. Google is much more focussed on openness. It might be triggered by the infringements they have gotten where especially the US government has complained about Google being to ‘vague’ or it might have been triggered by the fact that Google for many has become the ‘big and dangerous’ company and they want their brand image to go back to the ‘tech boys’ it was before.

Fact is they are a lot more open, or at least they seem to be. On conferences Googlers seem more open, Google is now giving us monthly updates on their changes, and this week they post a video of their Search Quality Meeting. An 8 minute video showing us the meeting it is all about, or as Amit Singhal says: “This meeting is the heart of what we do, what we approve, how we run search.”

These Quality meetings are a weekly event in Google’s Mountain View offices, as you will see though other Search Quality teams all over the world are listening along. The footage you are seeing below is the meeting which took place on December 1, 2011. Google is sure not to post too close to the actual meeting, it might give something away ;).

It goes pretty far, as Google states in their post. There is a whole segment just about spelling of words which affects only 0.1% of searches. During the session they are also looking at specific searches which go wrong.

It shows how small each change can be, but also how much impact that can have on Google as a whole. You definitely need to be a person of details if you want to work there.

Another interesting part of this video is that it shows who is the boss. Amit Singhal is ‘one of the team’, but also clearly in charge. He has a ‘natural’ leadership air over him. The only one without a laptop (or should I say Macbook?) and a relaxed way of analyzing things gives him the authority which shows he and nobody else is in charge there.

It is an interesting move from Google which doesn’t show us that much, but gives us a positive feeling on Google. It helps their brand more than it helps us get some insights into what Google actually is doing. Still, I like it, keep them coming!

If you would like to know more about how the Search Quality Teams work check out this post from Google.