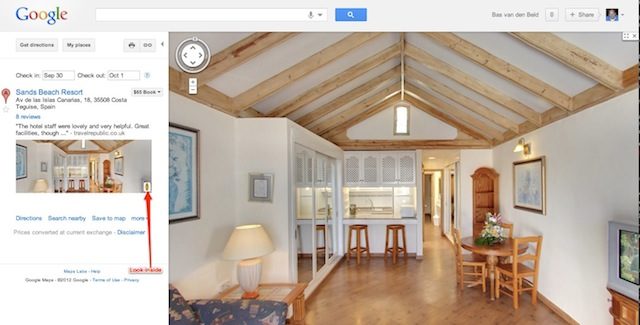 Google yesterday launched a new addition to Google Maps as part of the Google Business Photos service. When using Google Maps in certain areas worldwide (yes, not only US) you can now find businesses and actually take a look inside them.

Google improved the functionalities to look inside in a 360-degree panoramic which allows you for example to see a holiday house from the inside before you decide to book it, not a bad idea in many cases.

To use the functionality you go to Google Maps, find the business and drag the orange Pegman on the left hand side of your screen onto an orange circle on the map.

Here is how Google describes it:

The Google Business Photos service is a program in which local businesses and photographers are brought together to add imagery to Google Maps of the insides of businesses. It is not the first initiative like this to be honest, even back in 2009 there were services already doing this, like for example Everyscape which already allowed you to take a look inside. The fact that Google integrates this specific functionality in Maps however makes it more ‘open’ to the public, as in many more (potential) users. Interesting off course for the businesses who do the photographing for Google.

We all know the ‘funny’ images which have come from Google Streetview in the past. From people doing weird things next to the road to accidents and funny signs, we’ve all seen them. This functionality will provide us with more of them because now these pictures have been taken by humans and not with cars, which makes that there are bound to be people or cameras in a picture somewhere, whether it be via shadow or in mirrors. Let the haunt begin ;).