Skip to content
Home » Articles » Uncategorized » Google Launches Tagmanager: The What and Why 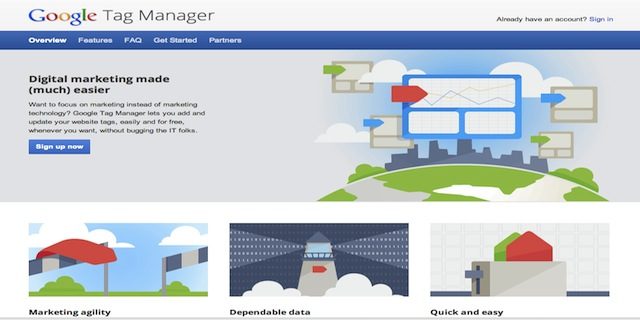 Google Launches Tagmanager: The What and Why

Yesterday Google launched a new (free) tool: Google Tag Manager. The tool allows you to manage the tags on your site. Within a Google interface you can add and update tags.

The tool will make the life of a webmaster easier, but it could also create some ‘funny faces’ since Google is getting into the playing field of some paid tools and people might expect the wrong things.

What is it not?

Even though Google recently announced they were bringing back the Keywords Meta Tag, specifically for news, this does not mean that the meta tags are back for ever and for all types of content. Yes, Google is ‘giving’ us a tag manager, but the purpose is different than managing the good old meta tags.

Another thing which it is not is a tool which helps you rank. Using this tool will not make Google look closer at your site and rank it any differently.

So what is it?

Google itself describes it as follows:

“Google Tag Manager lets you add and update your website tags, easily and for free, whenever you want, without bugging the IT folks.”

Tagging for dummies so to speak. Here’s the video how they explain it:

Why did Google roll this out (for free)?

The tag manager is something which Google is giving away (for free). Why would they do that? The answer on the ‘free’ part is pretty simple: data. With this tool Google will be able to extract more data from the site, giving Google even more insights in your site and the behaviour of the people visiting your site. You even agree to that when you sign up for the service.

But aren’t there already tools who do this?

Many of you might think, wait, tags on the site, aren’t there already tools who can do this? Hey, there is even a tag manager inside WordPress? Yes, there are other tools who do this, even in a paid version, like BrightTag or Ensighten for example. They are most likely not very happy with Google launching this tool. Then again, they don’t have to be too afraid so it seems since Google’s tag manager seems to have a lot less functionality than the ones mentioned. But still, people will be likely to at least try Google’s tool and if it does what they need it to do they will likely stick with it as well.

What is the use?

So what is the use of the new Google Tag Manager, why should you use it? There are several reasons to at least give the tool a chance. If you don’t have a tag manager yet it will help you structure your site in a better way but most importantly the connection to Google Analytics is important. That will make life a lot easier for many web masters.

Anna Lewis, Digital Marketing Executive at Koozai and an expert in the field of Analytics, thinks the tag manager is useful for web masters:

“I think it will make life easier by allowing you to just set up the Google Analytics code and then add extra code at a later stage without having to bug web developers, as often happens. It also has functionality for HTML tags, which can include JavaScript and Macros which could be very useful functionality.

I also like the Rules section of it, which should make customisations more accesible to people who don’t code or have access to people who can code things for them.”

And that is exactly what is the use of this tool: it will make life easier for many.

So should we use it?

As Anna Lewis puts it:

“I’d suggest that if they have a system working now, then stick with it, but when they come to do any additions, customisations or changes I think that would be the time to move over to this system. I think the main snippet and all custom tags and rules would need to be created and checked and then added to the site in place of the current code.”