Last week I attended Search Engine Strategies London (Full coverage by other State of Search Bloggers here) so I wasn’t directly able to post about this but I think it was remarkable enough to do it now.

We’ve seen before that  Google is pushing Google+ to new users by requiring them to sign up for the social network when signing up for a new Google account. Now spotted by Twitter user Robert Matei is a experiment where Google tries to push Google Wallet to new users. When registering for a new Google account Google will ask in the third and final step if you want to also sign up for or connect to Google Wallet. As you can see in the screenshot below you can enter your credit or debit card on the right but there is also an option to skip this step. 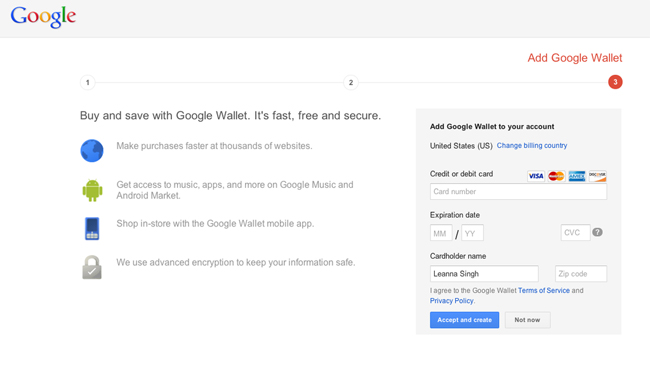 As Neowin.net points out this could be confusing for some new users making it seem that you have to pay for a Google account. It’s interesting to see how Google tries to push / promote other products like Google+ and Google Wallet and maybe other products in the future. As far as Google Wallet concerns it’s only an experiment…