It seems as if there is a bug in Google Webmaster Tools at the moment. Several webmasters were yesterday suddenly seeing sites to which their access was revoked show up again in Google Webmasters. Many of these sites are old sites agencies used to manage.

Others are reporting they are getting notifications that sites from clients they now control have their old agencies or former employees added as a new verified owner.

It looks a security issue which is being reported by SEOs on Twitter at the moment. It was first reported by Patrick Altoft:

Most webmasters report that they have access to WMT, but Dave Naylor even reported he has access to Google Analytics as well: 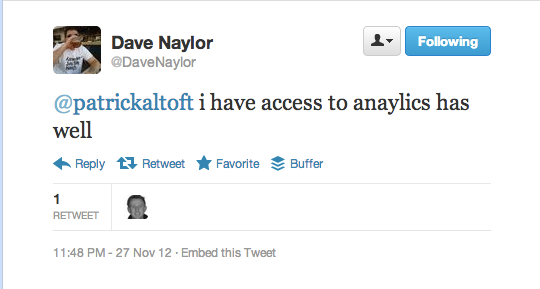 It also means people can access the Disavow tool for old sites. But it could also mean that ‘old’ agencies can do other harm, like revoking access for the current agencies, as Dave Naylor just showed:

At this point of time it is unclear what is going on and how Google is going to handle all of this. If Google doesn’t fix this quickly it could mean a lot of sensitive information (especially when there is access to Google Analytics) is out on the street, something which without a doubt will stir up talks about privacy and more.

Also see this image from Dave which shows him being re-authorized:

We’ll keep you posted if we hear more.

Did you get access or did you see access being granted to others on your sites do let us know.

UPDATE: it also seems some blocked GTalk connections have been unblocked.

UPDATE November 28: it seems as if Google has fixed the issue. They issued a statement to Searchengineland saying:

“For several hours yesterday a small set of Webmaster Tools accounts were incorrectly re-verified for people who previously had access. We’ve reverted these accounts and are investigating ways to prevent this issue from recurring.”

It doesn’t say much but it was interesting to see how Google kept quiet on this matter for a long time and didn’t respond. It seemed as if it was a ‘code red’: nobody says anything, but try to fix it. Which means it was a big deal and Google didn’t directly know what to do. Also interesting was that they didn’t shut down Webmastertools all together during this.