Skip to content
Home » Articles » Uncategorized » Google’s social network is here, we saw the signals, but will it succeed?

Google’s social network is here, we saw the signals, but will it succeed?

It’s been buzzing for months, is Google going for the Facebook attack? Are they going to build a new Social Network? And last night they finally did. And even though it looks like a Facebook rip off at first, it really isn’t.

But if it will become successful remains to be seen. The first comments around the web have been different. Some like it, some hate it. I still have to make up my mind, but wanted to share the first thoughts and views on it.

There has been written a lot already about what it is. So I am not going into that. I would recommend some articles on Searchengineland for example (Danny was talked through +1 by Google last week) or on Wired or Google’s blog off course if you want to dive into the what, or watch the video below.

I want to focus here on some specific issues, because I believe what Google just launched is only the beginning.

Ok, a little bit about the ‘what’. Just to give a little insight before we go on. Here’s the video which Google made:

The problem is that many still don’t get it. In short what Google is doing is it is connecting your Social Circle to Google so you can actually ‘connect’ using Google. They have

+Circles: you can put your connections into ‘circles’. Which is kind of the equivalent of the Twitter Lists but then a lot smarter. Friends with Friends, colleagues with colleagues etcetera. And they can overlap. You can then ‘target’ these circles separately or at once.

+Sparks: Get content on topics you like from Google. This is what Google does best: find relevant content, they are now ‘pushing’ that to you based on the interests you tell Google you have.

+Hangouts: Face to Face chat: hang out with friends online

Actually it looks like different tools combined into one: Facebook, Foursquare, Google and Whatsapp or Pingchat, Twitpic all merged into one platform.

The signals we saw

There have been several signals about the launch of the new Google Project. The most eminent one was the black toolbar we first spotted a month ago. In the past few days a lot more people were seeing this toolbar which we already saw meant it was there to stay.

The black toolbar (sometimes its grey though) is there for a reason: Your Google+ related content will be accessible through that bar. It has to stand out so you will notice it. If you go there now (and you are logged in) you will see +You in the left, which will bring you straight to the Google+ Project. 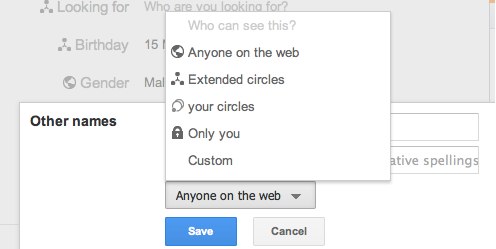 Google has been working on their Google Profiles a lot in the past few months. A redesign, no more private profiles, a lot of connection updates, plus ones collected there, and you could see elements of the profiles return in different places. It all comes together here.

The Google Profile is merged into the Google+ Project. It is connects you with your social circle: your school, your work, your social networks. The Profile is the connection.

What is very interesting here is that you can specify each single item to whether or not you want your circle to see it, everybody to see it or just a select group of people.

So what will make or break this Google+ Project? Will it be successful? The key here lies in the mass of people using it and in the connection with Google itself.

Yes, it looks like Google ‘copied’ Facebook here, but in fact they didn’t. They are taking Social into Google. If you go to Google, its there. And you don’t have to start from scratch. It already has connections and it already has your information. You start and you’re off. That could really mean a big difference.

As long as search comes in

There is one big ‘but’ to this: the success in my view depends a lot on the connection with search. People go to Google first and foremost to do a search. If this is connected to your search they have a chance. If this is simply to become a Facebook competitor and this is it, they will lose. But my hunch is that this is just the beginning.

I don’t think this is a Facebook-killer, Google has a long way to go if they want to beat Facebook on these terms. But if they can really connect it to search they have a chance of getting somewhere.

Our good friend Dom Hodgson was lucky enough to be one of the first to get access to the network. He provided us with some screens which you can see above and below. 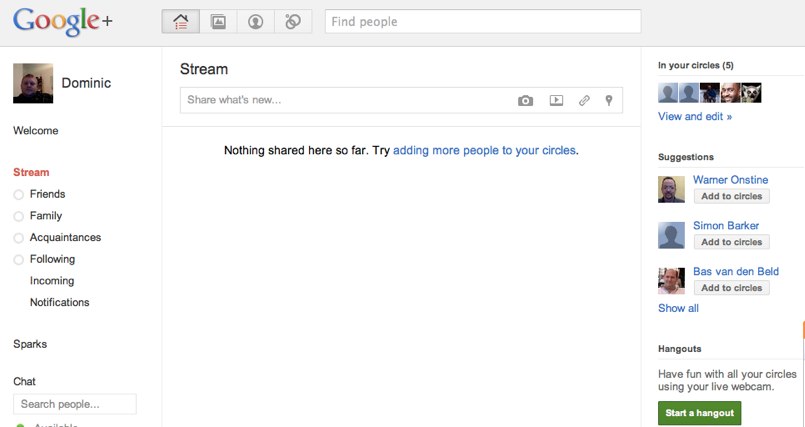 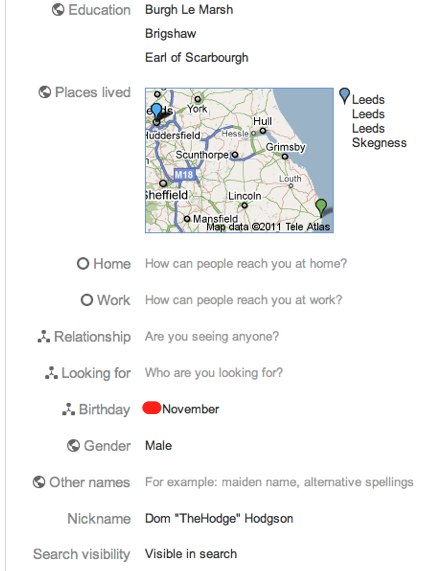