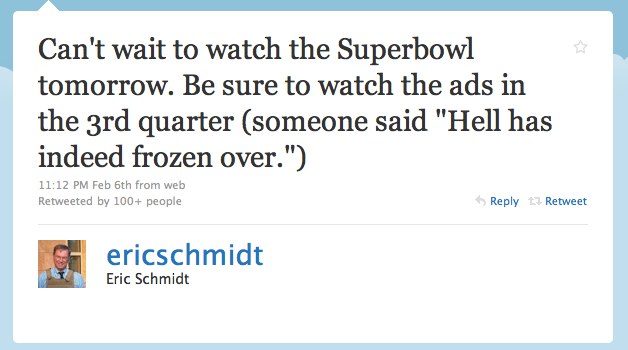 Danny Sullivan named his post at Searchengineland “Hell Freezes Over: Google Airs TV Ad During Super Bowl” and indeed it was a shocker when last week during the Super Bowl final 3rd quarter. Google, the company which never had to advertise suddenly was appearing on the major stage of US advertising: the super bowl.

The ad was announced a day before the Super Bowl by Eric Schmidt himself. Only recently he started Twittering but already he knows how to use the medium to get the right attention. His tweet hinted to Google doing ‘something’ in the 3rd quarter of the game.

Its another step Google has taken in offline advertising which indicates Google is growing up. The once ‘young and vibrant’ start up is now one of the worlds biggest companies and therefore plays the game the big boys do. The TV-ad after all follows a series of offline campaigns, including billboard campaigns in both the UK and the Netherlands promoting Chrome.

You could say its a shame that Google turns to offline advertising. After all, the company used to be an example for the way the new media works. “Who needs the old way of advertising? We’ve got Google!”. However, if you look at it more closely its an understandable step.

The decision to advertise for Chrome using Abri’s was understandable. Google suggested that not many people were actually aware of what a browser was and second, it timed the ads smartly around the moment Microsoft has to give new users a choice of browser.

At first the super bowl ad seems strange however. Most people will already know Google and their market share is high around the world. So why this ad? Just for fun? That would be throwing away a lot of money for nothing, that wouldn’t make sense.

Then there is the theory that Google did this simply for image. With the ad they address their core business: search. With all the acquisitions, launches of new products and even a phone people ‘might’ look at Google as the big company who swallows everything around them. With this ad, they might get some attention back to their core business: relevant search results, there where the Google “image” is good.

Or is it simply that Google now is part of the big boys and therefore is using the same method as the big boys? Why does Coca Cola need to advertise? That is about as difficult to answer as why Google is doing these ads.