How Google is pushing Google+ in your face

Google Plus is here, and whether you like it or not, it is here to stay. Everything points in the direction that Google has taken up Plus as being the core of their ‘new way of working’. Google Plus is their “New Pagerank”.

Google Plus is the core for all the data Google gathers about its users. With that data they will try to make the internet as personal as possible. I’ve explained this right after the launch of Google Plus.

But for Google to get that data and to make that data as valuable as possible they need people to use Plus, or at least to take notice of Google Plus. And even though the number of registered users is high, the activity still seems low. So Google is doing everything in their power to push Plus right into our faces. And that pushing is an indication of what is coming.

Below you can find few examples of how Google is ‘pushing’ Google+ into our faces in a way we cannot ignore anymore. And in a way which is predictive of the future.

In the search results

The +1 in the search results will be something which will grow immensely in the future. In the future everybody will be logged in one way or another so Google can give you the right personal information, and chances are pretty big that who +1-ed a specific page will partly determine the ranking of that page on your personal Google SERP page.

The plus one button on websites

Another very simple and obvious way of pushing Plus is the +1-button on websites. It still surprises me how long it has taken them to get a good one. We even had one who could share items before Google did. But now they do, and its everywhere. Like the Tweet- and Facebook-like button it is now featuring on almost every website. And the websites who do not have it yet will definitely have one sooner or later.

The more websites have a Plus One button, the more people will trust it, even those who don’t know what it is. The thought “hey I’ve seen that before” is a psychological strong thought.

In the app store

I only discovered this one recently, but I immediately understood how important this was going to be. Mobile these days is all about apps. And the two major app-‘providers’ are Android (Google) and Apple. In the Android Market you can now +1 an app. Which also means that if others +1 that specific app, they just might show up in your Android Market.

With mobile being very important to Google, because it gets them the most personal data you can imagine, this will be another major indicator of what kind of personalized stuff they will be serving you on the web and on your phone. Plus, we can be much more ‘directed’ to applications, and thus usage, which ‘fit our (and Googles) needs. 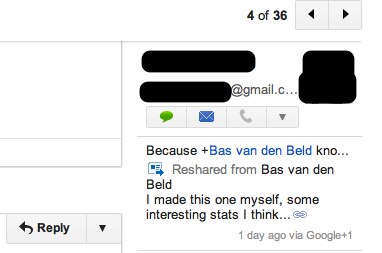 This is a small, but very important way of pushing Google+. The mailbox is where many always are, it is a life line for a lot of people. And if you can get Plus into that life line it is gold. The way they are doing it now, on the side, as if it was an ad, is very gentle and not too disturbing, like Buzz was when it appeared as updates in your mailbox. It doesn’t give you more e-mail, it just triggers you to visit Plus.

When they first started testing the grey bar, people couldn’t believe Google would actually ‘hurt’ their design that much. They did, and with reason. The grey bar is literally everywhere on the Google products. Whether you are using GMail, search or Google Reader, it is there. And it is showing you Google Plus. The red counter shows you you have new messages, and be honest, who can resist clicking on a button which tells you there are new messages waiting for you?

But is not just that. On the left side of the bar you can see your own name with a “+” before it. If you aren’t using Google+ yet that will trigger you for sure, after all, it’s your own name. And if you are not logged in you can see “+You” which again is a way of directly talking to you. That will trigger the most ignorant user to click on it and see what is behind.

Making Picasa into Plus Photos

A very smart move by Google was to change Picasa into “Photos”. Now if you go to your photos or those of your friends you are opting into Plus immediately. There is no way of avoiding the fact that you are within Google+. The Google+ buttons are there, the Google+ search is there. There is no way out.

Pictures are one of the most personal products people have. And they like to share those with their friends and family. It is not uncommon to put up a batch of pictures from your holiday on Picasa and to let your friends in to share your holiday feelings. Those friends now are introduced to Google+ (if they weren’t before) in a way they trust: via you.

Finally a way in which Google is pushing “+” is in ads. Where they make the money. The “+1-s” are now showing up within the ads, showing you not just how many people like the product, but also who of your friends liked it. Again, a very powerful tool to persuade a person to actually click on that ad, after all, if your friends has clicked it, and liked it apparently, there is no reason why you shouldn’t, right? 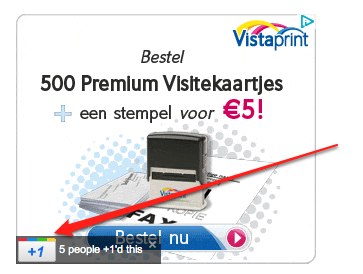 Using the Plus one button in ads can be a real moneymaker for Google and they will gladly milk this out I suspect. And it will also mean that advertisers will focus on that button and will try to get as many +1’s as they can to have the biggest chance that one of your friends will show up when you see the ad. Meaning that advertisers will push +1 even more.

What can we learn from this?

These are just a few examples of how Google is pushing Google+. We’ve seen the big blue arrow, we can see plus one showing up in our Webmaster tools, our Analytics and other related products. And there is more to come. Google already announced that Google Reader will get the possibility to “+1” an article you have read.

But what can from the +1 button being all around? It gives us a little insight into the future. Google will integrate Google Plus e v e r y w h e r e  they possibly can. And they will use it. We can argue about whether or not it will be a success as a social network, on other levels that discussion is useless, because Google will make sure we HAVE to see it an HAVE to keep it in consideration.

And finally Google will use Google Plus to make the web as personal as possible. No SERP will be the same anymore. Plus will rule the waves.