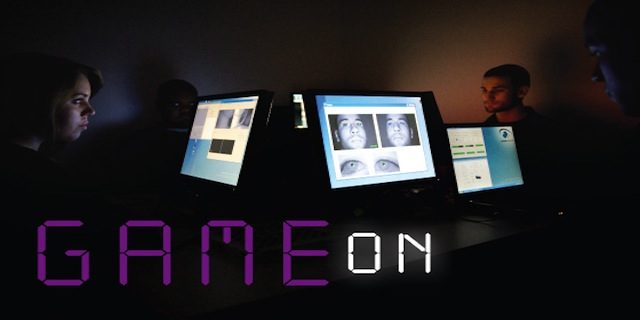 The Impact Online Gamification Can Have On The Real World

Lately I have come across the term ‘gamification’ a lot and so I’ve decided to look into this topic a bit more in-depth. First of all I would like to give you a brief explanation of the term itself, further we’ll be looking into trend predictions for the years to come followed by an outline of brands which have successfully incorporated gamified apps into their overall online business strategy. And last but not least I’ve saved the best until the end: 2 real-world examples of gamified apps and the impact they have had on the local community and their surroundings!

Gabe Zichermann a well-known gamification guru and chair of gamification summit and workshops defines the term as ‘if you can make something more fun, and include notions of play, you can get people to do things they otherwise might not want to do’ hence encouraging brand engagement and loyalty. According to Gamification Wiki it ‘typically involves applying game design thinking to non-game applications to make them more fun and engaging’. As a result gamification is the process of implementing game mechanics into a non-game entity. The human species desire for community, pride and competition is the driving force behind organisations who have already applied gamified apps to their business strategies.  The very basic psychology behind it is to provide positive reinforcement for each action taken to drive motivation. This is done through the distribution of points, badges, rewards, incentives etc.

Since ‘Play’ is the foundation of gamification it is worth exploring what it means. I came across a very good quote by Stuart Brown

who stated that ‘play is not the opposite of work’ but more importantly ‘the basis of human trust is established through play signals and we start to lose those signals culturally when we grow up’. Can you imagine life without playing: no humour, no games, no fantasy? The human species is designed to play through our whole lives so gamification does actually not sound that un-logical, does it?

Future Trends and Predictions for the Years to come

According to Gartner Inc. 70% of Global 2000 companies will have at least one gamified app in place by 2014. But that’s not all M2 Research forecasts have shown that the online phenomenon is predicted to be worth $2.8 billion in the US by 2016 alone. The term ‘gamification’ has also made it into the Oxford Dictionary for the first time in 2011. The UK alone has spent an astonishing £3.2 million on the sheer enjoyment of playing games last year. I think those predictions alone are worth looking into this subject in more depth.

It’s pretty much everywhere, did you notice?

As we’ve said previously this topic is relevantly new to me and as a result I was surprised to see how often we are actually exposed to gamified apps therefore I would now like to provide you with an outline of well-known brands using this mechanic.

I guess most of you have heard about Foursquare probably one of the best known gamified apps. The location based networking field has realized the potential of single player mobile social networking. Instead of relying on the actions of others the primarily focus is on one single-player’s game. Whereas the player ‘checks-in’ at venues using his/her mobile device by selecting from a list of venues nearby. The location is based on the GPS hardware on the mobile device as provided by the app. By spring 2012 the service had 20 million registered users.

So how does it work? Every time a player checks into a venue they’ll then receive digital rewards. Check-ins require active player selection which will then be rewarded with points. As previously mentioned to keep the player’s motivation and engagement as high as possible feedback and acknowledgment of their undertaken actions has to be provided in real-time. Foursquare is tackling this hurdle with 4 different integrated game dynamics in other words with the distribution of digital trophies such as: 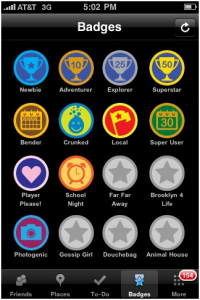 As Kevin Warhus puts it right ‘Since the dawn of Foursquare and a variety of other social check-ins, rewards and badges have become all the rage….Companies big and small have long ago realized that it is a great way to connect with customers and reward them for the use of their service…people naturally enjoy being praised for their actions and collecting proof of their invested time and energy to show off to their friends.’

Moving on from Foursquare I’ll now give you a few examples of gamified techniques and I am curious whether you’ve figured out yourself that you’ve been exposed to gamification to some extend.

LinkdedIn: The social networking site that helps to connect professionals uses a progress bar on an individual’s profile to show how ‘complete’ a profile is, aiming to encourage users to continuously add new skills, and updates hence increased time spent on the site as well as encouraging engagement. SCREENSHOT OF PROGRESS BAR

Starbucks: similar to eBay the coffee giant’s  app rewards players with stars, status levels as well as incentives to keep them playing and show off their acheivements to others.

Nike: the sports’ brand gets people involved through achievements, badges, challenges and rewards. See how it works here

American Airlines: Quiet similar to LinkedIn, when booking your flight with American Airlines you’re exposed to a progress bar telling you how many steps there are left to complete your booking acting as a motivational drive.

Since I have now outlined a few well-known brands that have adopted gamified apps I would now like to look at 2 examples in more detail to give you an idea just how well this technique can work to increase online brand engagement as well as the astonishing impacts it can have on local communities and their external environments. Here are my 2 favourite picks.

Saving your Planet: The Recycle Bank

When thinking of green initiatives the word sustainability is never far off. The Recycle Bank managed to re-write the rules of sustainability by tapping into the player’s desire for competition and reward whilst saving the panlet.

The initiative kicked-off a few years ago in Massachusetts whereas various households have been competing against each other to lower their carbon footprint. The results were quiet something as the winning family seriously managed to decrease theirs by 63%! As a result a far more international take on this issue  is the Recycle Bank which uses the power of gamification to improve environmental compliance. Until now it has game mechanics such as points, rewards and challenges to further drive the breakthrough. When it first started the project has seen a 16% recycle increase in Philadelphia alone. Here’s how it works.

Just think how powerful gamification is when used for the right purposes.

Thanks to Kevin Richardson’s Speed Lottery invention the social challenge of tackling speeders has reached a whole new level. In 2010 he entered the ‘Fun Theory’ competition in partnership with Volkswagen Sweden and DDB Stockholm. Whereas the focus was on tackling a serious social problem in a more fun way. Even though the idea itself might not be particularly high in novelty but high it is definitely on behavioural science. His winning idea was to leverage speed-capture technologies and traffic cameras photographing all drivers passing it. The portion of the subsequent fines levied against speeders would be pooled in a lottery, with a random winner periodically drawn from the speed-limit adherents.

The results were seriously astonishing! Before the installation of Richardson’s speed camera the average speed was 32km per hour, however afterwards it was down to 25km per hour despite its inability to actually issue real fines. Mr. Richardson’s believe is that traffic law should be focusing on rewards rather than punishment (can you see the psychology in that?). His innovative idea has become reality in Stockholm. Can you imagine what impact that campaign could have if rolled out globally and how many accidents could be prevented?

I hope this post has given you a basic outline of what gamification is and the initiative’s appeal to deal as a vehicle to influence. The purpose is to increase brand engagement and loyalty amongst users. Whereas the basic psychological principle is to provide users with feedback in regard to their undertaken action in real-time to make them aware that their actions have been ‘appreciated’. We are living in an incentive driven world where we expect to get something in return for the actions we take. Gamification as a result helps to provide incentives (where no incentives have been in place before) or to increase a current incentive for customers to stay online engaged and loyal with a brand.