Skip to content
Home » Articles » Search Engine Optimisation » Pirate Bay is out of Instant Search, ‘Bisexual’ back in? 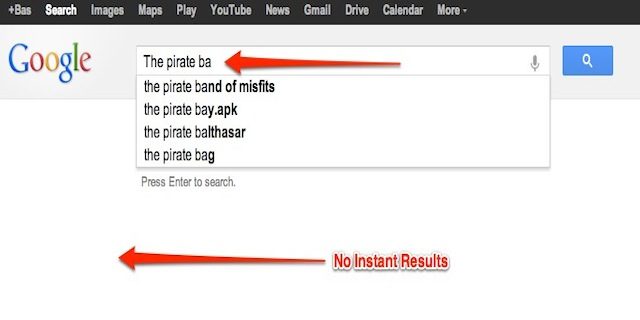 Pirate Bay is out of Instant Search, ‘Bisexual’ back in?

Two years ago Google introduced “Google Instant”, which was an extended version of Google Suggest. Now not just the suggestions showed up, the page actually changes when typing in your search query, making that some people might decide to stop typing and pick a result which seems to be to their liking.

Google now has banned another term: Torrentsite The Pirate Bay is taken out. On the other hand a much discussed term might be returning: bisexual.

The Pirate Bay is out

Downloading is one of the widely discussed topics on the web: should it be allowed or not and if not, who should be the one preventing it. Torrentfreak, a torrent site, now reports Google has removed The Pirate Bay from showing up in Google’s Instant Search. This as part of the filter which Google has put in place in January where other “piracy-related” terms like “utorrent”, “BitTorrent” or “RapidShare” were taken out of the suggestions. Now the Pirate Bay has been taken out as well.

“When people type in ‘thepirate’ the two domains are no longer offered as a suggestion. As a direct result, the search volume for these terms dropped instantly.

A Pirate Bay spokesperson told TorrentFreak that they are not in the least bit hurt by Google’s “half-baked” attempts to keep people away from their site. They haven’t noticed a decrease in referrers from Google, and even if that was the case it wouldn’t be a problem as only a tiny percentage of The Pirate Bay’s traffic comes from search engines.”

Google is deciding for us

The ‘problem’ with banning words within Google Instant its that it is Google who decides which words are allowed an which are not. And that can lead to a lot of discussion: is Google deciding for us what is ‘good’ and what is ‘bad’ ?

BiNet, a bisexual advocacy group, has been trying to get Google to unlock this specific term. They say it wasn’t just banned from Instant and Suggest, it was also downranked in Google’s search algorithm, which means sites about this topic were pushed down in the results, something which is never proven by the way.

BiNet now claims it has come to some sort of an agreement with Google about the term. They are claiming the word has been ‘unblocked’. BiNet USA President Faith Cheltenham says:

“It’s not every day one of the biggest companies in the world changes its mind, but we are thankful that Google now sees bisexual people just like everyone else. It will take time for bisexual search terms to be ranked as they were before the ban, but now bisexual people and their allies have a fighting chance to be seen, heard, and understood.”

The question is whether or not Google indeed changed this however, because a search on the term still doesn’t give us more suggestions. Maybe it takes time or maybe Google has already turned back the measurement, or BiNet is trying to push Google by claiming it is a done deal.

The ‘suggestions’ will always remain a discussion. It is part of the filter bubble discussion: do we want Google to decide what is best for us or not? What are your thoughts?