For businesses to remain competitive online, they must recognise that their largest competitor is no longer their industry rivals, but rather Google itself. In recent years, the search engine giant has progressively increased its market share in various heavily feed-based verticals, including hotel bookings, flights, and more recently recruitment.

After being caught testing its own job portal in May 2017, Google officially launched Google for Jobs at its Google I/O event of the same year, although it didn’t officially comment on the new accompanying Job postings schema until several months later.

Google for Jobs is an enhanced search feature that aggregates listings from job boards and career sites and displays them prominently in Google Search. Using the power of machine learning, Google has rapidly expanded the reach of its new SERP feature, even becoming the second largest job platform in the UK according to SEO tool Sistrix.

The image below shows job listings in the Nottingham area. 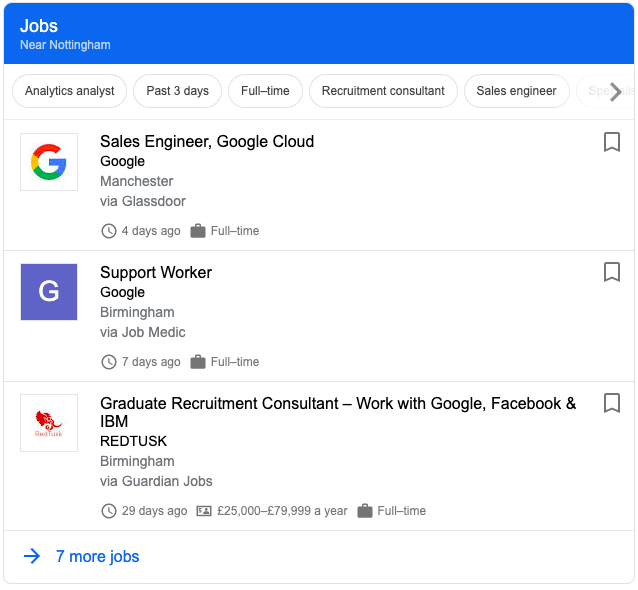 Google for Jobs allows people to read job descriptions and even apply to positions within the SERP feature. Webmasters can make their job postings eligible for inclusion by marking up their roles with the appropriate schema. The search engine giant is constantly pushing for more data for its job postings, and is now reportedly hinting at ‘Base Salary’ being a necessary property to include in the near future. 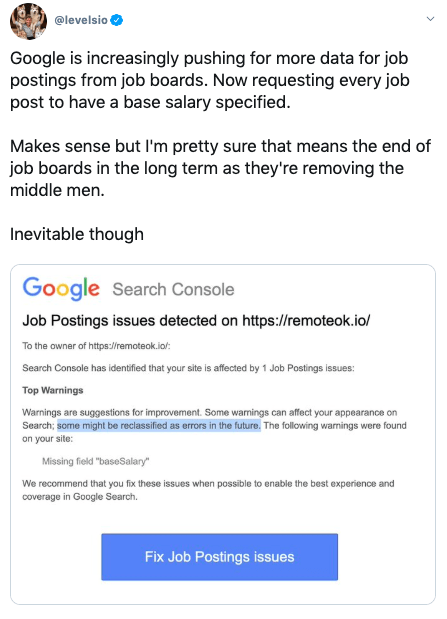 Google’s reasoning behind the update was that it sought to improve the candidate experience and counteract the saturation of job boards in its search results. However, the more cynical amongst us believe that Google was simply trying to protect and grow its market share. Following Microsoft’s purchase of LinkedIn in 2016 and its growing dominance in the industry, Google may have introduced the search feature to avoid people navigating to these competitor sites directly rather than using Google’s own search engine.

Google has also extended its reach into other industries, most notably holiday bookings. After purchasing ITA Software in 2011, Google launched Google Flights, its online flight booking search service. Competing with the likes of Kayak and Expedia, the platform has grown in popularity, especially since its relaunch in 2018, and now enjoys a large portion of the SERP real-estate for flight related searches, especially since it increased the number of paid listings that could be shown in the results. 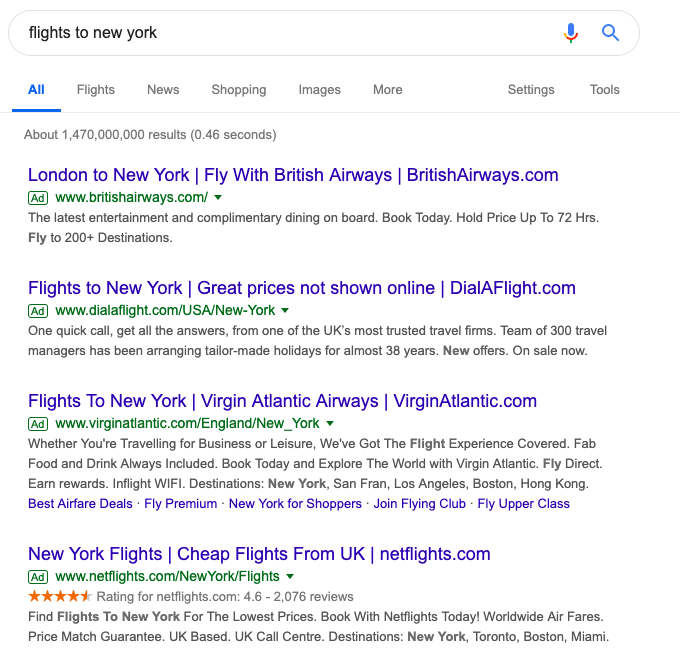 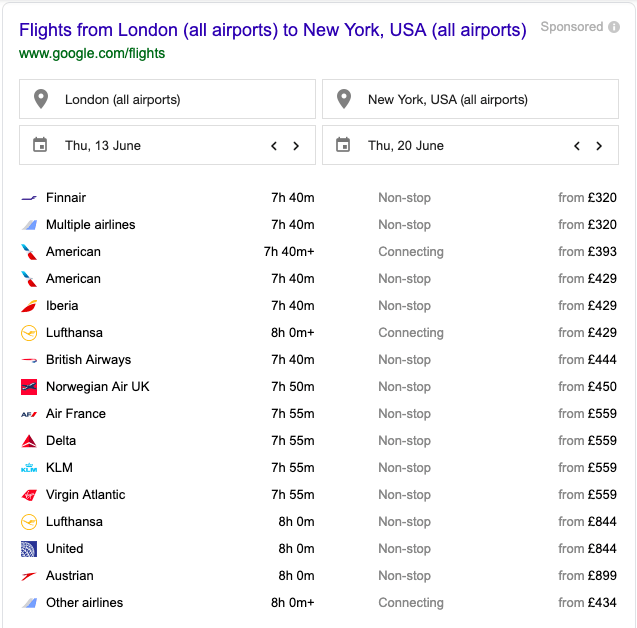 Google is showing no signs of slowing down in its expansion efforts, as evidenced by the launch of its dedicated full-scale hotel search site in March 2019. With Google implementing these industry-changing features to their search results on a seemingly yearly basis, how long until we see a similar update in another feed-based vertical?

In my opinion, not long at all. And there’s a specific industry we can should look to expectantly: real estate.

Why? Simply because the real estate industry holds many similarities with the verticals that Google has already targeted:

Google has a tendency to make big plays into spaces that are feed-based or easily scraped, and easily aggregatable, if even through Machine Learning (ML). While third-party property sites like Rightmove and Zoopla provide existing sources for property data, Google could gather data straight from feeds provided by industry property sales/letting software, thereby ‘cutting out the middle man’.

Google could take a similar approach to what it did with Google for Jobs and pull data from across the internet, including property portals and individual websites and classify and present it using its AI. It would eventually roll out a new type of schema to facilitate this.

Many property companies already pay specialist web agencies to use platforms which come with Zoopla & Rightmove integrated into the codebase. If a property feed were to be introduced, these companies could eventually take a similar route with Google in the future.

We’ve all seen Google’s drive to present as much useful information as possible in the SERP, with Sparktoro reporting that around 49% of searches in 2019 have resulted in no clicks. This SERP feature would simply be the latest iteration of this.

The potential for monetisation

It is no secret that Google’s subsidiary ad business is central to its commercial success, with some estimating it to represent 86% of Google’s total revenue. The search engine giant has gradually expanded the prominence of paid listings in its search results and even allows paid listings in SERP features like Google Flights. Why, then, should real estate be any different?

Google’s online advertising platform could be the perfect place for real estate agencies to spend their advertising budget. Given the sheer size of the real estate industry, which is currently valued at 250 billion euros in the UK alone, Google would be set to generate a huge amount of new revenue. And the rise in searches reflects this: 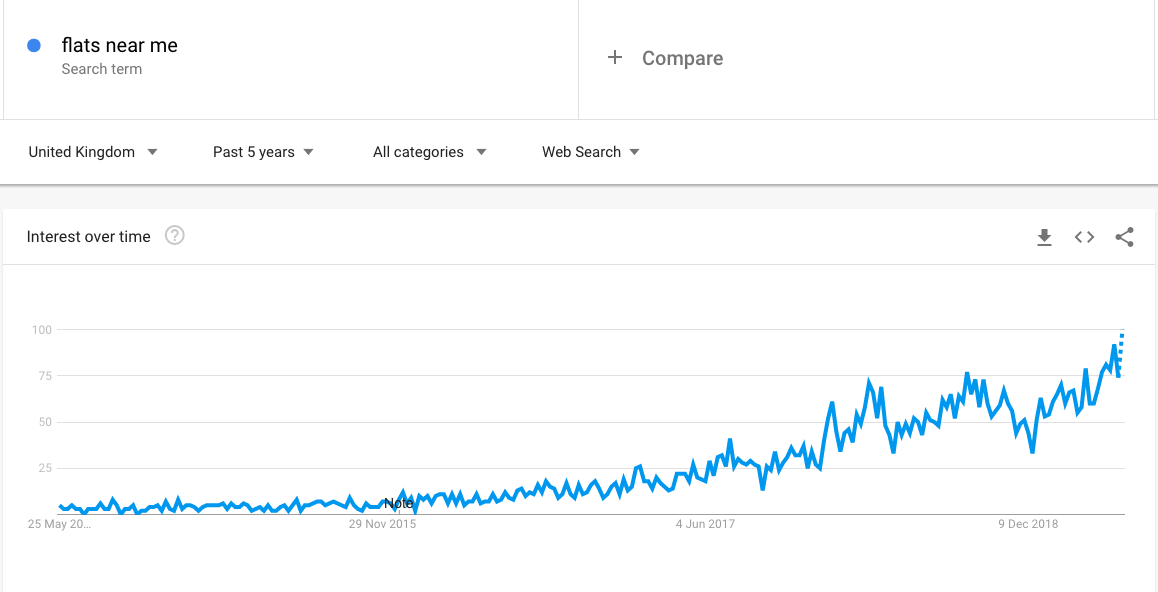 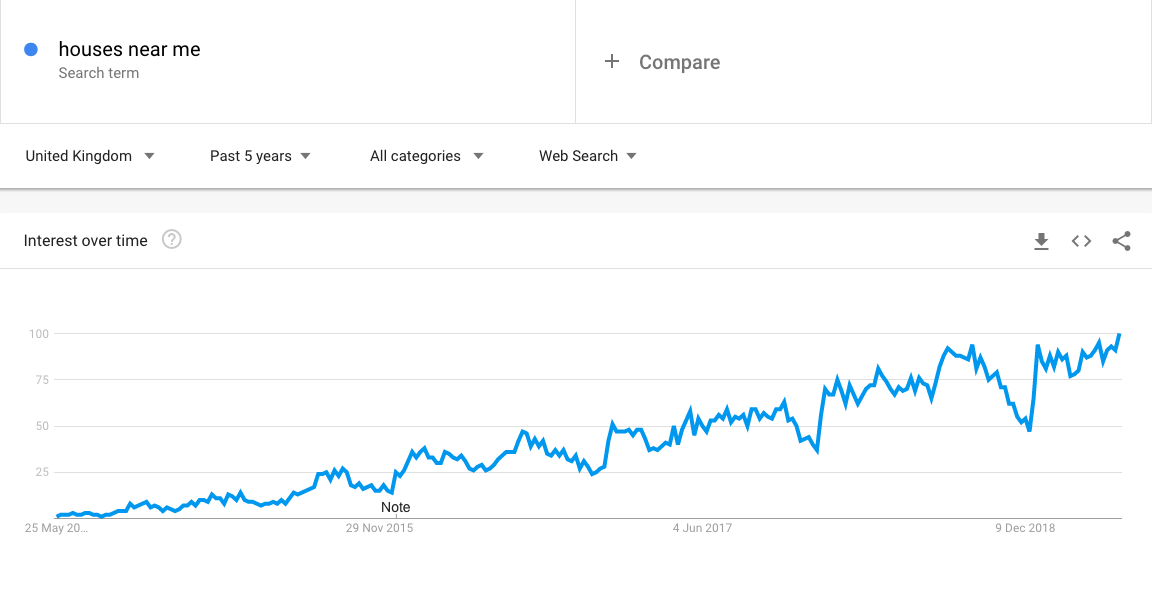 Similarly to job postings, real estate is an extremely saturated, feed-based market. Zoopla, Rightmove and On The Market are all dominant players in the industry, and many of their house and apartment listings are duplicated across the different property portals. This represents a very real reason for Google to step in and create a more streamlined service that will help users make a more informed decision.

As detailed in Google’s mission, the search engine giant wants to continuously improve the usefulness of its results. A SERP feature is the natural next-step for this industry, as allowing users to see properties in their area, recently uploaded and filtered by their criteria, is the kind of user experience its searchers are looking for. If it works well for jobs, why not for real estate?

Below is a mockup of what a future ‘Real Estate’ search listing could look like. 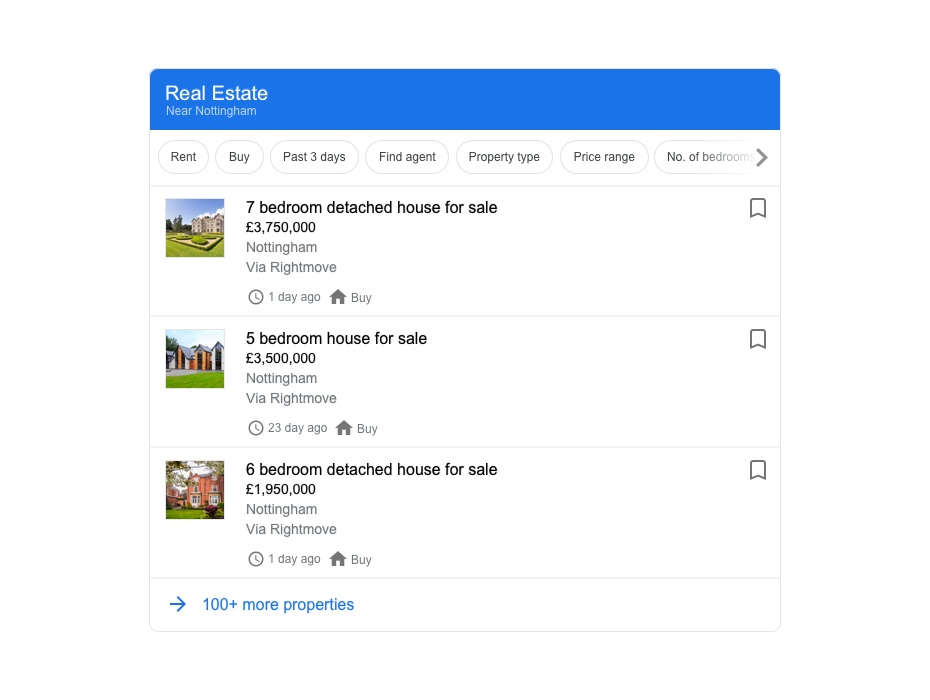 As you can see, users would have the ability to filter results by ‘Rent’ or ‘Buy, as well as the type of property and its price range. Given that this information is already available in property portals, Google should have no issue in collecting and presenting it to users. As mentioned above, we could also see some of these results being paid listings.

Google has made no official statement on a potential SERP feature for real estate, nor is there any evidence of Google testing a feature of this kind – yet. Nevertheless, it’s crucial for digital marketers to be forward-thinking and proactive in adapting their strategies for large changes in the SERP landscape. This article remains theoretical for now, but the fact that we can realistically conceive a SERP feature of this kind likely means that Google has as well.

The launch of Google Jobs should not have come as a surprise to anyone, and neither should its potential foray into real estate. Google will want to diversify its revenue channels as much as possible, and any market that allows it to do so will be in its sights. It is no longer a matter of if they succeed, but when.

Hugo Whittaker is an SEO Executive at Impression, a full-service digital marketing agency based in Nottingham. He has an aptitude for link acquisition, EAT-led onpage strategies and creating engaging content marketing campaigns.