Is Google in Android Trouble? New Accusations of Dominance Abuse

According to the Guardian Ilya Segalovich, co-founder of Russia’s leading search engine, Yandex, has said Google is “abusing its dominance to shut out competitors in cyberspace”. Segalovich places his remarks in response to comments made by Sergey Brin almost two weeks ago in the same Guardian where he said web freedom is facing big threats.

Interestingly enough Brin apologized for the words he used in that specific interview only a few days after the interview on his Google+ page.

The Yandex’ founders remark is another sign that Google has some hurdles to take in Europe when it comes to the image of their dominance.

The remarks are largely aimed at Android, which has been under fire for the past few days with an Oracle patent case going against them. According to Segalovich Android is a “strange combination of openness and not openness”

Segalovich also suggested Google is playing a ‘foul game’ with Chrome where it is supposedly hard to use another search engine than Google. To the Guardian he said:

“Things are definitely going where more and more control is in the hands of platform providers. It’s interesting that it’s not only mobile, but it’s also about browsers,

That is a part of the open and closed issue, in my head. If you own the browser, the browser is the platform then the search is yours. It is the same question … it should be addressed to Sergey himself. He should think about it also. It’s a little wider than he described it.”

Segalovich truly believes the “semi-open” nature of Google’s Android operating system for smartphones is hurting other search engines, including his own, Yandex, because you cannot send anything to it, but you have to watch how the code is changed by Google.

In other words: apps and other features might not be working well because the code doesn’t connect to the Android code properly therefore resulting in bugs, which then results in people not using the platform.

The question is whether Segalovich’ remarks in the Guardian will actually affect Google. On its own the words of Segalovich might not hurt Google a bit. But if you think a little further Google might be running into some issues with Android related to what Segalovich is talking about.

Segalovich mentions the coding of Android and how applications might not work properly. This could mean a major blow for Google in the long run if this is true. Android developers will not want to (continue to) work on a platform which will constantly deliver bad applications.

Now as an Android user I can tell you that not all apps are bad or buggy, but the danger could be that if apps are then users will find Android less tempting to use than other platforms like Apple or Microsoft and will leave. If the app-makers go before them then a domino effect can take place which might cost Android some significant market share.

Unlike the US regulators the EU regulators want to interfere in any possible way they can. And it sometimes looks as if they have a Google Alert set up for specific terms like “is not open” or “abuse of dominance”. Even the small remark made about the Chrome browser, where it might not be easy enough to change a search engine can trigger the regulators in Brussels.

If they do Google again needs to put a lot of resource in explaining what they are doing and even changing things. Now Google does have a lot of money and thus time, but will they ever get sick of that and give us Europeans an even more downgraded version of their products?

There are two things which Google gets out of Android: data and money. Data is user data which will help them develop other products.

Android is also making Google money, and lots of it. The Oracle trial show us just how much. At the trial a slide from 2010 came up showing how Android was doing back then. 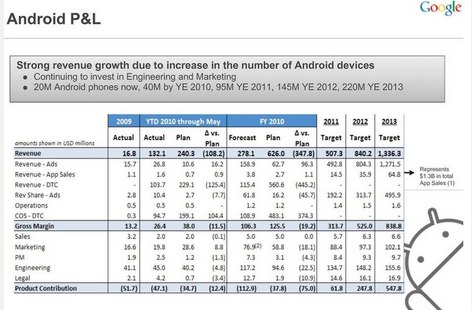 Important to notice here is that the money doesn’t come from app sales that much (unlike with Apple), but from ads. And that is closely connected to the code of the apps…

If Google would have to change this, that could cost them money.

So in conclusion: Segalovich’s words might not hurt them in the short run, it does say a lot about Android and the reason behind the words might be reason enough for Google to be worried just a little bit…