Skip to content
Home » Articles » Uncategorized » UPDATE: Is Google Partnering up with Amazon? Or does Plugin fool us? 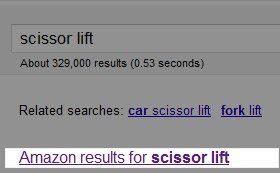 UPDATE: Is Google Partnering up with Amazon? Or does Plugin fool us?

Original title: Is Google Partnering up with Amazon? Tests Suggest they are

Update: it seems as if a Chrome Plugin, “awesomescreenshot” might be the cause of these results showing up with certain people. This is not yet confirmed but could explain things. Google has not confirmed or denied anything was going on.

“Do no Evil” was a motto which was created a while ago. Everything which Google did had to be tested to that motto. Was it potentially evil? Don’t do it. Many believe that the motto is no longer in use and hasn’t been in use for a while. We’ll probably won’t know until another Googler or another Stephen Levy-type of journalist will report on it from inside Google walls. But if the tests some are seeing at the moment are true than another major group of Google-dislikers will probably arise.

Several people have mentioned on Twitter and in a blogpost that they are seeing “Amazon Results For…” on some of their queries. These results are placed on top of the regular search results, pushing down not only the regular results but also other shopping results. So far it is unclear whether this is a test, something Google is really doing or if it is a deal with Amazon or not.

Initially Blogstorm noticed the results for “prohormones” on Google.co.uk:

Here you can see that the results are indented, which looks kind of strange. When this came out others noticed it too:

In this search the results are more ‘styled’ than in the one above, but it does the same, showing Amazon results.

The third result is one on a search for “Ralph Lauren Polo” which shows again Amazon results on top, even above the Ralph Lauren website:

What could this be?

The first responses immediately were: Google has struck a deal with Amazon. That could very well be true, but I want to explore all the options. One thought was that this could also be a brand-related test. Like Bing does for example with UPS. But chances on that are slim because Amazon here even outranks the brand (Ralph Lauren).

A third option could be that this is shopping-related and they are testing it on Amazon-results only, since they don’t want to wake up any others.

The biggest chance however is indeed that Google has struck a deal with Amazon. That can have major implications. What will happen to Google Shopping? How will advertisers feel about that? Is Google adopting a new way of advertising? And what will this do to the trustworthiness of the Google results? With Amazon and Wikipedia leading the pack, what use will Google have?

The tests bring up more questions than answers right now, will be continued without a doubt…