This is the latest post in our 2015 Summer Series, where we give young talent in digital marketing a chance to shine in front of State of Digital’s audience. Today we feature Jack Telford from The Media Flow.

Twitter. I’ve been told that it’s ‘the first draft of journalism’, that my two bosses met through it, and that the designer I’ve worked so closely with has earned herself a long-term boyfriend and several jobs out of it. I’ve read that 82% of consumers trust a company whose leadership engage on social media, and that 302 million people actively use Twitter. As a digital professional, you’ll slap me for stating the obvious, but Twitter’s clearly a big deal.

So, despite my best efforts, why haven’t I made it big? Why does logging in fill me with disappointment when yet another engagement-free tweet disappears amongst countless others? Am I boring, don’t I get it, or am I just not putting enough effort in?

I’m convinced that there’s still time to escape the lonely Twittersphere which I currently inhabit, so I’m going to do whatever I can to make Twitter work for me. I’ll take you through every step of my journey; update you on my personal achievements, and offer insights from those I talk to and what I read. I can’t promise that I’ll stay grounded as I rise from mere mortal to pillar of Twitter society, but I can promise that I’ll keep you up to date.

So where are we now? I’ve been a member since 2009, and average 0.2 re-tweets and 0.94 favourites per tweet, earning myself 27 followers. My account is anything but social, anything but productive, and adding no value whatsoever to my digital life. It’s time for a change.

Day 1:
Where better to start than with a 5 step guide to harnessing Twitter? This is going to be easier than I thought! My main takeaways from this are to think about the value that I can add, decide who I want to target, develop and maintain a tip-top profile and just generally get involved.

My strategy for adding value is to share quality links; and to pinpoint my target audience, I’m envisioning someone within the digital industry who’s open to connecting and knowledge-sharing. Job number one is to follow some new people and engage with their tweets. The plan is to re-tweet and comment on digital related tweets to start conversations and show an interest. Here are some early attempts: 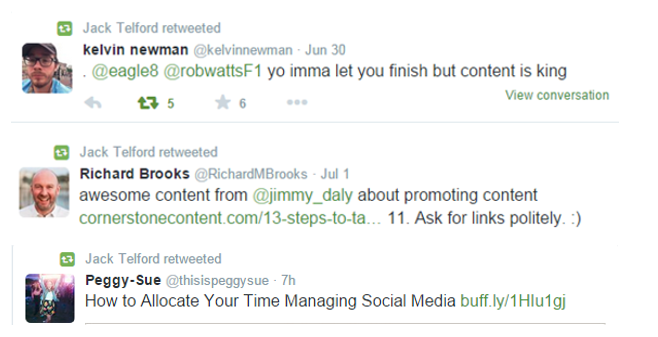 As for my profile, I’ve changed my clubbing profile picture to a nice smiley face. I’m also making my ‘about’ section more personal, rather than just featuring my job description. 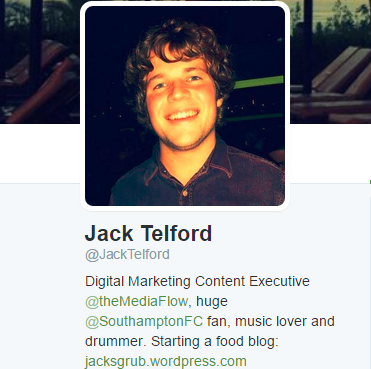 Finally, I’ve linked to my blog, so people know that I’m not a robot, or at least that I’m a robot with some interests. 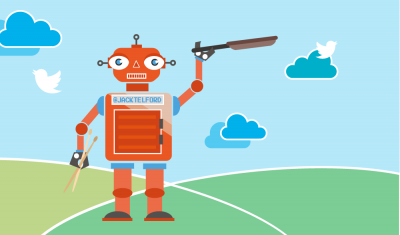 Day 2:
This morning I’ve used Twitter Analytics to see where I’ve been getting it right so far. Interestingly, my most engaged tweets ever were these:

There are two main things I can learn from this. First, use a strong hashtag, I’m sure that #foodporn, #copywriting and #contentwriting helped these tweets reach more people. Secondly, tweet assertively, and with clarity and simplicity. I’ve also found that using hashtags around trending events draw in more impressions, as the three tweets below show:

Day 3:
I’ve always found it hard to draw the line between personal and business tweeting, thinking that posting personal tweets would deter business followers, and vice versa. In the past, my solution was to stay on business, but the interaction was dismal, as you can see: 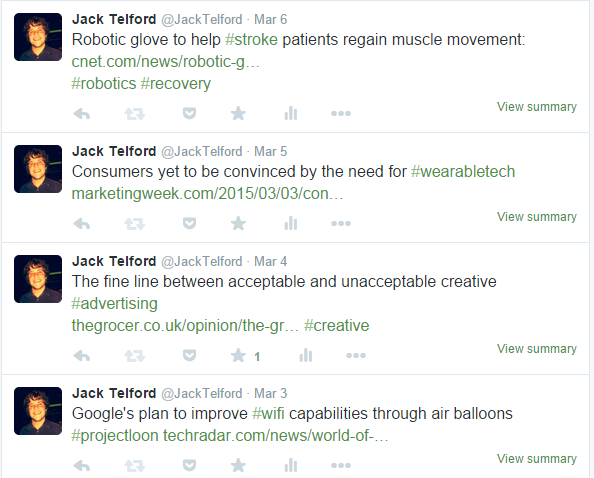 I was trying to appear professional; but in reality I looked fake. I’ve realised that we live in a world where work and social life is interwoven, and we are allowed – even expected – to show our interests. It’s time to accept that, as Diane Hessan says, ‘even business associates want to know about the whole you’, and that you must communicate honestly to build a trustworthy personal brand. Informal tweets like these below just wouldn’t have appeared under my name before this week.

Day 4:
They say that every rose has its thorn, and whilst I’ve gained followers, connected with new people and started to add value, I’ve come across some bad news on Twitter click through rates. Derek Thompson found that only around 1 to 2 percent of those engaging with his typical tweet actually went on to click through. Similarly, Socialbakers found that the 25 most engaging brand profiles averaged only 0.07% post engagement – not exactly breath-taking.

I think that low engagement rates on Twitter are a symptom of the ‘Information Overload’ which is present in the digital world we inhabit. Each tweet finds itself wedged between countless others, fighting for people’s limited attention whilst sinking inevitably down fast-moving newsfeeds.

However, I’ve been reassured that you can improve tweet click through rates, so have done some homework. HubSpot suggest tweeting images, posting at peak times and ensuring clarity in tweets.

Day 5:
I’ve been introduced to Dan Barker, a web and online marketing expert with years of digital experience and 11,600 Twitter followers. I want to know why he’s done so well, and from our first exchanges, I get it. He’s hilarious, engaging and insightful. I ask the key to his large following, and he says:

“I have a relatively small following, who stick with me through sheer inertia, rather than through any positive effects of my Twitter usage. Twitter themselves deliberately make it harder for users to unfollow someone than to follow”

Despite his humour, he’s clear about what Twitter offers to him:

And what advice does Dan have for a novice like me?

1. Take a look at the numbers – Twitter has a fantastic analytics platform – simple but useful. From that you can qualify whether what you’re sharing *is* interesting to others, or not so much, and can therefore avoid filling people’s timelines with nonsense.

2. Try to share interesting stuff that other people do not.

It’s clearly Dan’s genuine expertise, valuable insights and likeable personality that people follow him for. It’s equally clear that to capitalise on any genuine likeability I myself possess will benefit me on Twitter.

It’s looking good! 14 more followers since I started a week ago – so a 52% increase – as well as that 133% increase in profile visits and 89% rise in impressions. Maybe I haven’t become a pillar of Twitter society as I wrote 6 days ago, but I have learned a hell of a lot.

Firstly, engage wholly and realise that you must get stuck in to succeed; quantity of engagement is as important as quality. I’ve also learnt how to tweet well, made new contacts and read some great articles. In addition, I’ve developed a Twitter personality, and can post about genuine interests without compromising my business image. Most importantly, I understand Twitter now, and look forward to signing in, sharing and reading; with this enjoyment as a foundation, I can see no way but up for my Twitter experience from now on.

With a love of writing and a Journalism, Media and Cultural Studies degree from Cardiff University, Jack is a Digital Marketing Content Executive at theMediaFlow. He is responsible for the research, ideation and creation of content in a number of forms, including blogs, infographics and feature articles.
Twitter – Website