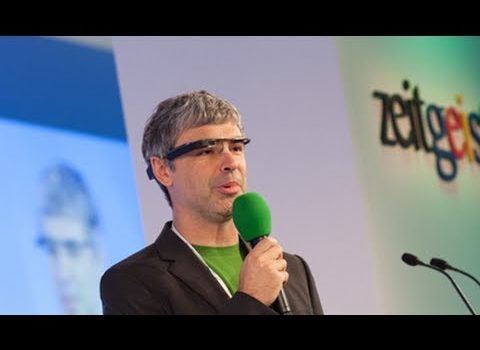 Larry Page: “Search is not just about finding things. It’s about taking actions”

Every year Google looks back to the past and forward to the future with their ‘Zeitgeist’. A few days ago Larry Page, CEO of Google, held his ‘Zeitgeist’ talk in the UK.

Wearing his Google Glass he talked for twenty minutes about where Google is heading. You can see the entire video here, below are some highlighted quotes from the talk.

A few interesting remarks from Page:

“I think that the pace of change is really accelerating.”

“we have an awful lot of products, some of which people don’t seem to care that much about. So we went through and we — we went through kind of a painful process where we shut down or closed over 30 different things.”

“Google+ which is our social efforts, and people are a bit confused about this. I’d say that we think it’s really important that when you’re using Google, you be able to easily share things.”

“And the other part where people are a little bit confused about what we’re doing, that’s the social spine of Google. That means everything in Google gets better by being able to share and have identity and things like that.”

“I think if you used Google from five years ago, you’ll be astounded at how bad it is. Or how bad it was, right? And, you know, search has gotten a lot better.”

“Also maybe in the last week or so, we released this thing called the Knowledge Graph, or Knowledge Panels, we’re calling them, and those actually give you — if you search for “Tesla” now, “Tesla,” then you get the car and you get the scientist, and we know lots of things about them. So, you know, if you search about, you know, a different — a lake or something like that, we’ll know the depth of the lake.”

“And what we’re really trying to do is to really get to the point where we can represent knowledge and we can do much more complicated types of queries.”

“Search also is not just about finding things. It’s really about taking actions”

“Android’s really on fire now, which I probably don’t have to tell you all, and it’s very, very exciting. It’s a big area of focus for us, obviously.”

Oh and one more thing, you know, Larry says “you know” 70 times in twenty minutes…