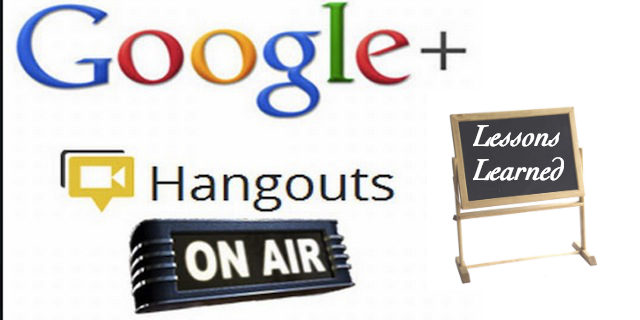 When we talk about events you immediately start thinking about a conference room full of people listening to different speakers, tweeting, blogging and networking. But events can also take place on a different level. Yes, bigger and smaller events with one or multiple tracks, but think about an event anyone can attend, from any place in the world, at anytime they want:through the web.

Webinars have been around for many years already and there are many different suppliers who have learned to perfectionise these types of event where you can register for a webinar and follow what speakers have to say. Take a look for example at how Distilled organises their webinars, very professional and I presume very profitable as well.

But also very time consuming and in some cases costly. After all, you need webinar software, video software and you need to host your video somewhere afterwards as well. Since Google launched Google+ however a whole new way of doing events online: cheap and quick, and sometimes dirty. But very useful as well. A combination between a home video, a radio or tv show and a webinar. Here at State of Search we have done a few live Hangouts already. With success. Today it is time to share some of our lessons learned about Live Google Hangouts with you.

Essentially you can start a live hangout at any time. You just go to Google+ and the ‘start a hangout button’ is already waving at you. But even though it is that simple to get started it is a good idea to prepare for the hangout, both technically as content wise.

As said, a Google hangout works pretty easy, but still there are some things to think about if you are going to do a live hangout.

There is for example the question of invitations. Who do you invite, or better:do you invite someone or just keep it open to the public? If you have speakers it is smart to invite them, but be aware, if you do, you might just accidentally make your hangout invite only and if you are organising an event on which you want people to be a part of your hangout, that is not a smart idea.

Secondly it is wise to test out a few things before actually doing the live hangout. Sound is one thing: do the right people have sound and do you as a moderator know how to mute those who are making too much noise? Another thing is presentations: do they work, and do the presenters know how to show their sheets full screen?

Doing a live hangout is different from doing a ‘regular’ one. There is no editing or doing things twice, you just need to go and do it. When preparing it is advisable as an organiser to ‘be there a bit early’ and make sure everything is working. Also,  if you already start the hangout but are not publishing it yet you already get the code to embed on your site to have the live broadcast there. Get that ready in time, it can be a nice traffic driver.

Next to the technical preparations you will also need to prepare the content. That off course means presentations if you have them, but it is essential to prepare well who is speaking when and on what topic and for how long. You need to know that it is easier for people to listen to an hour presentation in a room than the same time online. They thend to lose attention quicker so you need to have a quick and to the point presentation which will keep them focussed. And not too many of them either.

On online presentations people tend to lose attention quicker. Keep them awake by being to the point and clear.

When it comes to the slides it is also very important to realize that when you are showing the viewers your slides full screen, they are not seeing your face so all they are relying on is your slides and your voice. These are the elements which will keep them awake and listening to your story. You therefor need to really think about your visuals. Remember, they can’t see your facial expressions, so those need to be in the slides. The slides need to tell the story as well. This means not too many bullets, but also not too many vague images. A slidedeck which was a succes at an offline presentation might not be online.

A slidedeck which was a succes at an offline presentation might not be online.

Once the preparations are done you can start the hangout. During the hangout the host, or moderator as you might call him or her, has a very important role, a much bigger role than an offline moderator. The online moderator is more like a talkshowhost than an event moderator. Next to the actual introductions the moderator needs to pay attention to several different elements:

– keeping track of time: isn’t the presenter taking too long with his or her talk.
– Is the sound alright: aren’t there others making noise which will go in the way of presentations and if so, mute them
– Pay attention to questions and quotes on Social Media and in the chat room
– Ping or push the speakers

Communicate amongst each other

It is often a smart idea to have an extra chat channel like Skype or Gtalk open with the speakers to be able to communicate with each other without interfering in the hangout. It can also be a very smart idea to have two moderators, one of which doesn’t even have to be part of the hangout, to make sure all the things are monitored correctly.

When speaking in a live hangout there are the things I mentioned on the preparations you need to keep in mind, but there is more. You are talking to the web here, so articulation is very important, since sound sometimes gets lost, which can be a shame if people miss part of your talk. And remember: because you are on the web it is easier for people to be distracted or even walk out compared to an offline event. 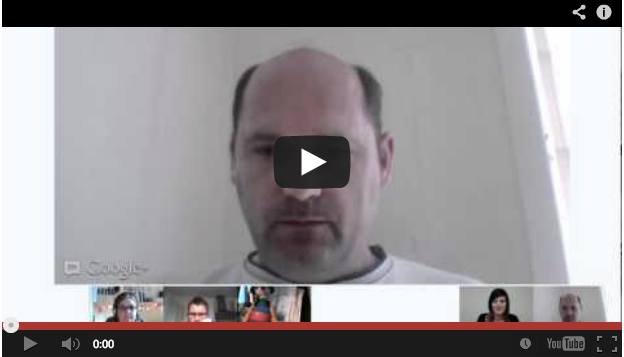 One thing which is really important when you are not the person talking in the hangout at that point is to realise people see you, and when it is a live broadcasted and later published one, not just the ten people in the hangout. So beware not to be picking your nose, rolling your eyes or doing other things which are either distracting or maybe not so pleasant for other people. Remember: the camera is rolling.

Don’t pick your nose when in a hangout, the camera is rolling and people are watching.

One more thing: look behind you

Finally when preparing there is one thing you must not forget. In a Google Hangout you are visible all the time, except for when you share a screen. That means that your hair should look right and you should think about what you are wearing here also, but more importantly: you need to look behind you.

When doing a hangout your webcam is pointed at you. And at everything behind you. Make sure that doesn’t interfere with the image you are trying to get across. Are there no colleagues behind your back making rude gestures? Are you doing the hangout from home? Make sure they are not looking straight into your dirty laundry. And check if there are no mirrors in the camera angle. That might cause some awkard situations as well. 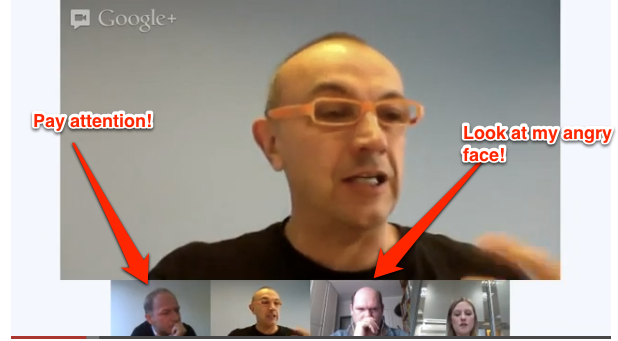 Once the hangout is done, the work isn’t. It will automatically be published to your YouTube page but that is just the rough version. You could choose to download and optimise the video or use the YouTube tools to put in annotations, links, descriptions and more to make it look more professional. Basically it is the work of a search marketer: optimise the video!

These are tips which you can use to make your Google Hangout work as best as possible. We have done several already, you can find them here on our special hangout page. And we are doing another one this Friday! Will you come and join us?