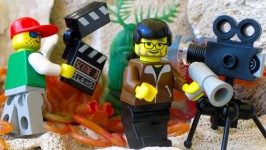 Links, Camera, Action: How to Get More Quality Links from Your Video Content

Apologies in advance for my sudden obsession with video content, but I really can’t emphasise how exciting it has been working on our latest video campaign, #Sk8seeing – Brighton on a Skateboard. Not only have we managed to get some seriously heavy-weight links with it, but we’re also getting them in volume. Lots of links from awesome websites – yep, we’re livin’ the dream!

Perhaps you read my last post, which gave  you “quick & dirty tips for doing video SEO on a budget”. It focused mainly on getting your video produced, and solving the problems of how to host it in a way that best supports SEO. For this post, however, I’m going to show you how to get loads of links with your video, once you’ve made it – I’m going to teach you how to live the dream!

So, you’ve got an idea for your video but it’s nowhere even close to being made. At this point you can still reach out to people that you would like to publish your video on their site – honestly, you really, really can! We found that by getting in touch with the owners of our target sites and asking for their feedback on our idea, not only did we get some great feedback to help us make a better video but we also got their involvement in its creation. Once the video was created and ready to go live, all we had to do was get in touch and say thanks for your input, you can see your impact on the video here – feel free to publish it and brag about it on your blog! Of course, not everyone we contacted wanted to offer their advice, but the ones who did were more than happy to publish the video on their blogs! Yes it takes quite a bit of foresight, but the results are undeniably worth it.

Takeaway: Start getting people interested in the video before it’s even been made.

It’s easy to only think of video SEO as a link-bait tactic – you publish the video on your site, sit back and wait for the links to come flooding in. But don’t forget, video content is still content, which means you can still do content outreach with it. Write a beautifully crafted email highlighting the main concept of the video, and elaborating on why it’s so special. Send the video link to your target site suggesting they publish it on their blog, and don’t forget to include an embed code – that way, you can also keep control of what anchor text they use for the video credit link. Don’t just make it easy for them to publish the video, you also need to suggest angles and stories to go along with the video. Maybe you could even write an introduction to publish with the video so they don’t even have to ‘think’ of a way to justify using it for a whole blog post.

Takeaway: Create a story around the video; give people everything they need to publish your video and justify taking up a whole blog post to do so.

Have a look at the stories currently surrounding the niche of your video and see if you can find a way your video could piggyback off the hype. We actually wrote an email to the local newspaper in Brighton, where we had filmed the video, explaining that something really exciting had been done to promote the destination as a British retreat. Within moments they had called us on the phone to find out more, it was published in the newspaper the next day (obviously not the video itself, but an article about the video) and published (with video and link) on their blog the day after. Brighton council had just opened a new skatepark in an attempt to attract young and creative types to the city – our video was a perfect ingredient for them to use alongside the story in the paper.

Takeaway: Think about the big publications who are desperate for relevant content and news stories – and pitch it directly to them in a way that focuses on timely angles. Boosh!

You know how some people are, they don’t respond well to being hounded or pressured – just think back to your dating days for evidence. With this in mind, sometimes you have to have a little faith in the quality of your video, and let it do the talking for you. Simply get in touch and very nonchalantly let them know about a video that they may or may not be interested in, whatever, you don’t really even care about them and their stupid site anyway. Your email might actually be focused on something they’ve recently published on their blog, casually mentioning the video without any sign of neediness. If they like the video – which hopefully they will because you’re an epic video producer – then they will publish it. Just make sure you keep and eye (stalk) their blog so you don’t miss it when they do!

Takeaway: If your idea and video is good enough, you will get natural links. Make sure you’re monitoring everything and know when someone has done so – it’s important for your reporting.

It’s incredibly important to make it easy for people to link to your video, or embed your video, or share on Facebook etc. And, of course, it’s also very important to be proactive about asking people (except when you’re playing it cool) to share your video – include a clear call to action and make sure to include simple instructions.

What other tactics have you used to when working with video content marketing? Please leave your tips in the comment section below or let me know via twitter.

Latest Post from Ben
Search Engine Optimisation Could Your Images be Harming Your On Page SEO?