A New Way of Linking Announced by Google

Please note the date of the article when reading…

Links have been part of a big discussion forever in SEO. Originally most discussion was about linkbuilding, now the discussion is more about taking links down. Tactics like guest posting are becoming targets for Google and that gives new responses within the search industry. With sites like e-consultancy now going to ‘no-follow’ on guest posts it shows the industry is somewhat panicking.

But now Google is coming to the rescue so it seems. It announces a new ‘SEO friendly way of linking’:  rel=”counts-twice”.

The fact that Google is doing rel=”counts-twice” (we started with it right away as you can see) was discovered by LinkRisk who wrote about it first. They explain the new format like this:

Twice the juice per link

That PR3 off topic blog comment – Thats the equivalent of a PR6 now!
You can’t buy those links! Well now you can! with rel=”counts-twice”

The rel=”counts-twice” tag is going to change the way the SEO industry builds links.

Earn a BBC link – yeah thats good – Earn a Guardian link with rel=”counts-twice” and you are shooting for the stars! The SEO benefit of that link is off the scale!

It might seem like a bold and strange move, but it was actually confirmed by Matt Cutts just a bit earlier: 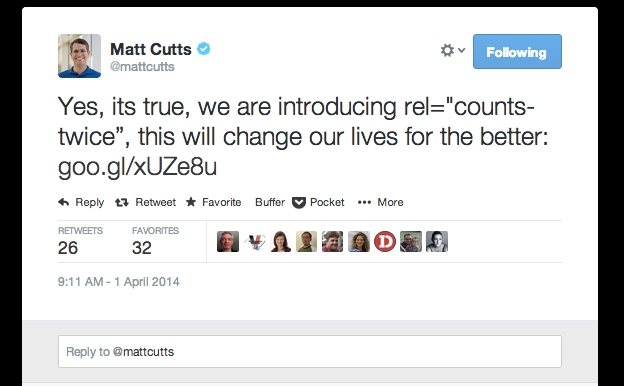 This change is huge. What will be next? Who knows, the way Google is going it could be in any direction.