Marketers: The Terms You Use Are New, the Tactics Aren’t

When it comes to Digital Marketing marketers tend to use ‘hot terms’ for some of the work they do. This can lead to some hilarious conversations at coffee machines within companies when someone from the marketing department tries to impress colleagues. But most of all it’s confusing. A lot of terms after all seem to be the same thing as we’ve been doing for years.

What we’ve been trying to do for centuries in marketing is find the right way to the end customer. Making sure our ‘brand’ is out there and recognised. Trying to make people buy our products in the end using methods which can be described as ‘convincing the world they need to look at you’. The goal has always been the same. Most of the tactics have also been quite similar. Yet the terms we use to describe them tend to differ. Here are a few tactics that seem ‘new’, but really on the term is new.

The term link bait was once described as “A webpage with the designed purpose of attracting incoming links”, simply said: create stuff which will make people link to you.

If you look at the definition of ‘content marketing’ on Wikipedia its this:

“Content marketing is any marketing format that involves the creation and sharing of media and publishing content in order to acquire customers. This information can be presented in a variety of formats, including news, video, white papers, e-books, infographics, case studies, how-to guides, question and answer articles, photos, etc.”

Both Link bait and Content Marketing are actually about doing the same: creating content which triggers, which will make people link, share or act on it.

When ‘link bait’ was big, we needed people to put the links to our website on their websites. People who would trigger the right network. Or as Rand Fishkin would puts it: “Linkerati are internet users who are the most productive targets of link bait.“.

Simply said: that what we publish or put out there is aimed at a specific group of people, the linkerati. An example of a linkerati can be bloggers.

Now in 2014 this last sentence still is valid. Only the “linkerati” can be easily exchanged with what we now call ‘influentials’.

Influentials in marketing are those people within a certain field or industry of which we believe that they are important to spread our message. They influence their peers into either buying our products or at least talk about it. An example of influencers can be… bloggers.

You could argue that ‘linkerati’ are the ancestors of the current influentials. Or maybe they are the same?

A few years ago I would get a lot of e-mails from link builders (I actually wrote about this phenomenon). Most of them in the line of ‘I think the content of our website is similar enough to yours that our visitors would benefit from us sharing links’. Or even simpler: “I found your site on Google and I think we need a link from you’.

Basically a link building tactic was approaching website owners that seem to be in the same ‘area’ and getting them to put a link to you on their website.

Though it still happens most of those type of e-mails have now gone. Or better said: replaced. Even though it has gotten a lot less since we publicly closed guest posts, on a very regular basis I still get a lot of e-mails of people asking to guest post on the site. It differs from me choosing the topic to actual guest posts being sent to me in full.

The goal of these guest posts? Linkbuilding. It’s a different form of exchange, but the essence is the same: link exchange requests have now become guest post requests.

One of the first lessons in SEO is that you should not write content from your own point of view, but from the searchers point of view. What are people looking for when they go to a search engine? And what is it they want to find out?

“Back in the days”, we find this out by doing ‘keyword analysis’. Looking at search terms, looking at what people use, trying to get a grip on what people want and then write content based on that.

Nowadays things really aren’t that different. In the past few years the term “user intent” has been used quite a bit. Simply stated ‘user intent’ stands for finding out what the user really wants. Based on that knowledge we try to craft our message (content) in such a way that it really appeals to them.

This principle is still very much in place. However there are few who actually call it “Behavioral targeting”. Most people now call it “Personalised marketing” or “On-Demand Marketing”.

“Personalised marketing” is known as ‘A website can track a customer’s interests and make suggestions for the future’ (Wikipedia).

Do you see the difference?

The term ’Native advertising’ this year is brought as if it was something completely new. The sponsored content showing up in our Facebook feed for example: revolutionary. Or is it?

“Sponsored Content” has actually been around for a while. In different formats. Whether its sponsored posts on blogs or specific videos or even offline with tv shows produced for one reason only: to get the sponsored message out there.

The essence of the both is the same: give people what they want and add a little ‘advertising’ to it, but most importantly: make it feel natural. 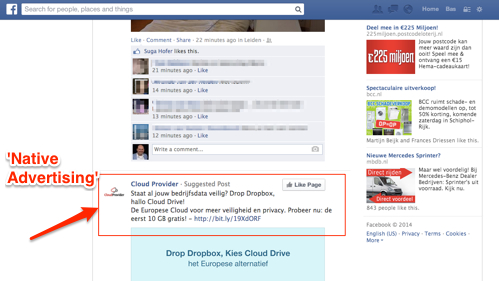 PR has been around for ages. ‘Officially’ it is around since Edward Bernays was pioneering in the 30s. Basically PR (it’s more than that, but that’s the general outlook) is seen as ‘getting press attention’ without advertising. Having the media write about you. Followed by people talking about you on the streets. It’s a proven tactic and one which pr-agencies have been making a living off for decades.

Now a days however you can’t say that anymore. “PR” has a nasty ‘old fashioned’ sound to it. So we needed something else in stead. And why not re-use that what we’ve been doing for decades, add a little ‘word of mouth’ to it and bingo, we have a new term: “Earned Media”.

To sum things up

When you look at the terms we are using and the described terms above (there are many more) you can conclude that yes, in general marketing has changed, but some ways are still the same. We just call them differently. Of course most things do change and for all the terms above you can ‘explain’ how in fact they are different. But the essence is the same.

But I have to say, sometimes I feel like we worry too much about what it’s called and too little about what it does.