Osama Bin Laden killed: how did Google and Bing respond?

Last week I started with a series in which I am looking at the differences between Bing and Google: which one is actually better? After all, Bing seems to be doing well, although there are some doubts about that. I decided to take a look at the both of them based on current events. So “hot stuff” which anyone could be searching on. The question then is: which one of them handles the current affairs the best? Which one offers me the most relevant results and which one is the most user friendly?

Last week the first comparison was made based on the Royal Wedding. There Google seemed to win it based on the quality of the page in general, but Bing did a better job when it came to user friendliness. Today we can already look at another current event which shows differences between the two: this morning news broke that Osama Bin Laden was killed by US Forces. This off course immediately led to many reactions world wide. I took a look at how Google and Bing reacted. This time not with a video, but in text.

I took two different measurement points for this search, the first one being only shortly after the news broke, around 6AM here in Europe, the second about 3,5 hours later, to see the differences.

The starting point: what am I looking for?

On a comparison like this it is good to know what my starting point is, what am I looking for and what am I hoping to find when using Bing and Google? There are a few things I’m looking at:

So we start off early in the morning when the news has just broken. Google Trends doesn’t have any clue of what is going on at that time, but Google does. They have 13,3 million results ready for us, where Bing has 7.09 million. The search giant places a Google News block on top of the results. Bing not surprisingly does the same.

Google brings ‘only’ three major sources and then a lot of related articles after the click. They also show over 51000 realtime search results. That is, they are showing the link to the real time updates, not the updates themselves.

We off course want to know more about Osama so we have to get some information from the search engines about this man. Both Bing and Google give us Wikipedia as the first result after the news. Google does a little bit of a better job by providing us also with sitelinks for Wikipedia. Bing also gives us a result from Answers.com, which does not show up in Google.

Google gives us 5 results with information about Osama: the FBI page, Infoplease, The Anti-Defamation League (ADL), a BBC News page from 2001 and a Global Research page. We sure can find plenty of information about Osama here. Bing also shows us the FBI and ADL and on top of that a page on the Guardian, ABC News, Historycommons, absoluteastronomy and a Frontline documentary page on PBS. It also directs us through to an Amazon page with a biography of Bin Laden. Bing therefore shows us a little bit more.

On the images part it is pretty simple, both search engines give us pictures of Bin Laden. Bing shows a little bit more variety compared to Google.

Videos however is a different story. When it comes to early in the morning Google does not show us any videos related to Osama or his death. Bing does. Two YouTube videos, one MSN Video and one ABC News video. The YouTube videos are irrelevant, but the ABC News Video, which has a “NEW” indication next to it is actually very fresh and a news item about the death of Osama. Well done Bing!

Finally the social aspect. First something I noticed on both search engines, which is not specific for this search, but something more in general. Both Google and Bing do not have a “share” option. Not for a specific result, but also not for the search in general.

When it comes to Bing’s results and social we can be very clear about that: there is nothing social here. No connections, no Facebook results (Why not? They have a deal with Facebook after all!) and no Twitter connection whatsoever.

Google has its social circle results in there. Even though it is pushed down to the bottom of the page, at least it is there.

Overall it again looks like Google and Bing are pretty close to each other. But also again the overall “feel” of the Bing results is better. They seem more up-to-date without them maybe actually being that much more up-to-date.

Check out the entire pages here and be the judge: 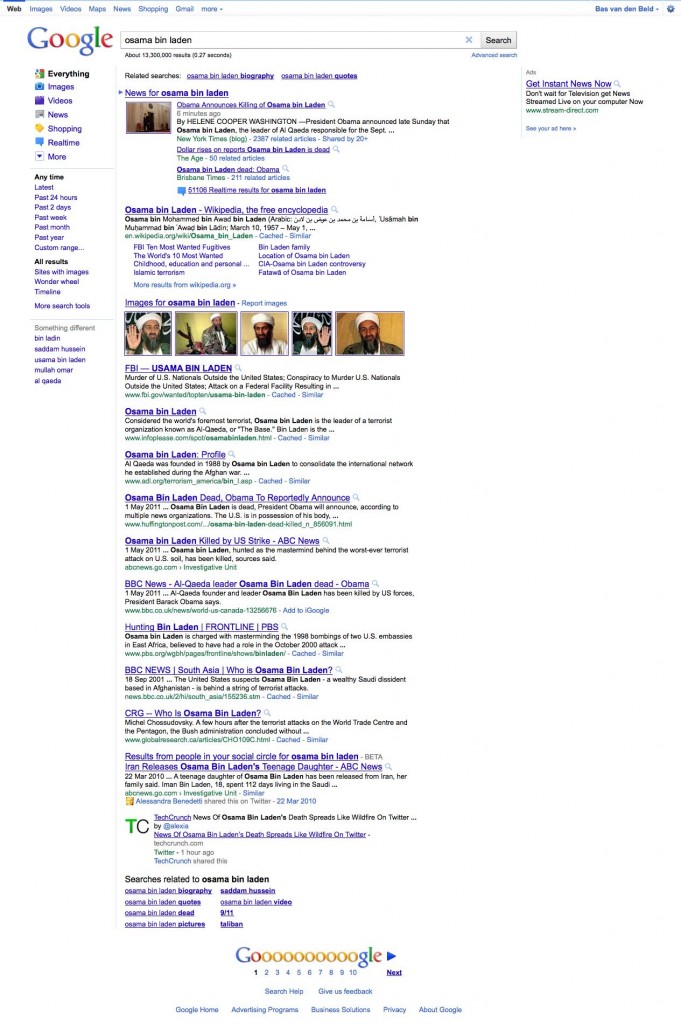 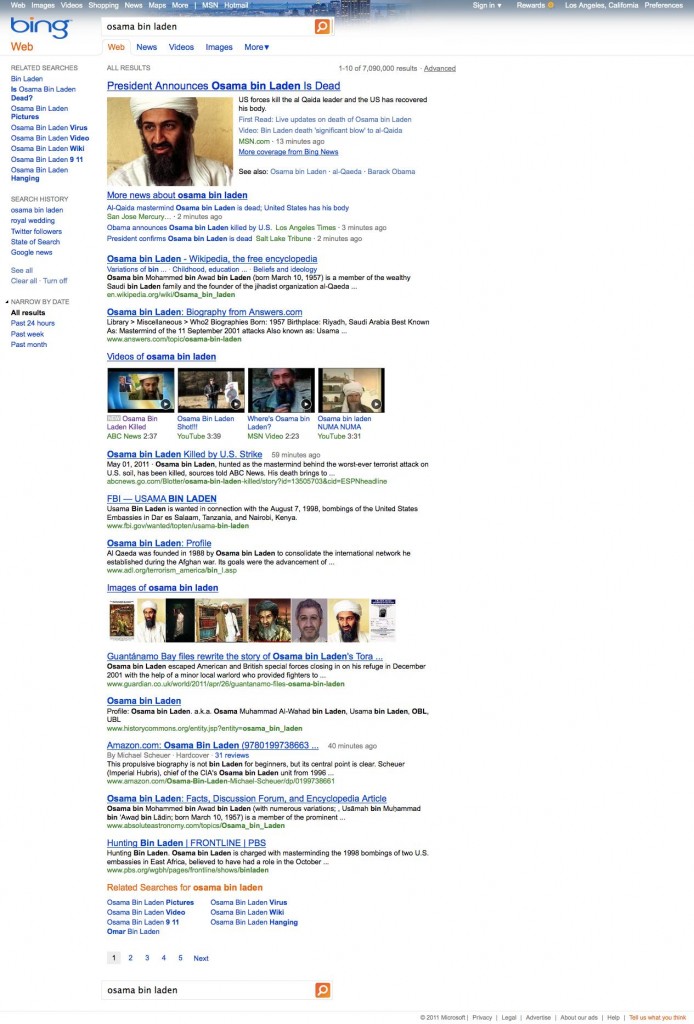 I took another look almost four hours later to see if the engines had changed anything. On both engines the results look similar to earlier this morning. The News-blocks are on top again, followed by the Wikipedia result.

Google still has five news related articles there, even though they are not all the same as this morning. Bing still only has one. But Bing does have the official Whitehouse page, with Obama’s statement on it there, which is a very nice move.

The biggest change definitely is on Bing and has everything to do with videos The “Videos of Osama Bin Laden” now shows four new videos. There is an ABC News video and three different videos with the President’s statement, from CNN, CNBC and Reuters. So Bing did a really good job there. What is interesting is that Bing seems to be placing the length of the video below it, but that actually is not the length, but the time the video was pushed out.

It is weird that Google is not showing any videos, especially because their video service YouTube even opened up a live channel (only available in the US (WHY???)) with live coverage from CBS News and many are uploading videos from festivities emerging from the news. Why didn’t Google do anything with this in their SERPS?

So in this battle, who won? And then I am off course speaking of the battle between Bing and Google. In my personal opinion I get a much better feeling from Bing compared to Google. Even though Bing has nothing Social in it.

The look and feel is much better, with the big image on top. You immediately feel you are “into the news”. Even though Google has relevant information on it, they fail to actually make it really useful for the user.

But the main no-go for Google in this case for me is the lack of videos. I can not understand why there are not more videos there. If you put up a live channel, make sure it shows up in the SERPS.

For me this one goes to Bing. How about for you?