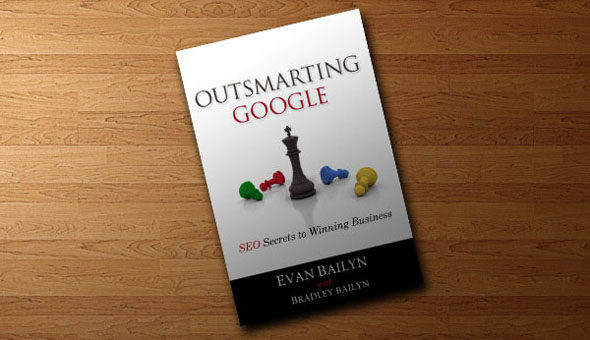 Outsmarting Google is a book that’s been out since 2011, so I’m late with this review. And due to the fast-moving nature of the SEO industry, some parts of the book are expectedly out of date.

In the interests of full disclosure, before I began reading the book I was fully prepared to dislike it. Over the years I’ve developed a mild allergy for what I’d call ‘self-help business speak’. We all recognise this type of hyped-up copywriting when we see it: ‘Killer Strategies to Success’, ‘Hidden Secrets To Become an Instant Millionaire’ – books with such titles are a dime a dozen, and usually worth even less than the paper they’re printed on.

While Outsmarting Google’s title and subtitle aren’t quite as extravagantly worded, they did cause mild alarm bells to go off. Any book that claims to help you outsmart the four-digit IQs at Google, and hints at ‘secrets’ to be revealed, is already making promises it’s unlikely to be able to keep.

So I embarked on Evan Bailyn’s 200-page SEO manual with appropriate skepticism. However, I found that no matter how hard I tried, I couldn’t dislike the book. Quite the opposite – I like it. I like it a lot.

Light on Theory, Heavy on Action

Outsmarting Google is not a perfect book. There are some flaws with it, but these are superficial and do not impact the core message that Bailyn conveys, which is how to do effective SEO. And that message is delivered strongly and concisely, and in such a way that any reader will immediately be able to get started.

The book is light on theory and spends admirably little time on explaining the esoteric dark arts of SEO. Instead Bailyn devotes a chapter to basic SEO concepts such as PageRank and TrustRank, and then dives straight in to hands-on practices that help boost a website’s visibility.

Bailyn demonstrates a realistic perspective of what SEO can and cannot do, and peppers the book with healthy doses of common sense. For example he spends two pages explaining PageRank and then bluntly states that “PageRank doesn’t matter that much any more”.

When he follows that up a few paragraphs later with “Google considers search engine optimizers to be spammers” and makes it clear that Google’s edicts are not always to be taken at face value, I knew this was a kindred spirit who has a keen understanding of the realities of good SEO.

The core message of the book is about creating great content, and lots of it. Bailyn’s ‘Nuclear Football’ method, elaborated on in the fifth chapter, is basically about trying to find relevant long tail keywords and writing strong content targeted at those keywords, complemented with a dose of high-quality linkbuilding.

This is not exactly a SEO secret in 2013’s digital landscape, but when this book was written in early 2011 it was definitely an approach few SEOs advocated.

Like I said before, it’s not a perfect book. It does have some flaws, such as its superficial approach to on-site optimisation. Basically Bailyn says that all the technical stuff you need to worry about is the page title and the URL, which I think is a little too easy – but, in essence, not factually wrong, providing your web developer has done a decent job.

Technical SEOs such as myself are easily wrapped up in XML sitemaps, duplicate content challenges, and index status reports, but for the type of reader Bailyn targets with Outsmarting Google that sort of information is unnecessary and probably needlessly confusing.

Some aspects of technical on-site SEO are mentioned, but not until the chapters that talk about optimising for Bing and Yahoo. Also, the social media chapters are a bit out of date, and some of Bailyn’s predictions about the future of SEO could do with a revision.

But at its core this is a book that works. At a bit over 200 pages it reads quickly and easily, and everyone who follows the book’s precepts will get a good start at doing SEO that is, in this day and age, still effective and results-driven.

I wanted to dislike Outsmarting Google, but I ended up liking it a lot. Should Evan Bailyn decide on an updated second edition, I’d definitely recommend it to everyone looking to get started with SEO. Even the current mildly dated version is a strong piece of work, and would not go amiss on a digital marketing bookshelf.

As far as actionable, ‘get up and get going’ SEO books go, this one’s a winner.